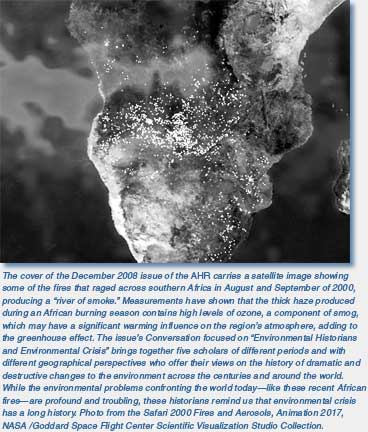 In the last issue of the American Historical Review, we revisited an important historiographical debate, that of the “Crisis of the Seventeenth Century.” The December 2008 issue, which should soon be in members’ mailboxes, engages in a similar exercise in retrospection, this time looking at one of the most important and influential articles ever published by this journal, “Gender: A Useful Category for Historical Analysis,” by Joan W. Scott, which appeared in the December 1986 issue. The current issue also contains an article dealing with the modern history of human rights in the European context. And it concludes with the third annual AHR “Conversation,” on “Environmental History and Environmental Crisis.” As always, we have our extensive book review section, which leads with several featured reviews.

The issue’s sole stand-alone article, “From the Vienna to the Paris System: International Politics and the Entangled History of Human Rights, Forced Deportations, and Civilizing Missions,” is by Eric D. Weitz of the University of Minnesota. Weitz argues for a fundamental shift in political conceptions in the last third of the 19th century: from traditional diplomacy to population politics, from mere territorial adjustments to the handling of entire population groups defined in terms of ethnicity, nationality, or race (or some combination thereof); in short, from the Vienna to the Paris system. He examines two transnational regions, the borderlands of Eastern Europe and Africa, as the main sites of this transition. The history he recounts shows that the origins of new standards of human rights were more problematic than we normally assume. For thinking about populations in terms of protecting threatened groups and their rights also entailed the very same kinds of thinking that enabled and indeed promoted forced deportations. He concludes that while post-World War II human rights have largely been individualistic in orientation, the widely touted notion of self-determination, based on the concept of population homogeneity, points to the after-effects of the Paris system into the twenty-first century.

The AHR Forum, “Revisiting ‘Gender: A Useful Category of Historical Analysis,’ by Joan W. Scott,” contains six essays which consider the enduring influence of what is undoubtedly one of the most widely read and cited articles in this journal’s history. Five essays are by historians from different fields; the sixth is a response by Joan Scott. Joanne Meyerowitz, who teaches at Yale, looks at Scott’s piece in the context of US history in “A History of Gender.” Heidi Tinsman, from the University of California at Irvine, approaches it from the field of Latin American history in “A Paradigm of Our Own: Joan Scott in Latin American History.” A response from the perspective of Eastern European history is provided by Maria Bucur, of Indiana University, in “An Archipelago of Stories: Gender History in Eastern Europe.” A consideration from a European historian of the Middle Ages, Dyan Elliot, of Northwestern University, is offered in “The Three Ages of Joan Scott.” And Wang Zheng, of the University of Michigan, and Gail Hershatter, of the University of California at Santa Cruz, give us an Asian perspective in “Chinese History: A Useful Category of Gender Analysis.” The Forum concludes with “Unanswered Questions,” by Joan Scott, where she reflects upon her original piece, its genesis and reception, responds to some of the points raised by the participants in this Forum, and offers some further comments on the “usefulness” of gender as a category of historical analysis.

The AHR Conversation, now in its third year, is an experiment in the publishing history of this journal. Its aim is to assemble a group of historians and others to discuss a topic of general concern using the technological means at our disposal to create a set of give-and-take exchanges which captures as much as possible the liveliness and openness of a conversation. In 2006 the topic was “Transnational History.” Last year’s subject was “Religious Identities and Religious Violence.” For 2009, “Environmental History and Environmental Crisis” was the theme of the conversation. I served as the moderator of the e-mail exchanges which began in June and continued into October among five environmental historians: Richard C. Hoffmann, an early modern and medieval historian at York University, Toronto; Nancy Langston, a US historian at the University of Wisconsin, Madison; James McCann, an African historian at Boston University; Peter Perdue, a specialist in China at Yale; and Lise Sedrez at California State University, Long Beach, whose field is Latin American history. We are currently thinking about a theme for next year’s Conversations. Suggestions are welcome.

The February 2009 issue will include, among other things, the text of the Presidential Address by Gabrielle Spiegel and Part I of an AHR Forum on “The International 1968.”

Robert Schneider (Indiana Univ.) is the editor of the American Historical Review. He can be reached a raschnei@indiana.edu.