Rethinking America Once Again: Report on the NHC Summer Institute 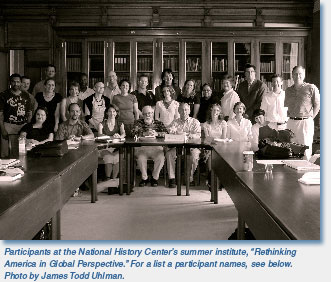 In 2005, we were co-directors of a summer institute for college teachers on the theme “Rethinking America in Global Perspective,” which was sponsored by the American Historical Association and the National History Center and held at the Library of Congress. Encouraged to apply again to the National Endowment for the Humanities, which had funded the 2005 institute, we did so; and this past summer the institute met again in Washington, this time, however, under the sponsorship of the National History Center. The support of its chair, Wm. Roger Louis, its administrator, Miriam Hauss, and her aide, Chris Culig, made the month-long institute both pleasurable and highly productive. We also benefited greatly from the support of the Community College Humanities Association, the George Washington University History Department, the John W. Kluge Center, and the staff of the Library of Congress itself.

The institute traces its origins back to the OAH La Pietra Report of 2000 and to a tsunami of conferences and publications aimed at encouraging the internationalization of the teaching of United States history, including the recent AHA publication, Globalizing American History: The AHA Guide to Re-Imagining the U.S. Survey Course, edited by Peter Stearns and Noralee Frankel in 2008. The latest institute was held from June 15 to July 12, 2008. The directors and the 25 participants listened to 10 plenary speakers, discussed a body of common readings, and conducted individual research at the Library of Congress and other nearby archives and depositories.

We began by exploring pre-Columbian Americas with Charles C. Mann, the author of 1491. We then moved on to the seaborne empires of the 16th and 17th centuries, guided in this endeavor by Elizabeth Mancke (University of Akron). Philip Morgan (Johns Hopkins Univ.) also took us offshore, providing the African and Caribbean backgrounds to the era of the American wars of independence. The transnational context of the new United States was further illuminated by Eliga Gould (Univ. of New Hampshire), who emphasized just how entangled with European empires the history of the new nation remained for much of the 19th century. Carl Guarneri took on the task of comparing American expansion with other settler societies in the 19th century, thereby providing another way of understanding America in a global perspective. He was followed by Donna Gabaccia (Univ. of Minnesota) who urged that we shift our attention from immigration history to the multidirectional history of migrations, thereby telling the story of America in a much more complex and interconnected manner.

The first half of the institute was oriented toward the Atlantic. We then turned to the Pacific, assisted by Paul Kramer (Univ. of Iowa) to understand the consequences of the Spanish-American War and the imperial turn for American policy and consciousness. John Gillis followed with a discussion of the geopolitics of American history, emphasizing the importance of understanding the nation’s metageography and how this has affected its stance toward the world. Alan Dawley (Coll. of New Jersey) was to have dealt with rise of America as a world power, but his untimely death deprived of us of his presence. In his place, Thomas Knock (Southern Methodist Univ.) discussed the contradictions of Woodrow Wilson’s internationalism in a manner that Dawley would surely have appreciated. The month’s presentations concluded with Penny von Eschen (Michigan), who explored globalization at the level of cultural production and consumption.

We had restructured the institute somewhat having taken into account comments by participants in the previous institute. The focus was now shifted slightly toward the 20th century, but every effort was made to emphasize the continuities that have marked the New World’s interactions with other parts of the globe since the 15th century. Not surprisingly, a good deal of time was spent on America’s ambiguous relationship to empire. In 2008 applications for the institute’s 25 places more than doubled, reflecting not only the current interest in teaching world history but the number of globalizing projects already under way among the new generation who made up the bulk of our applicants. Our participants were not confined to Americanists but included historians of China, the Middle East, Latin America, and Europe. There was a literature scholar, a women’s studies specialist, someone from cinema studies, and an anthropologist in our ranks. Our discussions were invariably enlivened by the experience of several persons who either now teach or have recently taught American history in Africa, Turkey, Canada, and Switzerland. Our group extended beyond the continental United States to Hawaii.

What struck us most forcefully as directors was the degree of sophistication that was present in this very diverse group of people. It is clear that the internationalization of American history is taking root among new and emergent scholars, is operating on different levels, and is coming from diverse directions, from outside as well as inside the country, from north as well as south, west as well as east. Three years earlier there were few if any general treatments of the subject available for teaching purposes. Now we have a choice of well written texts, as well as collections that make the seminal literature easily available. Some of our participants have already published in the multitude of journals open to transnational themes.

Members of our 2005 institute have been very active in organizing panels through the Community College Humanities Association and the National Council for the Social Studies, as well as at the annual meetings of the AHA and the OAH. The most recent group was inspired by their example and are planning their own future meetings. The most immediate impact will be in the classroom, however. In the 2008 institute, we expanded the time given to teaching methods and philosophy. Participants exchanged syllabi and provided one another with bibliographies through a weblog. Our outside speakers generously offered their PowerPoint slides to the group at large, while the superb staff of the Library of Congress opened to all of us a treasure trove of print, film, and sound sources found no place else in the world.

It is hard to imagine a better location for this particular NEH institute. Our meeting place in the Woodrow Wilson Library of the Jefferson building looked across to the now thoroughly barricaded Capitol Building. Screaming motorcades reminded us constantly of the power that circulated around us. Washington itself has become a global city, complete with a plethora of cultural institutions, expanding universities, and public service organizations (which now include the National History Center itself). We were perfectly positioned to observe America’s interaction with the world. With the Pentagon just across the river and K Street so near, there is no escape from the realities of the nation’s overweening wealth and power. On the other hand, the Library of Congress is one of the most cosmopolitan institutions in the world, containing the planet’s largest multilingual, multicultural collections. There could have been no better illustration of America’s stake in the world and the world’s stake in America than this place, at this time, on the eve of an election of such epochal significance.

Three years ago, one of our fellows, David Loebsack, a political scientist from Iowa, announced at the end of the institute that he had made the decision to run for Congress. He won his seat in 2006, which he successfully defended this fall. It is not clear that we can claim that our institute was the determining factor in his decision, but we are convinced that institutes like this one do have an impact, not only on the participants themselves, but on all the citizens who will be encouraged to see their lives through world perspectives.

—Carl Guarneri is professor of history at Saint Mary’s College of California.

Participants in the Summer Institute