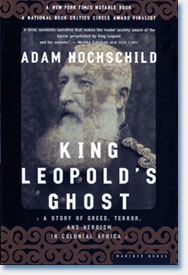 The AHA’s Theodore Roosevelt-Woodrow Wilson Prize will be presented to the awardwinning author, Adam Hochschild, on January 2, 2009, at the plenary session of the 123rd annual meeting to be held in the Trianon Ballroom of the Hilton New York from 7:30 p.m. In deciding to confer the honorific award on Hochschild, the AHA’s Council focused on his “extraordinary writing about historical subjects,” especially his book, King Leopold’s Ghost (published in 1998 by Houghton Mifflin and as a paperback by Mariner Books), which delineated the horrors of the Belgian king’s rule in the Congo. The AHA Council agreed that the Roosevelt-Wilson Prize—awarded to individuals not in the academy who made a significant contribution to the discipline of history—should be conferred upon Hochschild for the far-reaching effects that King Leopold’s Ghost had upon the teaching and writing of history and for the way in which it affected politics and culture in Belgium and abroad. Bringing into light the hidden specters of Belgium’s colonial past, Hochschild’s book triggered the first open national discussion of imperial injustices and eventually spurred other investigations and led to an official apology being tendered by the Belgian government, underlining the quiet power that a well-researched and well-written history text could exert in the public sphere.

Adam Hochschild, born in New York in 1942, was educated at Harvard University where he received a BA cum laude in 1963. After a stint with the military, Hochschild worked as a reporter with the San Francisco Chronicle and as a writer and editor of Ramparts magazine. He was a cofounder (and editor for a time) of Mother Jones, and taught journalism in universities in California. He served as a member of the national presidential campaign of George McGovern in 1972. His first book, Half the Way Home: A Memoir of Father and Son (1986), an autobiographical memoir, received critical acclaim, with Michiko Kakutani of the New York Times praising it as “an extraordinarily moving portrait of the complexities and confusions of familial love.” The Mirror at Midnight: A South African Journey (1990) and The Unquiet Ghost: Russians Remember Stalin (1994) followed in quick succession. Finding the Trapdoor: Essays, Portraits, Travels (1997) a collection of Hochschild’s many essays, received the PEN/Spielvogel-Diamonstein Award for the Art of the Essay. Hochschild’s latest book, published in 2005, Bury the Chains: Prophets and Rebels in the Fight to Free an Empire’s Slaves, examined the abolitionist movement in 18th-century England and put on center stage the heroic efforts of antislavery activists who were not as well known as Wilberforce. It won the Los Angeles Times Prize for the best book in history. He received many other honors as well, including the Duff Cooper Prize, the J. Anthony Lukas Award, the Spamm Prize, the Lionel Gelber Prize, and the Lannan Literary Award for Nonfiction.

But it was his study of King Leopold’s predatory imperialism in the Congo that had the greatest impact on the public sphere and for which the AHA is conferring the Roosevelt-Wilson Prize upon Hochschild. As the nominating document put it, “His text drew its unusual power by organizing the wealth of historical particulars into a dramatic narrative of the individuals whose beliefs, actions, and characters both created the tragedy and gave us the means to know about it.”

Adam Hochschild will be talking about the writing and reception of his book in the session entitled “History, Museums, and the Politics of Memory: The Congo in Belgium after King Leopold’s Ghost” (Session 152 in the Program), to be held in the New York Ballroom West of the Sheraton New York on Sunday, January 4, 2008, at 2:30 p.m.