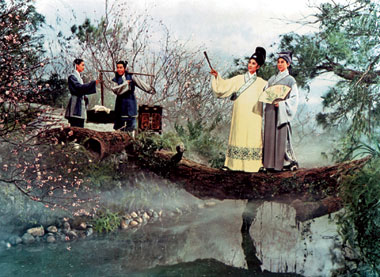 I wonder sometimes why I took so long to make movies a big part of my writing and teaching. I have loved movies since I was a child and began writing movie reviews for newspapers when I was still in high school. I was born and raised in the small fishing town of Ap Lei Chau in the southern tip of British Hong Kong. The mid-20th century was a time of turmoil in China and the Cold War was escalating in Asia. But life on the island was simple and cyclical; after school I went to work at my father's small machine shop or played soccer, and on weekends I watched third-run Cantonese-dialect movies at a local theater. Without knowing it at the time, though, my moviegoing experience was enmeshed in colonial politics and the global contest for hearts and minds of people in Asia. Situated right next to "Red China," Hong Kong became a principal ideological battleground between the "Free World" and the "Communist Bloc" in Asia. This explains why, for three decades before the 1980s, the Hong Kong movie community was sharply divided between those who were politically affiliated with China and those who were close to Taiwan ("Free China").

Hong Kong had been the center of dialect movies since the beginning of the last century. In the mid-20th century, Cantonese movies were mostly small-budget, studio-bound tragic romances, family dramas, or costume pieces. They catered to moviegoers like my family: poor or lower middle-class Cantonese, who made up the vast majority of Hong Kong's population. Cantonese movies were wildly popular among local people because they were simple and affordable, and focused on familiar stories and subjects intimately related to the everyday life of the British colony. They portrayed family conflicts and social problems, but never touched on issues that were sensitive to the colonial authorities, such as racial problems or political corruption. In fact, I don't recall ever seeing, when I was growing up, a white person in Hong Kong movies.

At the same time, in resonance with the colonial education system, which discouraged teaching about China after the 1840–1842 Opium War (when the British seized Hong Kong), Cantonese movies generally refrained from commenting on contemporary life in China. If filmmakers did venture to comment, they were most likely affiliated with pro-Beijing studios and tended invariably to be ambivalent. For example, the social drama My Son, Ah Chung (1950)—starring a precocious Bruce Lee—captures the sound and vivid color of a working-class neighborhood at a time when Hong Kong was undergoing a painful shift from a long-established entrepôt economy to a focus on export-oriented consumer industries in response to the U.S. embargo against China. Unemployment and social displacement were becoming rampant. Set against this background, the movie tells the story of a family struggling to stay together in the face of poverty, prejudice, and gang violence. And it ends with a memorable sequence in which the family, carrying their luggage, walks along the railway track toward the border. Are they going to China to escape the inequalities of the colony? What is China like? The movie is silent on these questions.

Not all the movies I saw were Cantonese. Once or twice a year, when my parents took us to enjoy dim sum at the central business district, we watched Hollywood or Mandarin pictures at the grand movie palaces. We wore our best clothes and behaved our best for these special occasions. Since we didn't understand English or Mandarin, we had to depend on the Chinese subtitles to figure out what was going on up on the screen. (We were able to read the subtitles because Mandarin—which had been made the national language in 1912—is closest to the standard writing system that all educated people can read regardless of the dialect they use for speech.) A first-run Hollywood movie was probably the most expensive popular entertainment at the time, and served for the most part a wealthy and well-educated clientele that included the large expatriate community. With the benefit of hindsight, I now know that many of the Hollywood extravaganzas that were box-office sensations in Hong Kong such as William Wyler's Ben-Hur (1959), Robert Wise's The Sound of Music (1965), and James Hill's Born Free (1966) were outstanding Cold War products aiming to showcase the material prosperity, advanced technology, and free-spiritedness of the United States. Their fantastic special effects and spectacular display of consumerism and capitalist lifestyle sold to audiences around Asia the superiority of the American way of life.

In fact, I remember how shocked I was when I saw the Chinese people of Hong Kong represented as backward and childlike in contrast to the affluent, sophisticated, and modern British and American expatriates in Richard Quine's 1960 romance The World of Suzie Wong. Despite being enchanted by one lovely sequence that shows the lively congestion of sampans and junks and a fancy lunch at a floating seafood restaurant outside my hometown, Ap Lei Chau, the skewed images grated. So, when Suzie Wong (played by Nancy Kwan), a prostitute who consorted with American servicemen taking time off from fighting in Vietnam, tells her condescending and arrogant American lover, Robert Lormax (played by William Holden), "I am not what you think I am," I felt she was speaking for many of us in the audience.

The 1960s and the early 1970s were the "Golden Age" of Mandarin cinema in Hong Kong, even though only a small fraction of its population spoke Mandarin. This was made possible by the "Free Chinese" Shaw Brothers Studio, whose carefully formulated production strategy—with emphasis first on costume opera dramas and, after 1966, on martial arts pictures—was in tune with the Cold War politics in the region. Although its products were not as opulent as the Hollywood movies, they cost less to attend and had far better production values than the cheaply made Cantonese movies. In fact, my parents mostly took us to Mandarin movies when we made our infrequent visits to downtown, both because they found it more affordable and because they were enamored with what they called the "Chinese glamor" of the Shaw Brothers' stars. But what stuck in my head was the glamorized China projected in Mandarin movies. Set in ancient China and resplendent with traditional symbols, Li Hanxiang's opera romance The Love Eterne (1962), for example, tells a doomed love story of a poor scholar and a beauty. Their purity and devotion to each other against oppression evokes a China of an idealized past and a sense of nostalgia that imbues the film with an almost dreamlike quality. It was enormously popular among Chinese audiences around the world, many of whom had recently fled the mainland to escape the political turmoil there. Historical movies like The Love Eterne gave the diaspora an imagined cultural tradition with which they could proudly identify. Director Ang Lee once remarked that he made Crouching Tiger, Hidden Dragon in part to pay homage to the memory of so many of the Shaw Brothers' movies he watched while growing up in Taiwan in the 1960s.

As I would learn later, the Shaw Brothers' costume dramas and martial arts pictures lent support to the Cold War propaganda efforts of the exiled Nationalist government, which strove to portray itself to the pan-Chinese world as the bastion of Chinese culture and therefore the only legitimate government of China, preserving the Confucian tradition of moral values in opposition to the Communists' efforts to eradicate the cultural tradition in the mainland. Hong Kong became, therefore, a significant part of Taiwan's global crusade against Communist ideology.

In the late 1960s, Hong Kong was roiled by social discontent and an eight-month-long riot, which had itself been directly influenced by the violence and political turmoil unleashed by Mao Zedong's Cultural Revolution in China, and which threatened to bring down British colonial rule. Hong Kong gradually recovered from the challenges. Mandarin movie companies made adjustments, producing mostly martial arts pictures set in either the distant or recent past and adding more violence and blood-gushing scenes in the name of giving vent to the anger and discontent of young audiences. The most prominent exceptions were the martial arts classics Fists of Fury (1971) and The Way of the Dragon (1972), both starring Bruce Lee, who had recently returned from the United States. It was arguably the first time white men appeared in a Hong Kong production. Peter Baker played the Russian strongman Petkov, while Chuck Norris took the role of the American Karate warrior Colt; both Petkov and Colt were bad guys who were beaten and humbled by a Chinese character. Set in semicolonial Shanghai of the 1920s and 1930s, Fists of Fury was also the first Hong Kong production to openly evoke an obvious anti-imperialist sentiment showing a sign outside a park in the foreign-controlled areas that read "No Chinese and Dogs Allowed" being kicked to pieces, in mid-air, by the hero as the onlookers cheered on. I remembered the audiences roaring with applause. Both movies were phenomenally successful at the box office.

I went to college in Toronto in the early 1970s. When I returned in 1978, Hong Kong was booming economically. In China, Deng Xiaoping rose to power with the promise of launching China to economic modernization and national revitalization. The following year Deng visited the United States. As relations between the United States and China were normalized, a chapter of the Cold War in Asia seemed to come to a close. With the rapid geopolitical changes in the region, Mandarin movies went downhill, while Cantonese movies blossomed with a new generation of artists committed to creating a new local identity.

My moviegoing experiences in Cold War Hong Kong have come to shape my work as a teacher and author. I came to recognize that movies, even those with apparent entertainment values, are never ideologically innocent. They are intricately and often ambiguously intertwined with history and politics. Carefully historicized, they are wonderful materials to illuminate the complexity of our past.

Poshek Fu is professor of modern Chinese history at the University of Illinois at Urbana-Champaign. He is the author of several books, including Passivity, Resistance, and Collaboration: Intellectual Choices in Occupied Shanghai, 1937–1945, and Between Shanghai and Hong Kong: The Politics of Chinese Cinemas.