History education stands at a critical juncture. Decisions on issues ranging from curriculum to professional development to assessment are being made at the federal, state, and local levels with insufficient input from historians. The National History Center, which already has established visibility on Capitol Hill with its successful series of Congressional Seminars, has launched an initiative that will enable historians to follow and engage in the making of history education policy—especially legislation and regulations relating to schools, teaching, teachers and students at all levels. The center envisions its role as a convener, bringing professional historians into conversations with policy makers and the media in the nation's capital.

The NHC hardly stands alone in this enterprise. Indeed the launching pad for this enterprise was a small conference co-sponsored by the American Historical Association, the National Council for the Social Studies, the Organization of American Historians, and the National Council for Education in the Disciplines. Hosted by the Newberry Library in October, this meeting brought representatives of these and other institutions together with researchers in the field of history education to help the National History Center define an agenda that would complement existing efforts. 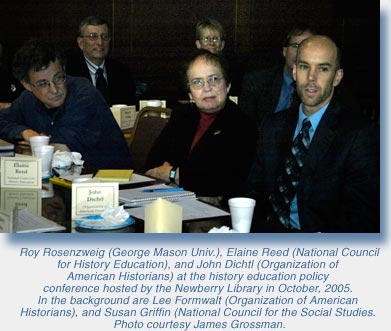 Intended to focus on such issues as curriculum, pedagogy, professional development, and assessment, the Newberry meeting took its opening cues from the online forum based on Robert Orrill and Linn Shapiro's essay, "From Bold Beginnings to an Uncertain Future: the Discipline of History and History Education," in the June 2005 issue of the American Historical Review. Presentations by Carol Berkin (History, Baruch College), Robert Bain (Education, University of Michigan), Geno Flores (California Department of Education), and Suzanne Wilson (Education, Michigan State University) helped to focus the discussions.

What emerged was a clear sense that the relationship between research, policy, and practice was a crucial nexus that has not yet received rigorous and sustained attention. Scholars working in postsecondary settings have given little thought, for example, to whether history education would benefit from inclusion in "No Child Left Behind" programs. The clamor in public policy circles for assessment has scarcely engaged historians as researchers or teachers despite implications for what we teach and how we teach it. What the National History Center must—and can—bring to the table of policy and public discourse, is an approach that eschews advocacy in favor of careful research. Just as the NHC's Congressional Seminars have begun to stimulate and nurture policymakers historical interest and awareness on a variety of issues from social security to congressional reform, this initiative will establish the contours of what policy makers and media need to know about historical context and history teaching to frame policy and public discourse.

As a next step, therefore, the National History Center has begun to establish a small working group to explore the historical context of such issues as how students learn; assessment, certification, and accreditation; how history has been taught in the recent past; and the controversies over the role of history in public policy debates. This working group will present its work through a major publication, at a 2007 Washington, D.C., conference attended by various stakeholders and policy makers, and through briefing papers.

—James Grossman is vice president for research and education at the Newberry Library and a member of the Planning Committee of the National History Center.