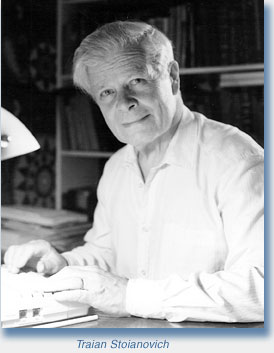 Traian Stoianovich, distinguished professor emeritus from the history department of Rutgers University at New Brunswick, died on December 21, 2005. He was 85 years old. Born in Graješnica, Macedonia, he earned his undergraduate degree from the University of Rochester, served for three years until 1945 in the United States Army, took an MA at New York University and then a doctorat at the Université de Paris in 1952.

He is survived by his wife of 60 years, Marcelle Stoianovich, a noted French artist residing in Paris, France; a son, Christian Stoianovich of Los Angeles, California, a screenwriter; and a daughter, Diana Revson of Greenwich, Connecticut, development director of the Meserve-Kunhardt Foundation and mother of Traian's two grandsons, Tripp and Alex, who brought him boundless joy in his last decades.

Second in his life only to family was Traian Stoianovich's commitment to academic work, in a truly global context. At Rutgers, where he began his career in 1955 as an instructor, he rose quickly through the ranks. Over the years, he enjoyed visiting professorships at the University of California at Berkeley, Stanford University, New York University, Sir George Williams University in Montreal, and the Maison des Sciences de l'Homme in Paris, but he always returned home to Rutgers. Even in his final months he traveled frequently from Connecticut to join colleagues for lunch, check his mailbox, and pick up books requested at the library. A new laptop was on order for him when he died.

He was an extraordinary teacher and colleague, although not for the faint-hearted or light-headed. Stoianovich's lectures were masterpieces of logical construction, intricately laced with examples and asides. In every classroom, he unabashedly put into practice his pedagogical conviction that the purpose of teaching was not to cover but to uncover. Truth be said, sometimes even his colleagues were a bit baffled by his interventions in scholarly exchanges but always we had the firm sense that the shortcoming was in our understanding of the matter, not in his imaginative grasp of reality. Long before deconstruction gained a name, he mused upon the relative absence of clocks in the squares of most Balkan cities and explained how it was that people in the region cared less precisely than their western counterparts about the time of day or night. Communal sounding of time with horns complicates the social implications of the issue, he observed (A Study in Balkan Civilization, 1967, pp. 183–90). His scholarship always informed his teaching. Students who came late to a lecture were treated to a brief history of the concept of lateness and its variations over the centuries by class, gender, and ethnicity.

The Balkan Civilization masterpiece was followed a decade later by an even bolder theoretical work, French Historical Method: The Annales Paradigm. Having maintained close ties with his doctorat mentor Fernand Braudel, even as their research interests veered in opposite geographical directions, Stoianovich was uniquely positioned by depth of scholarship and frame of philosophical mind to write this book-length assessment of where the entire corpus of Annales work had been, where it might go, and where it ought to go. He grappled with the Marx, Freud, Annales triad in fascinating ways, true to form in discovering and uncovering, but never covering the questions he raised. In later conversations, Stoianovich opined that the Annales school might have been eclipsed by its own success, losing some of its ability to stay at the fruitful margins of historical inquiry.

He returned with renewed passion to the study of his cherished Balkan peoples, to the mundane and obscure detritus of their material culture from which he teased meaning, and to their philosophical treatises long forgotten or never known, at least among modern intellectuals. The outpouring of published scholarship continued in these years, amounting in a lifetime to over 200 publications, with editions and translations in English, French, Greek, Italian, and Serbo-Croatian. As he neared retirement, Stoianovich felt the need to make clearer connections among the "residues," as he was wont to call them, of his intellectual explorations. With wonderful ease, his prefaces to the four-volume collection, Between East and West: The Balkan and Mediterranean Worlds (1992–95), survey his endeavors and find them satisfying.

During this time, in 1994, his magisterial Balkan Worlds: The First and Last Europe appeared. A preface authored by Kevin Reilly, one of Stoianovich's early graduate students, accurately tells readers that this work may be read as a fuller-length version of his 1967 Balkan Civilization: replete with graphs, charts, diagrams, and maps; filled with stunning, unexpected insights; and driven by an overarching theoretical framework. He saw the historical record as the geologist might see a great gorge, with strata to be explored but unlike the physical scientist, the layers he uncovered were ordered thematically, not chronologically: earth culture, biotechnics, technology, society, economy, and personality. These thematic layers interacted to shape cultures and population systems, the subjects of the latter part of this far-reaching study. More was in progress but Traian Stoianovich's death means that his intellectual journey has come to an end, with yet more to uncover, as he would have wished.