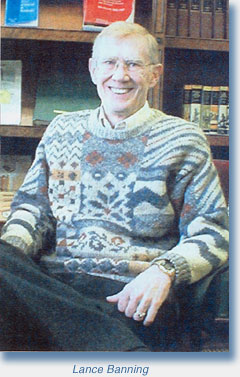 Lance Banning, one of the leading interpreters of America's founding generation, died January 31, 2006, at age 64, after complications from lung surgery. A professor of history at the University of Kentucky (UK) since 1973, Lance Banning built a distinguished career exploring how political ideology evolved from the American Revolution through the creation of the Constitution and beyond. He broke new ground in 1978 with his first book, The Jeffersonian Persuasion: Evolution of a Party Ideology, which opened up a new perspective on the critical conflict between Republicans and Federalists in the 1790s. When it came to understanding the intellectual touchstones of the creation of the Republic, Banning had few peers. He grabbed national attention with his penetrating analysis of James Madison. His book, The Sacred Fire of Liberty: James Madison and the Founding of the Federal Republic, published in 1995, became a finalist for the Pulitzer Prize, and won the Merle Curti Award in Intellectual History. In addition to three dozen articles and essays that ranged from meditations on republicanism to the Jefferson-Sally Hemings affair, he published two other books that helped map the intellectual terrain of the early Republic: Jefferson and Madison: Three Conversations from the Founding (1995) and Conceived in Liberty: The Struggle to Define the New Republic, 1789–1793 (2004).

While at UK, Banning won honors as a University Research Professor and a Distinguished Professor in the College of Arts and Sciences. He directed more than two dozen doctoral dissertations and placed many of his students in successful college and university teaching positions. While all of them showed a telltale love for the history of the founding generation, none became simply a Lance Banning clone. As a mentor, Banning insisted on originality in thinking, and style and grace in writing—the very trademarks of his own work. He loved his graduate students, opening his home to them for countless cookouts and his heart to their individual needs.

Known for his wry smile and clever, soft-spoken wit, he will be remembered as truly special because of his willingness to tolerate opposing views of the world. Banning was no moral or intellectual relativist—far from it. He was a man of firm, carefully considered convictions. He had a keen analytic mind, which, in part, explains why he could so brilliantly understand James Madison. But as certain as he could be about his own interpretations of history or particular positions to take in departmental matters, he always courteously granted others the right to disagree. As he said to me with a smile on more than one occasion, "Dan'l, you have every right to be completely wrong." He reveled in the honest give and take of ideas. Like most of us, he tended to think his ideas were better than most, but he insisted that we were all entitled, even encouraged, to see things differently. Academic freedom is a frequently invoked mantra on campuses everywhere but rarely lived. Lance lived it. He was a rare colleague, a close friend, and a good man. He will be deeply missed.

Lance Banning is survived by his wife, Lana; son, Clinton; and his mother and brother. Contributions can be made in honor of Lance to the Lance Banning Graduate Research Fellowship Fund in the History Department, University of Kentucky, Lexington, KY 40506.