Historians Teach More and Larger Classes, but Make Less Use of Technology

Historians teach more and slightly larger classes than faculty in most other disciplines, but make less use of technology, according to the 2004 National Study of Postsecondary Faculty.

Alongside the valuable data on who teaches history in two- and four-year colleges and universities and what they earn that we reported in the March 2006 Perspectives, the new study also provides important insights into some work practices of historians, and allows us to see them in the larger context of academia.

Some of the findings merely reinforce common perceptions—that undergraduate classes at liberal arts colleges are much smaller than in other institutions, that senior faculty spend significantly less time teaching undergraduate students, and that historians make less use of technology in their teaching than other disciplines. But the report also offers evidence that may seem slightly less obvious—that an unusually high proportion of historians identify teaching as their primary activity, that graduate courses in the history are among the smallest in academia, and that there are only modest generational differences in the use of technology in the classroom.

Despite the common perception that the history discipline is unusually wedded to research and monographic scholarship, most history faculty identified their principal employment as teaching. Almost 86 percent of history faculty reported that teaching was their main activity at the school. Just 3.6 percent reported their principal activity was research, while 6.4 percent indicated it was administrative work, and 4.1 percent reported it was some "other" activity (Figure 1). 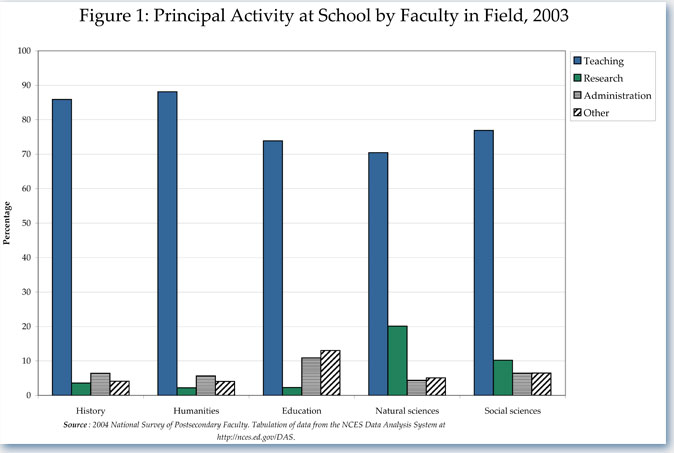 While we cannot say whether these perceptions lead to or follow from actual work patterns, the study does clearly show that history faculty teach more and larger classes than faculty in most other disciplines.

On average, historians in academia taught 2.4 courses in the fall 2003 term. This compares to an average of less than 2.1 classes among faculty in all fields. Among faculty employed full-time, historians have the 11th highest teaching load (among 26 disciplines in the survey), with an average of 2.8 classes in the term, as compared to 2.5 classes for faculty in all fields. This lags behind vocational fields such as computer science and business, and a few of the other humanities fields, such as fine arts, philosophy, and English. 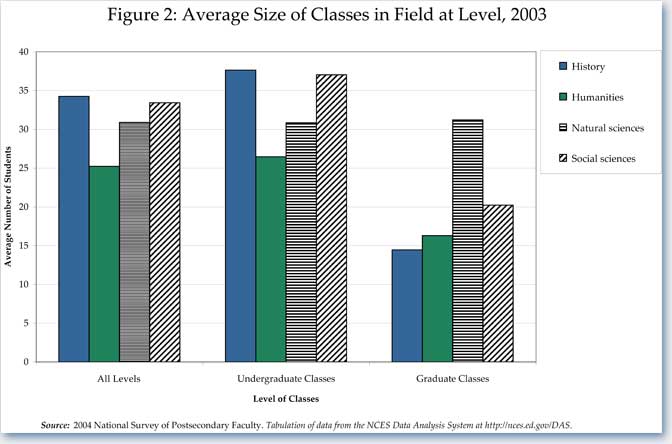 Like the differences in the number of classes taught, the number of students in those classes varied significantly depending on the type of institution. Of course, there are still very profound differences between the history class sizes at different types of institutions. At four-year colleges with doctoral programs, undergraduate history classes had an average of 53.8 students. In contrast, undergraduate classes at four-year programs at institutions without doctoral programs averaged 26.9 students per class, while classes at two-year programs averaged 27.5 students. Not surprisingly, the smallest average undergraduate history classes were at liberal arts colleges, with 21.4 students.

Obviously not all instruction takes place in a formal classroom setting. The data indicate that history faculty provide slightly more individual instruction (supervising students and independent study) than faculty in other fields. Among faculty employed full time, more than 40.5 percent of historians reported that they provided some individualized instruction. More than half of historians at the full professor level provided this kind of instruction. This is a slightly larger proportion than in other fields, where 38.6 percent of full-time faculty reported some individual instruction.

Despite the smaller graduate class sizes and added individual instruction, historians reported a slightly larger average number of student contact hours than faculty in other fields. History faculty reported an average of 270 student contact hours per week (these and other figures in this section have been rounded off). Although this was slightly more than 16 hours above the average for all fields (253 hours), history lags well behind the health sciences—which average over 380 hours—and the social sciences, which average between 276 (in economics) and 311 (in sociology).

Beyond the questions of who (and how many) are being taught in history classes, the survey also provides some useful evidence on pedagogical practices. 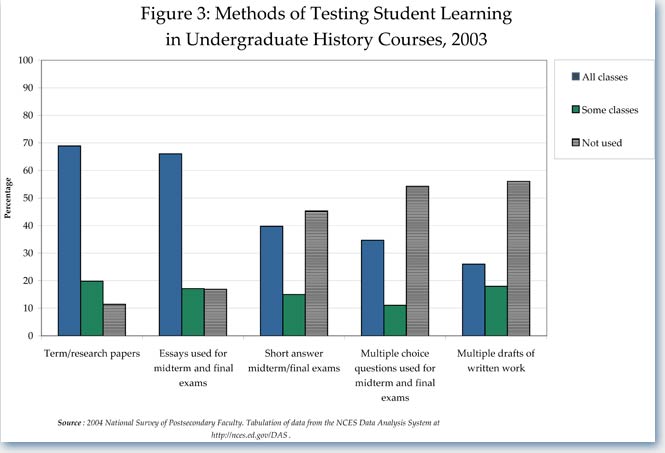 The survey also provides useful information on the different ways faculty use technology in their teaching. Contrary to what one might expect, historians are quite similar to faculty in other disciplines in their use of the World Wide Web for teaching, and in their use of e-mail to remain in contact with their students.

While 39.2 percent of the history faculty indicated that they use web sites "for any instructional duties" (Figure 4), this was just a tiny bit below the average among faculty in all fields, where 39.7 percent reportedly use web sites for their teaching. As one might expect, faculty in fields that tend to make more substantive use of computers as part of their regular work were more likely to make use of a web site for their teaching. 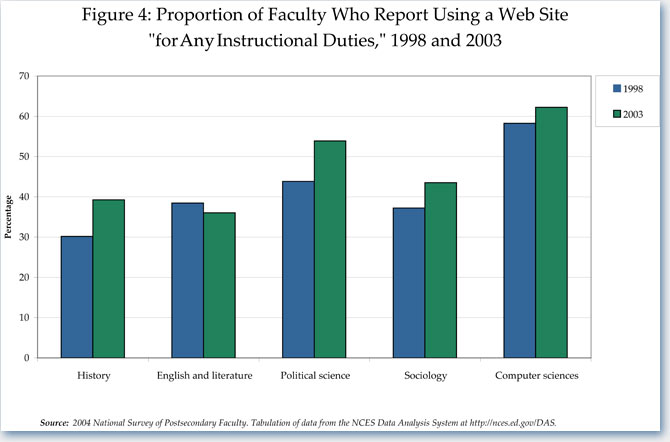 This use of web sites seems to be a modest improvement since 199,8 when just 30.2 percent of the faculty said they used the Web for any of the classes they taught. There was a slight change in the wording of the question that makes direct comparison a bit risky, but this does indicate some improvement. Needless to say, the question was not even considered for the survey conducted in 1993.
While many faculty in the field report that e-mail is a mixed blessing as a means of staying in contact with students, the vast majority in the discipline now do so, as 82.4 percent said they use e-mail to stay in touch with their students. This is actually a bit higher than among faculty in other fields, where 72.4 percent said they allocated some screen time to their students.

What is perhaps more surprising is the large amount of time spent e-mailing students—just a bit over three hours per week for full-time history faculty. Notably, however, since history class sizes are a bit larger than average, historians seem to spend slightly less time on e-mail on a per-student basis than faculty in other fields (Figure 5). 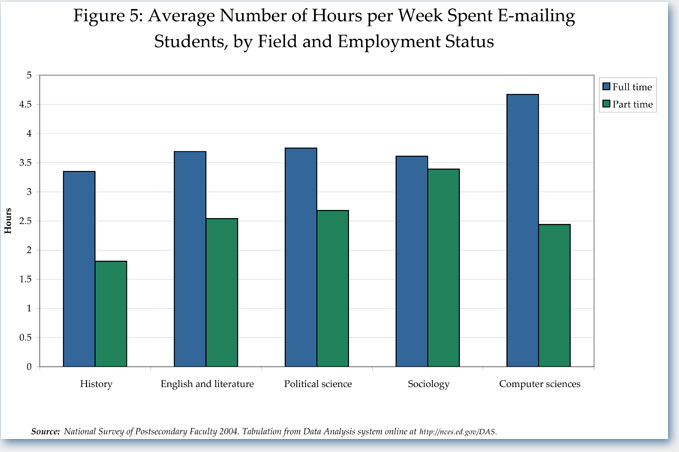 Although more of them use the technology, younger faculty actually spent slightly less time in e-mail contact with students. When we limit our analysis just to full-time faculty, we find that faculty under the age of 45 spend an average of 3.1 hours per week in e-mail contact with their students, while faculty between the age of 45 and 65 spent 3.6 hours in e-mail contact with students.
These figures do not factor in the amount of time junior faculty have to spend just getting on top of their first syllabi and lectures, in addition to the work of getting the publications needed for tenure. Nevertheless, this does suggest less of a generational difference than one might expect.

Even though most faculty consider teaching to be their principal work activity at their institutions, this can hardly belie the fact that schools often make other demands on their faculty's time. Once again, historians seem to be a bit more engaged than faculty in other disciplines. There is a marked difference between history faculty employed full and part time (Figure 6). Full-time history faculty estimated that they spent an average of 46.6 hours per week in paid tasks (teaching, class preparation, research, and administration) at the institution and an average of 1.4 hours per week in paid tasks outside the institution (including consulting, working at other jobs, and teaching at other schools). These faculty estimated that they spent an additional 3.6 hours per week in unpaid tasks at the school (such as "club assistance, recruiting, or attending institution events") and another 2.4 hours in unpaid professional service activities outside the institution. 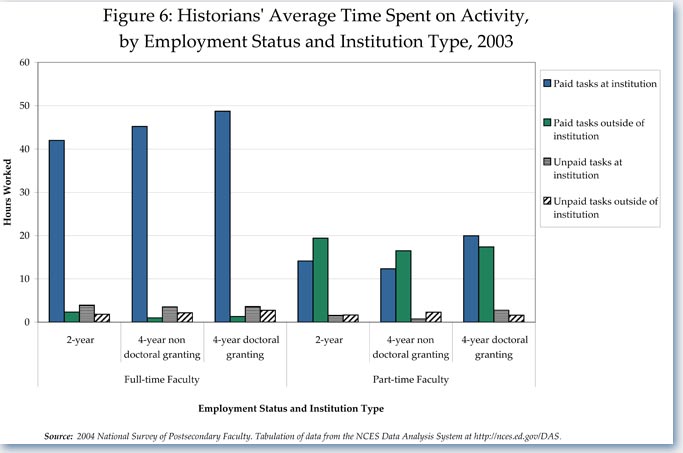 Alongside the undercompensated employment at the institution, historians employed full time seem to provide an unusually large amount of unpaid service outside the institution. The 2.4 hours spent in service activities outside the school is the third largest of any discipline in the survey and more than a half hour in that activity. In this historians only lag behind the fine arts and are actually ahead of fields like law and education that notionally place a greater premium on service.

Finally, even though the numerical data suggest that teaching constitutes the bulk of the historian's job on campus, it would be foolish to deny that publications are still highly prized in the profession. The study does offer some information about the number and range of publications by historians, but unfortunately the way the questions were posed makes the results of limited utility for our field.

For instance, in asking how many books a particular historian has published, the survey questionnaire lumps together all types of books—monographs, textbooks, and trade books. So we can report clear differences between historians at different ranks—full professors had published an average of 3.2 books, associate professors 1.6, and assistant professors 0.7 in their careers, for instance—but we cannot measure some of the important differences in the types of books published.

—Robert Townsend is AHA's assistant director for research and publications.