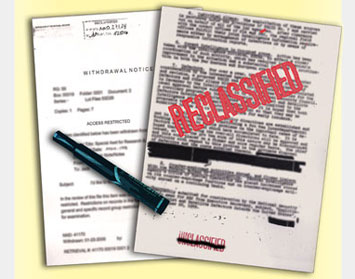 On February 21, 2006, a front-page story in the New York Times reported that for nine years the CIA, U.S. military and intelligence, and other federal agencies have secretly been withdrawing from public access and at times reclassifying thousands of pages of National Archives and Records Administration (NARA) records. NARA quickly responded to the story as well as the requests made several weeks earlier on behalf of independent historian Matthew Aid by the National Security Archive (NSA) in conjunction with the National Coalition for History, Public Citizen Litigation Group, and the Society of Historians of American Foreign Relations. Archivist of the United States Allen Weinstein immediately placed a moratorium on the program and initiated an audit of federal agency actions that are documented to have resulted in some 55,000 pages of records being removed from NARA's open shelves.

In late January, Matthew Aid, who is currently a visiting fellow at the National Security Archive, and representatives of several historical and government openness organizations met with NARA officials to discuss an ongoing reclassification program that Aid had discovered through his wide-ranging research in intelligence, military, and diplomatic records at NARA. Aid had found that the CIA and military agencies had reviewed millions of pages, at an unknown cost to taxpayers, in order to sequester documents from collections that had been open for years, but that the agency felt had been improperly released. Aid's discoveries confirmed what Steven Aftergood, editor of the Federation of American Scientists' Secrecy News, had long suspected was going on. In a Slate magazine article published in March 2005 (http://www.slate.com/id/2114963/), Aftergood wrote that he believed that "in the late 1990s government agencies took to scrubbing public records at the National Archives and elsewhere, pulling untold thousands of public records for ‘review' and possible reclassification." At the time, however, a NARA official challenged the accuracy of Aftergood's claim. According to informed sources, the reclassification activity began as Aftergood had contended—late in the 1990s—but its scope widened during the Bush administration and the survey of records is scheduled to continue until 2007.

During the January meeting, NARA officials were informed that many of the documents Aid found missing from NARA's holdings were in excess of 50 years old. Amazingly, some of the documents impounded by the CIA had already been published in the State Department's historical series, Foreign Relations of the United States (FRUS). According to Aid, other documents (copies of which were provided to NARA) also had appeared in microfilm sets marketed by a private distributor, and still others had been declassified elsewhere and "undoubtedly are in the research files of hundreds of historians and scholars." What should be a concern to every historian who may possess one or more of these 55,000 documents is that under current law anyone who possesses one or more of these documents might be in technical violation of the Espionage Act (see related story).

As a result of the meeting, NARA officials agreed to look into the matter. A formal letter from the meeting participants was forwarded to NARA in which the petitioners collectively requested that the Information Security Oversight Office (ISOO) conduct an audit of the reclassification effort and publicly report on its findings. After sampling some of the 55 documents provided by the historian Aid, ISOO chief William Leonard concluded that at least 16 of them, in his opinion, were improperly being withheld. Relevant congressional committees were also copied on the correspondence, prompting Representative Christopher Shays (R-Conn.) to announce that, in part because of the concerns raised by historians and scholars, his House Government Reform Subcommittee on National Security will hold a hearing on classification policy on March 14, 2006.

After the New York Times story appeared, NARA announced that an "official investigation into the matter was underway." According to the NARA statement (http://www.fas.org/sgp/news/2006/02/nara022206.html), an audit will be conducted by ISOO to determine the exact number of documents that have been withdrawn, whether there is authorization and justification for the withdrawal, and the appropriateness of the reclassification action. The audit is expected to take approximately 60 days. Archivist of the United States Allen Weinstein also expressed concern when he stated, "Inappropriate declassification can subject our citizens, our democratic institutions, our homeland security, and our interactions with foreign nations to potential harm. . . . The American people expect and deserve nothing less and the National Archives is determined to fulfill its role in this process."

Shortly after the release of the NARA statement, the National Security Archives published a report that included a sampling of the documents that Aid discovered had been pulled from NARA's shelves (see http://www.gwu.edu/~nsarchiv/NSAEBB/NSAEBB179/). As readers can see, these documents concern such innocuous matters as the State Department's map and foreign periodicals procurement programs on behalf of the U.S. intelligence community or State's open source intelligence research efforts during 1948. Aid and others believe that some of the documents have apparently been sequestered "because they were embarrassing," such as a complaint from the Director of Central Intelligence about the bad publicity the CIA was receiving from its failure to predict anti-American riots in Bogota, Colombia, in 1948 or a report that the CIA and the rest of the U.S. intelligence community badly botched their estimates as to whether or not Communist China would intervene in the Korean War in fall 1950. According to a press statement released by the National Security Archives, "It is difficult to imagine how the documents cited by Aid could cause any harm to U.S. national security."

To justify the reclassification program, officials at CIA, Justice, and military agencies argue that during the implementation of Executive Order 12958, President Clinton's program for bulk declassification of historical federal records, many sensitive intelligence-related documents that remained classified were inadvertently released to NARA, especially in State Department files. Even though State Department History Office historians who compile the FRUS volumes and other researchers had been combing through and copying documents from those collections for years, the CIA and other agencies compelled NARA to grant them access to the open files so they could reclassify documents. According to NARA officials, the CIA was alerted that many of the impounded documents had already been published, but the agency ignored these arguments and impounded the documents anyway.

The CIA contends that no documents have been "reclassified"; instead these withdrawn records simply were never "properly classified." William Leonard, director of ISOO, states that while this line of argument may be technically correct, others would conclude that the reasoning seems strained.

In the weeks that followed the initial story, the Historical Advisory Committee of the Department of State issued a statement in favor of the Archivist's actions: "The Advisory Committee] supports the commitment of the Archivist of the United States to maintain a balanced approach to the release of public records and upholds the public interest in having archival records available while recognizing the importance of protecting national security. The Committee endorses the Archivist's request for a moratorium on withdrawal of records from the open shelves at the National Archives and Records Administration."

The very day that the Advisory Committee passed its resolution, NARA convened a "summit" of federal agency representatives to discuss issued related to the systematic withdrawal. Following an hour long meeting the agencies unanimously agreed to support the moratorium and to work toward creating new procedures for the review of materials. In the mean time, historians and scholars look forward to seeing the results of the ISOO audit.

—Bruce Craig is director of the National Coalition for History. He can be reached at rbcraig@historycoalition.org.