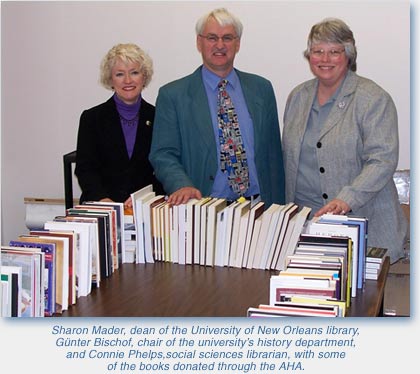 In January 2006, soon after the conclusion of the annual meeting held in Philadelphia, the AHA arranged to ship several boxes of new history books to universities that had been affected by Hurricane Katrina, which devastated many regions in September 2005. The books had been received from the publishers who had participated in the exhibition at the annual meeting. Instead of taking back all the books they had brought with them, the publishers' representatives generously agreed to donate a substantial number of books to the AHA to be passed on to the universities that had been struck by the hurricane.

The books were sent to history departments at Loyola University, the University of New Orleans, Tulane University, and Xavier University of Louisiana, all in New Orleans. The books helped—though necessarily in a small way—to rebuild personal libraries of faculty members, but the bulk of the donated books went to the university libraries.

"Your books could not have come at a more propitious moment," declared Günter Bischof, the chair of the history department at the University of New Orleans, in a letter to the AHA's Council. He also pointed out that despite all the dislocations (five of the faculty members were still displaced) the department had resumed teaching, and added, "your generous gift has been a ray of light in an otherwise dreary city."

Jonathan Rotondo-McCord, chair of the history department at Xavier University, writing on behalf of the department, expressed his thanks and said that the books "will be a substantial complement to our library holdings in several historical areas." The donation was, he added, "both a gesture of solidarity and a concrete step assisting us in this challenging time of rebuilding and renewal in New Orleans.

Tulane University faculty member Richard Latner spoke for many like him (whose home libraries were destroyed or decimated) when he wrote, in response to the book donation, to say "To have access to even a few new works in my field is a help, and perhaps even more, a much appreciated gesture of concern and support by my profession."