Editor's Note: Professor R. R. Palmer, a former president of the AHA, passed away on June 11, 2002. The following is a brief memoir of his life written by his son, Stanley Palmer, professor of history at the University of Texas, Arlington. R. R. Palmer received his PhD from Cornell University in 1934, and during his career taught with distinction at both Princeton and Yale, and presided as dean of arts and sciences at Washington University, St. Louis. Professor Palmer served as the AHA president in 1970. A full obituary is being prepared by Prof. Isser Woloch of Columbia University for publication in an upcoming print issue of Perspectives. Professor Palmer delivered his presidential address at the AHA annual meeting in Boston on December 28, 1970. 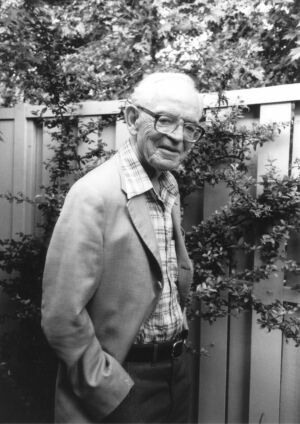 Robert R. Palmer, professor of history at Princeton and emeritus from Yale, died peacefully at home on June 11, 2002 at Pennswood Village in Newtown, Pa. He was 93.

Known professionally as R. R. Palmer, Palmer was a historian of modern Europe specializing in 18th-century France. He was the author of eight books and translator of five. His writings have been translated into seven languages, including Persian and Chinese. His best-selling textbook, A History of the Modern World (1950, 9th ed., 2002, coauthored with Joel Colton since the 2nd edition), has been widely used for more than a half a century in both high schools and universities. His two-volume Age of the Democratic Revolution: A Political History of Europe and America, 1760–1800 (1959, 1964), won the Bancroft Prize and the American Council of Learned Societies Special Prize. The book established Palmer as a pioneer of the contemporary field of comparative Atlantic history.

Palmer's other publications included Catholics and Unbelievers in 18th-Century France (1939), Twelve Who Ruled (1941), and The Improvement of Humanity: Education and the French Revolution (1985). Teachers and students still use Professor Palmer's Rand McNally Atlas of World History, first published in 1957 and in print in updated editions.

Palmer's career earned him many honors, including service as president of the Society for French Historical Studies (1961) and the American Historical Association (1970). He was an active member of the American Philosophical Society and the American Academy of Arts & Sciences. He held visiting professorships at the Universities of, Chicago, Colorado, and Michigan, and at the University of Califomia at Berkeley. In retirement at Princeton University, he was a guest scholar at the Institute for Advanced Study. He was the recipient of several honorary degrees in the United States as well as in Europe. Italy's Accademia Nazionale dei Lincei awarded him the Feltrenelli Prize in 1990 in recognition of his lifetime scholarly achievements.

Robert Roswell Palmer was born in Chicago on January 11, 1909. He attended that city's public schools, and at the urging of his teachers competed for a city-wide Latin prize, winning a full scholarship to the University of Chicago. There he studied with Louis Gottschalk and graduated with distinction in 1931. Another scholarship took him to Cornell where he studied with Carl Becker and received his PhD in 1934.

Palmer's talents brought him an instructorship at Princeton University in 1936. When poor eyesight barred him from active military service, Palmer spent World War II in Washington, D.C., where he put his intellectual skills to work for the War Department. He was a proud supervisor of and contributor to a project that resulted in the postwar publication of two volumes, Organization of Ground Combat Troops (1947) and Procurement and Training of Ground Combat Troops (1948). After the war he returned to Princeton where he taught for three decades and authored seven of his books. At age 43 he was named Princeton's Dodge Professor of History (1952-63). Here, he met and married in 1942 Esther Howard, daughter of Princeton economist Stanley E. Howard. In his university teaching, Palmer was a popular but demanding teacher who could be impatient with sloppy thinking and personal puffery. Over the years Professor Palmer mentored many graduate students who are now enjoying celebrated careers of their own.

He began the latter part of his academic career by assuming administrative duties as Dean of Arts and Sciences at Washington University, St. Louis 1963-1966. Subsequently, he returned to his first loves, writing and teaching, accepting at age 60 a professorship at Yale University, from which he retired in 1977. Palmer returned to Princeton where he was a guest scholar at the Institute for Advanced Study. For the last several years the Palmers lived in Newtown, Pennsylvania. Robert Palmer is survived by Esther, his wife of 59 years, a son Stanley and his wife, Elizabeth, of Arlington, Texas, and their children Vanessa, David, Sonia and Ingrid; a son Richard in California; and a daughter Emily and her husband Keith Gawlik of Boulder, Colorado. A Memorial Service to remember Palmer will be held on Friday, November 1, 2002, at 2:00 p.m. in the Princeton University Chapel, Princeton, N.J.