Voting Rights in the United States

"It is wrong—deadly wrong—to deny any of your fellow Americans the right to vote in this country,” President Lyndon B. Johnson declared in the wake of “Bloody Sunday,” a day of brutal encounters in Selma, Alabama, between peaceful civil rights activists and police in 1965. The protest in Selma was just one in a series of voting rights protests that took place across the South in the mid-20th century. After the end of slavery in the United States and in the wake of Reconstruction, when the 15th Amendment prevented states from denying men the right to vote based on “race, color, or previous condition of servitude,” southern states imposed new laws that erected immense barriers to voting for African Americans. Literacy tests and poll taxes helped reverse many of the political gains won after the Civil War. White southerners also resorted to outright violence, including lynching, as a way to intimidate African American voters. 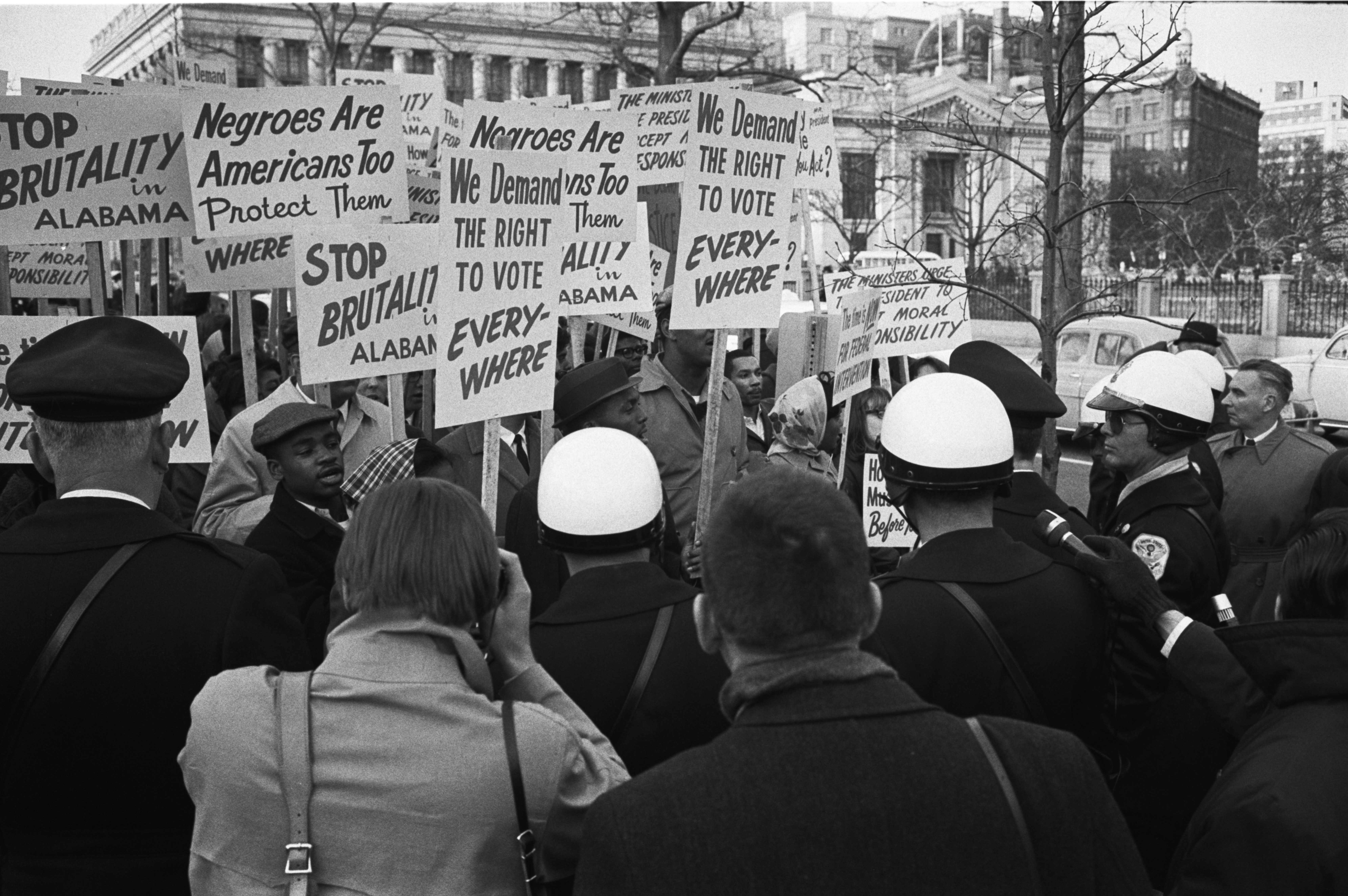 In 1965, Black protesters gathered outside of the White House to demand the expansion and protection of their voting rights after “Bloody Sunday.” Library of Congress/Warren K. Leffler, 2014645538

African Americans struggled to end this regime. Those who moved north as part of the Great Migration in the 1910s and 1920s became an essential part of Franklin D. Roosevelt’s New Deal coalition. Civil rights activists mobilized to build pressure on southern states and on the US Congress, and voting rights became a central goal for the Civil Rights Movement that blossomed in the 1950s and early 1960s under the leadership of figures such as Martin Luther King Jr.

The federal government finally took action following the confrontation in Selma. With Lyndon Johnson in the White House, Congress passed the Voting Rights Act of 1965 (VRA), whereby the federal government committed to protecting the voting rights of all Americans, regardless of race. The legislation prohibited the use of literacy tests and required certain states and local governments to obtain preclearance for any changes to their voting laws if they had a demonstrated pattern of denying voting rights. The legislation also established a formula for how jurisdictions subject to preclearance requirements would be identified.

The VRA enabled the federal government to step in to prevent states from making policy that kept people away from the polls. It complemented the Supreme Court’s one man–one vote rulings between 1962 and 1964; among other things, Baker v. Carr in 1962 and Reynolds v. Simms in 1964 ensured that states could not create districts that gave heavily populated urban areas the same representation as sparsely populated rural areas.

The VRA worked. The reforms of the mid-1960s were incomplete, with many issues still left on the table, but the trajectory was clear. In Mississippi, the state with the worst track record of race-based voter suppression, the percentage of eligible African American voters jumped from 7 percent in 1965 to 67 percent by 1969. The number of black elected officials in states where the federal government stepped in to enforce the VRA increased from about 72 in 1965 to over 1,000 by the mid-1970s.

The promise, however, was never fulfilled. By the early 1980s, a new generation opposed to African American political participation was resurrecting the old bromide of “voter fraud” in what would eventually become a successful attack on the VRA. A generation of conservative lawyers, many of whom cut their teeth in the Reagan White House (including future Supreme Court justice John Roberts), developed arguments that would be deployed by conservatives for gradually restricting the federal protections enacted in the 1960s.

The VRA enabled the federal government to step in to prevent states from making policy that kept people away from the polls.

This legal strategy relied on false claims of widespread voter fraud to justify greater restrictions on voting throughout the nation. This is nothing new. Politicians have ginned up anxieties about voter fraud since Reconstruction in order to roll back suffrage. These warnings are often not grounded in reality. According to a 2017 report by the nonpartisan Brennan Center, incident rates of voting fraud were between .0003 percent and .0025 percent, hardly enough to sway an election. In other words, the drive to protect elections has been used as a cover for curtailing the ease of voting.

After Republicans took control of the House in the 2010 midterm elections, Republican state legislators accelerated a drive to implement new voter restrictions. Their efforts culminated, and received legal legitimation, with the Supreme Court’s Shelby County v. Holder decision in 2013. This landmark decision struck down the VRA’s preclearance formula and the requirement that the federal government had to approve of changes to election law in municipalities with a record of discrimination. Roberts, now chief justice, was the major voice in the opinion. He justified the decision by saying that, because voting discrimination was minimal, the law wasn’t necessary. “Coverage under the law,” Roberts stated, was “based on decades-old data and eradicated practices.” There was “no longer such a disparity,” he said.

Numerous Republicans praised the decision. South Carolina Senator Lindsay Graham insisted that “my state has made tremendous strides. I feel comfortable that we can have fair elections.” His colleague from Alabama, Jeff Sessions, called it, “good news, I think, for the South, in that [there was] not sufficient evidence to justify treating them disproportionately than, say, Philadelphia or Boston or Los Angeles or Chicago.”

Civil rights activists viewed the decision as a stunning blow to the right to vote. President Obama said he was “deeply disappointed” by the decision. Critics contended that the Court took the perverse step of saying that because the law worked, it was no longer needed. “Hubris,” wrote Justice Ruth Bader Ginsburg, “is a fit word for today’s demolition of the VRA.”

The Shelby decision unleashed a torrent of activities to restrict the right to vote. As soon as the decision was announced, Texas passed a new law that required a photo ID to register to vote, which over 600,000 eligible voters did not have. Many Texas counties with large black populations had no Department of Public Safety offices where one could obtain a state ID. The US District Court found that the measure created an “unconstitutional burden on the right to vote, has an impermissible discriminatory effect against Hispanics and African Americans, and was imposed with an unconstitutional discriminatory purpose.” But when the US Supreme Court issued a ruling that voting restrictions were permissible in October of the following year, Texas legislators revamped the law, simply giving people without photo ID the right to vote as long as they signed a legal document attesting to one of seven reasons why they didn’t have one, which many critics believed to be an act of intimidation meant to dissuade vulnerable voters.

The right to vote is the most basic element of a healthy democracy.

Many of the recent voting restrictions target low-income and historically marginalized populations. Most experts agree that the Republican Party benefits more from lower turnout than Democrats—an outgrowth of the fact that modern Republicans have been relying on an increasingly narrow coalition of voters. High turnout on Election Day often means that Democrats will do better. There is a long record of statements by Republicans who openly discuss the benefits accrued from suppressing the vote. President Trump recently warned of “levels of voting that, if you ever agreed to it, you’d never have a Republican elected in this country again.” One of President Trump’s campaign aides was recorded at a private meeting as saying, “Traditionally, it’s always been Republicans suppressing votes.”

Preventing individual people from voting is only one strategy for reducing voting power. Redistricting, the process whereby state governments draw House districts, enables states to craft unfair and inequitable maps. These districts, in turn, undercut the voting power of certain constituencies. While weak court supervision of the districting process has been most to blame, along with state processes that still generally give the most power to state legislatures to handle this matter, changes in computer technology have revolutionized the process. GIS technology has transformed the potential of what could be done, and the Republican Party has invested far more resources into this project than the Democratic Party.

The combination of voting restrictions and more precise gerrymandering leaves governments with lower participation at a time when our most urgent goal should be to expand the number of people who participate in the political process. Many activists thought that the main goal in the post–civil rights era would be boosting levels of voting participation, but we have moved in the opposite direction. As President Obama said in his farewell address: “When voting rates in America are some of the lowest among advanced democracies, we should be making it easier, not harder to vote.”

The right to vote is the most basic element of a healthy democracy. In 1965, the government took a huge step to guarantee this right. Since then, we have done immense damage in dismantling it. Whether we reverse this development in the coming years will have huge implications.

Carol Anderson, One Person, No Vote: How Voter Suppression is Destroying Our Democracy (Bloomsbury, 2018)

Ari Berman, Give Us the Ballot: The Modern Struggle for Voting Rights in America (Picador, 2016)

Alex Keyssar, The Right to Vote: The Contested History of Democracy in the United States (Basic Books, rev. ed., 2009)

Julian Zelizer, The Fierce Urgency of Now: Lyndon Johnson, Congress, and the Battle for the Great Society (Penguin Books, 2015)

Julian E. Zelizer is a professor of history and public affairs at Princeton University. He tweets @julianzelizer.