Editor’s Note: This is the first in a series of articles analyzing results from the 2008 Survey of Public History Professionals. This article will also appear in Public History News, the newsletter of the National Council on Public History.

Public history is one of the least understood areas of professional practice in history because the majority of public history jobs are outside of academia. The federal government collects an enormous amount of information about history teachers from school through university, which makes it relatively easy to assess the contours of their work. Unfortunately, however, we lack similar sources of data for most public history workplaces.

In order to get a better picture of public history as a profession, the National Council on Public History organized 10 historical organizations to survey their members about the demographics, training, employment conditions, and expectations of public history practitioners.1 The survey elicited almost 4,000 responses from the United States, Canada, and other English-speaking countries, providing a substantial base for assessing who is drawn to this area of employment, and what their concerns were, as we headed into the recent economic recession.

This survey replicated portions of a similar study from 1980, in an effort to facilitate some comparisons to the founding era of public history.2 The earlier study was conducted using similar methods (a mailing to the members of a number of historical organizations), but the new survey relied on e-mail and an online response form. The 1980 survey received 2,347 valid responses; providing the best, and in many ways only, snapshot of public history to date. Wherever possible, this analysis of the results of the new survey draws comparisons to that earlier study.

One of the most significant challenges for public history as a field is ambiguity about the definition of the term. That came through in the responses to the survey. Of the 3,856 people who responded to the survey, just 2,946 were willing to identify themselves as public historians—the remainder expressed some uncertainty about the term and whether it applied to them.

In fact, 364 of the respondents who appeared to be employed as public historians (with long-term or professional positions in history outside of academia) declined to accept the label. They offered a range of reasons for avoiding the term. Some found it too confining. As one observed, “A historian is a historian whether working in government, academia, or private industry.” Others said they were not specifically trained in public history, noting that, “I don’t have the qualifications for that title” or “I view it as a sharply-defined, credentialed occupation or profession.” Others felt their work was more precisely described in other ways, preferring to describe themselves as “preservationists,” “records managers,” or “archivists” at historical organizations. And many noted that they were not actually “producing,” “practicing,”or “using” history, and worked more as “administrators” or otherwise in support of others who do the historical work. A surprising number of these respondents emphasized the public character of public history, noting that they “don’t deal with the public domain,” “do not directly disseminate information to the public,” have “little or no public interaction,” or that they work for private institutions.

Conversely, 641 of the respondents who accepted the label were either employed at, or were students in, a college or university. In some cases, these were faculty who teach public history, in other cases they were archivists and librarians at those schools. Other full-time faculty who embraced the term were also employed as consultants or digital historians. Digital history, in fact, seems to provide a new avenue for academic historians to enter the realm of public history.

Setting aside some of these ambiguities, we took an expansive definition of public history practices, and included all those who either defined themselves as public historians or were employed in a historical activity outside of academia. This raised the level of respondents included in our tabulation of the survey to 3,492.

Public History in the Workplace 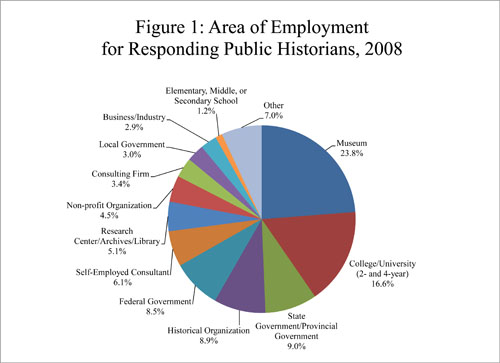 Government—at the federal, state, and local level—was a significant employer for the remaining public historians in the survey. State/provincial governments employed 9 percent of the respondents, the federal government another 8.5 percent, and local governments employed another 3 percent. Beyond those broad categories were a rich array of employers, including historical organizations (8.9 percent); research organizations, archives, and libraries (5.1 percent); nonprofit organizations (4.5 percent); and consulting firms (3.4 percent). Another 6.1 percent reported themselves as self-employed, while 7 percent indicated that they were either semiretired or that their employer did not fit into one of the other categories.

Due to variations in the labeling of particular work areas in the new study, we could not draw direct comparisons to the 1980 survey. But there was a notable increase in the number of academic historians adopting the public historian label in the new survey (up from less than 7 percent in the earlier survey). And in relative terms, there appeared to be a significant decrease in the proportion of public historians employed by federal, state, or local governments. With the rise of graduate programs in public history creating MAs moving into other areas of activity, and better dissemination of the concept of public history into the wider historical profession, the employment picture has become considerably more complex.

In general, however, public historians appeared to be doing fairly well economically. Their average income was modestly higher than that of other Americans last year, as 61.4 percent of the respondents employed full time earned more than $45,000, while 20.0 percent earned more than $75,000. Most of the respondents (71 percent) said they are satisfied or very satisfied in their jobs (though 47.0 percent felt they were “underpaid” in their jobs). In comparison, the Conference Board found that less than half of all American were satisfied with their jobs in 2007.

The Demographics of Public History

The increased proportion of women in the public history workforce since 1980 was quite striking, and in sharp contrast to the relatively modest change among historians in academia. Thirty years ago, as public history was first being established, women accounted for barely a third (36.0 percent) of the public historians responding to the survey. In the latest survey, women comprised two thirds of the respondents (65.5 percent), reflecting a profound transformation in the field (Figure 2). In comparison the proportion of women among historians in academia has grown from 12.7 percent in 1980 to just 30.4 percent in the most recent federal survey of department (conducted in 2003). 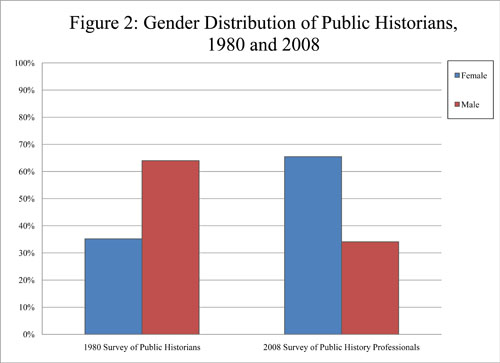 As the field has reached maturity as an area of employment, its practitioners have also become much older than they were 30 years ago. In the 1980 survey, 72.4 percent of the respondents were under the age of 46—reflecting in part the job crisis of the 1970s, but also the relative novelty of public history as a term of art. In the more recent survey, more than half of the respondents (55.2 percent) were 46 years of age or older.

More than three out of four of the respondents (76.5 percent) held an advanced degree. While this cannot be compared directly to the earlier survey, there was a significant decline in the proportion holding PhDs. Reflecting the job crisis of the 1970s, more than a third of the respondents to the 1980 survey (38.5 percent), held a PhD. In the more recent survey, 20.9 percent held the PhD, though almost 4.9 percent were ABD. Thanks to rapid growth in the number of MA-level public history programs over the past decade—currently approaching almost 120 in the U.S. alone—the proportion of public historians with master’s degrees has grown significantly in recent years.

More than half of the respondents in the 2008 survey had earned their highest academic degree in history (54.9 percent) or had received some other training in historical work (17.9 percent).

In our next report, we will break these numbers down a bit more—highlighting some of the differences in these results when we separate the responses by area of employment, gender, and age. We will also delve more deeply into some of the related questions in the survey, looking at more specific questions about the fit between the types of training public historians receive and their job prospects.

—John Dichtl is the executive director of the National Council on Public History.
—Robert Townsend is the AHA’s assistant director for research and publications.

1. The survey was distributed in fall 2008 to members of the American Association for State and Local History, American Association of Museums, American Historical Association, Canadian Historical Association, National Council on Public History, Oral History Association, Organization of American Historians, and Society for History in the Federal Government. Each society sent out a request to those they identified as public historians in their membership that asked them to fill out the survey “If you engage in public history work (including academic historians who do consulting or other public history work on the side).” Given variations in the definition of the term among the organizations, and overlapping memberships in the participating societies, it is not possible to treat the results as scientific in any way. Given the size and diversity of the respondents, however, we feel comfortable in treating the results as valid for assessing the larger contours of the public history profession as well as their issues and concerns.