Salaries for most historians at American colleges and universities lagged behind inflation last year, apparently affected by a general weakness in the economy and the consequent cuts in state budgets.

According to the annual salary survey conducted by the College and University Personnel Association-Human Resources (CUPA-HR), average salaries for historians at private colleges and universities rose 2.8 percent (for the second-year in a row), to $59,678. Average pay at public institutions rose an anemic 0.9 percent, to $58,641 (Table 1).1 With inflation running at 2.4 percent, these figures are quite dismal. 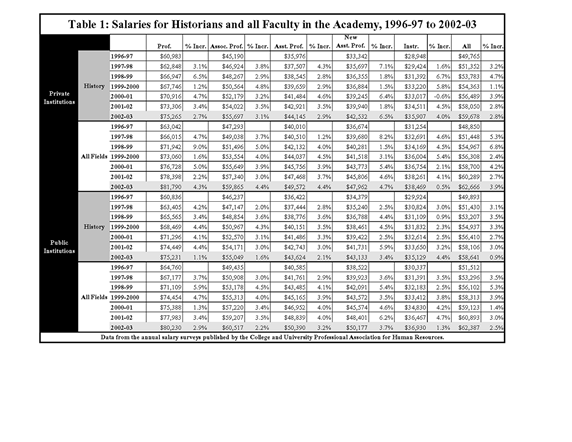 As we noted in our analysis last year, a decade of paying below-average wages to entry-level faculty members has been pulling down the average salaries of all historians, as the underpaid assistant professors of yesterday become the underpaid associate professors of today.3 With this year's increases, the gap between new assistant professors in history and their counterparts in all fields narrowed—though it still remains well above 10 percent.

Unfortunately, the CUPA-HR survey lacks key information on benefits-an essential part of any payment package these days. It does provide the only annual data on academic salaries by discipline, however, so we rely on it for detailed information on history faculty salaries at particular ranks and comparative data for other fields.

Traditionally, we also look to the CUPA-HR data for evidence about hiring trends and patterns, since they break out the number of new professors hired. Unfortunately the time series data on hiring appears somewhat unreliable, as they've switched to a new Department of Education system of classifying history faculty. This seems to have shifted a number of historians in cross-disciplinary departments into the general "social sciences" category.

Even with that change, the data still reinforces perceptions that a profound generational shift is taking place in history departments. Almost 5 percent of the departmental faculty in the field were newly hired assistant professors. As Figure 2 indicates, the proportion of senior faculty has fallen fairly steadily through the 1990s, as the large cohort hired in the late 1960s and early 1970s began to retire.

—Robert Townsend is assistant director for research and publications at the AHA..

1. CUPA-HR, National Faculty Salary Survey by Discipline and Rank in Four-Year Colleges and Universities (published annually for the academic years 1986–87 through 2002–03). This report consolidates separate reports for public and private institutions. Salary figures are based on a nine- or ten-month academic year, full-time faculty only. Fringe benefits and summer earnings are excluded. Copies can be obtained from CUPA-HR at 1233 20th St. NW, Ste. 301, Washington, DC 20036-1250, (202) 429-0311.