The Sarajevo Assassination That Didn’t Happen

The Ironic Relevance of a "Nonevent"

On the blustery afternoon of May 31, 1910, Habsburg emperor Franz Joseph I of Austria-Hungary peacefully paraded by horse-drawn carriage through the crowded streets of Bosnia’s capital city, Sarajevo. Barely a year earlier, the Bosnian annexation crisis had nearly sparked a European war. Although the Habsburg monarchy had administered Bosnia-Herzegovina since 1878, the Kingdom of Serbia coveted the adjacent, south Slavic region as its rightful irredenta, and Russia backed Belgrade’s national ambitions in the contested Balkans. Franz Joseph’s visit was thus a political affront and a perilous act. Yet no bombs were hurled at him by Bosnian or Serb nationalists, no bullets fired at his regal presence in the empire’s newly annexed province of Bosnia-Herzegovina. By all accounts, the 79-year-old emperor of Austria and king of Hungary so thoroughly enjoyed himself in his southernmost Slavic domains that, at one point, he turned to his host, Bosnian governor-general Marijan Varešanin, and exulted: “I assure you, this voyage has made me some 20 years younger!” 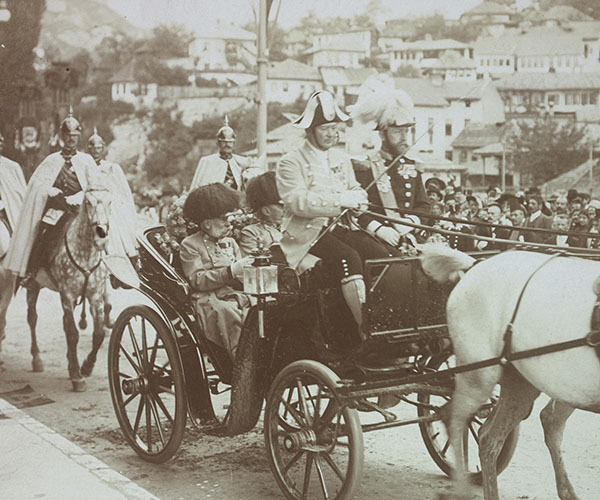 Emperor Franz Joseph processing through Sarajevo on May 31, 1910, the day of the Sarajevo assassination that didn’t happen.Courtesy Österreichische Nationalbibliothek, Vienna. Call no. Pk 1372, 8a

In fact, it nearly ended his life more than six years prematurely. Although security was far heavier than it would be when Franz Joseph’s nephew and successor, Archduke Franz Ferdinand, made his infinitely more infamous visit to Bosnia and procession through Sarajevo four years later, an armed nationalist named Bogdan Žerajić had twice gotten so close to the kaiser that, as he despairingly told a friend, “I could have practically touched him.” Yet out of some combination of fear and fecklessness, the Bosnian student never pulled the Browning pistol from his pocket. It was the Sarajevo assassination that didn’t happen. It was just one of several attempts on the kaiser’s life that failed to materialize or just failed altogether. It was, one might say, a nonevent.

The term nonevent can be understood in two ways: the obvious sense of something that simply did not happen and the more commonplace usage of an anticlimactic occurrence. In the latter case, like a highly anticipated diplomatic summit in which nothing serious gets resolved, a nonevent may be an actual event that’s less exciting, or “historic,” than expected. This can also work in reverse: our instinctive need for decisive moments in history to be appropriately “eventful” often affects how we remember them. Mussolini’s 1922 “march on Rome,” where Il Duce arrived by train to tranquilly receive the king’s consent to form a government, only became a dramatic “event” through later fascist propaganda. Many of history’s seemingly heroic episodes, like the Bolsheviks’ “storming” of the Winter Palace (or, more accurately, its wine cellar), have similar lineages. What makes Žerajić’s inescapably unheroic attempt on the kaiser’s life unusual for a nonevent is that it bridges both these definitions: it didn’t happen (i.e., he never drew his revolver, let alone drew attention to himself as a suspect assassin) and later memory made it more than it ever was. Indeed, Žerajić’s failure to fire would become a nonevent of such great pitch and moment that it inspired one of the signal events of the 20th century—the Sarajevo assassination.

As every European history textbook teaches, on June 28, 1914, a young Bosnian nationalist named Gavrilo Princip murdered Archduke Franz Ferdinand, heir to the throne of the Habsburg Empire, in Sarajevo. This event, this Sarajevo assassination as we know it, sparked a diplomatic crisis that only resolved itself in the First World War. Yet Princip probably never even would have had a chance if not for Žerajić’s inaction, his nonevent. Would “Emperor” Franz Ferdinand have risked going to Sarajevo in 1914 if his predecessor had been murdered there in 1910? If he did, security arrangements would have been extreme to say the least.

Our instinctive need for decisive moments in history to be appropriately “eventful” often affects how we remember them.

The problem with such hypotheticals is that they are simply endless, and in the end no more useful, or fruitful, than the already existing scholarly contemplations on what if Princip had misfired and Franz Ferdinand, like his uncle before him, had returned to Vienna alive. Everything that occurred between 1910 and 1914 would have been different with Franz Ferdinand on the throne, as he may have faced world war in 1910, or fostered an alliance with his “best friend,” Russia, or intervened against Serbia during the Balkan Wars in 1912–13. And why belabor Bogdan Žerajić’s specific nonevent when the archduke’s actual assassination barely came off?

After all, Franz Ferdinand had received numerous warnings against going to Bosnia in the first place. Assassination attempts were rife in the region, and Habsburg authorities had eventually found out about Žerajić’s bungled one. They passed their intelligence on to the archduke, though this nonevent by no means stood out from all the other intrigues the heir was briefed on regularly. Even on the eve of the Sarajevo procession, Franz Ferdinand was forcefully warned by Bosnian officials and men in his own entourage about the dangers of driving through the capital in an open air car on a Serb national holiday (Vidovdan, or St. Vitus Day). Yet it was less his well-known stubbornness than an honorable sense of imperial service that led him to go through with the Sarajevo program in the first place. “Fears and precautions paralyze your life,” the archduke once told a legal adviser, adding that he would rather put his trust in God than live “in a bell jar” worrying over the next nationalist assassin. Franz Ferdinand’s fatalism in ignoring the warnings was less insane than it seems to us today, since “the Sarajevo assassination that didn’t happen” is just one of a limitless litany of nonevents that assured the archduke to risk the one that did.

But even with the stage set, it was far from a sure thing. Who has not heard of the “wrong turn” taken by the heir’s car after he narrowly escaped a bomb attack that very morning; or wondered why the imperial procession had even continued after the near miss; or pondered how Princip’s first bullet happened to kill the one person the assassin wished to spare: Franz Ferdinand’s wife, Sophie Chotek, the duchess of Hohenberg? There certainly was enough drama on June 28, 1914, to safely ignore the nonevent on May 31, 1910.

God, clearly, was not on the successor’s side on June 28, 1914. Nevertheless, much happened that day that harked back to May 31, 1910, like the little-known fact that five of the seven so-called assassins backed out of the mission in the midst of the procession, and that its organizer tried to call off the intrigue even as he was distributing the weapons. So the question persists: Why dwell on “the Sarajevo assassination that didn’t happen,” besides the obvious attraction of historical symmetry? Truly, there seems little more reason to highlight Žerajić’s inaction in the Bosnian capital in 1910 than such nonevents as the archduke’s near death from tuberculosis in the 1890s; his witnessing of the failed attempt against Spanish king Alfonso XIII during the latter’s May 1906 wedding in Madrid (which left 23 people dead); and the 1913 arrest in Zagreb of one Luka-Lujo Aljionvić for plotting to kill the crown prince—“this rubbish who is restraining our national aspirations.” What there is more of, however, is “actual” history itself.

His final shot was precise, shattering his own skull and making him a martyr.

Žerajić, in short, was not finished, and this is the reason anyone knows about his futile attempt in the first place. Two weeks after losing his opportunity to eliminate the emperor, the 24-year-old fired five near misses at Governor-General Varešanin as he was leaving the newly inaugurated parliament in Sarajevo. His final shot was precise, shattering his own skull and making him a martyr figure for Bosnian freedom from Habsburg rule. The failed assassin of Emperor Franz Joseph had now done something for his country’s freedom that no Bosnian had dared before. The tributes, predictably, were fast and forthcoming—within days of Žerajić’s “heroic” historic event, young Bosnians were doffing their hats at the site of his suicide. The Serbian student review Zora (Dawn) reverently kept the would-be assassin’s name on its masthead. Although Sarajevo police furtively buried Žerajić in the vagrants’ cemetery, the site was readily discovered and regularly decorated by Bosnian youth. Free Serbia’s leading daily sang Žerajić’s praises wildly. Yet no one did more for Žerajić’s memory than his school friend and fervent Serb nationalist Vladimir Gaćinović. In February 1912, Gaćinović published the pamphlet Death of a Hero in a Belgrade-based Serbian nationalist journal. Scripted literally to “spark revolution in the souls and minds of young Serbs,” Death of a Hero bemoaned the absence of “grand, noble gestures” in Bosnia since Žerajić’s attempt. Where, he beseeched, were all those virtuous “men of action”? Who, he wondered, would take up the assassin-suicide’s selfless legacy?

Gavrilo Princip heeded the call. He had often made the pilgrimage to Žerajić’s grave site, on which he placed a handful of the “earth of free Serbia.” On the evening before murdering Franz Ferdinand, he headed there again to pay final tribute to his martyred hero. And in yet another confounding and contingent nonevent, such obvious warning signs were ignored. The Austro-Hungarian authorities who had informed Franz Ferdinand of Žerajić’s attempt on the emperor neglected to stake out the familiar pilgrimage site and detain Princip until the archduke had departed Bosnia. Consequently, on June 28, 1914, the little-known Sarajevo assassination that didn’t happen came full circle with the legendary one that did. “Glory to Žerajić!” proclaimed Princip at his trial. A nonevent in 1910 had suddenly ascended to a highly relevant, indeed world historical, event four years later. It was an irony and tragedy that would devastate humanity.

Paul Miller-Melamed is associate professor of history emeritus at McDaniel College and adjunct professor at the Catholic University of Lublin and Quinnipiac University. He is the author of Misfire: The Sarajevo Assassination and the Winding Road to World War I (Oxford Univ. Press, 2022).