“If Anybody Says Election to Me, I Want to Fight”

Between now and the inauguration of the next president, we may hear a lot of references to the election and compromise of 1876–77. Though that messy race is often cited as a distant precedent for a post-vote battle for electoral votes, no contest is more relevant or urgent today. 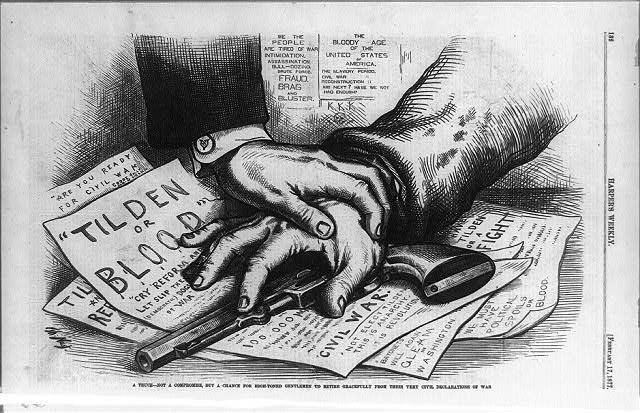 Cartoonist Thomas Nast depicted the Compromise of 1877 as a “truce, not a compromise.” Library of Congress Prints & Photographs Division, public domain

Fought in a climate of partisan violence and racial unrest, the 1876 race drew the highest voter turnout in US history (82 percent), and was ultimately resolved in a scramble for electoral votes. By the time it was over, five months after election day, some citizens were grumbling “if anybody says election to me, I want to fight,” while others feared that “we can never expect such a thing as an honest election again.” Even after it was settled (some say stolen), the disaster of 1876 cast a long shadow over popular faith in American democracy.

Everyone knew that 1876 would be a rough race. Nationwide, partisan loyalties were tightening, as Republicans and Democrats battled over Black voting rights, the memory of the Civil War, and an awful depression. Each party held massive midnight rallies, and some leaders on both sides urged voters to come to the polls armed. The few southern states still controlled by African American–friendly Republican governments—Florida, South Carolina, and Louisiana—were especially tense. In 1876, the legacy of one Civil War, and fears of another, were on the ballot.

And yet both parties chose dull candidates. Democrats went with Samuel Tilden, a cunning New York politician widely viewed as a reclusive oddball, while Republicans selected Rutherford B. Hayes, an uninspiring Ohio governor, “offensive to no one.” Both men ran as upright reformers, even while their parties used aggressive campaign tactics.

On election night, most believed that the Democrats had won. Even Hayes went to sleep that night convinced that Tilden was victorious and “the affair was over.”

But late that night, other Republicans were stirring. Dan Sickles, a former Civil War general and notorious Republican politician, spent the evening calculating votes in the party’s headquarters. Sickles realized that, although the Democrats had won the popular vote, 20 electoral votes needed to win the presidency remained undecided. South Carolina, Florida, Louisiana, and Oregon might still give their votes to Hayes.

The election of 1876 had disastrous long-term effects on American democracy.

As soon as doubt emerged about the electoral votes in question, both parties set out to steal victory. Politicos flooded into South Carolina, Florida, and Louisiana to influence the “returning boards” that would determine each states’ electoral votes. Backed by state officials, cash, and the US Army, Republicans began to disqualify Democratic votes. In Louisiana, the board dismissed nearly 10 percent of the state’s ballots, 85 percent of which were cast for Tilden. The official boards in these states certified their electoral votes for Hayes, while rival Democratic factions sent certificates to Congress giving Tilden the election.

The candidates took unexpected approaches to this crisis. Tilden hid out in his Manhattan mansion, forbade his supporters from holding rallies, and assembled a book arguing that the election should be decided by the (Democratic) House of Representatives. It was an earnest, intellectual response, entirely out of touch with the sleazy race. Hayes, though considered the duller man, proved to be surprisingly canny. He denounced fraud publicly, even as his operatives worked to disqualify Democratic votes. And he held friendly meetings with officials on both sides, allowing Democrats to back down from a violent fight for the presidency.

Meanwhile, the country winced. Just a decade after the Civil War, Union and Confederate veterans were yet again calling for partisan armies to assemble. Someone fired a bullet through the window of Hayes’s home, though the incident was hushed up. Only the presence of the respected general Ulysses S. Grant as president, and Americans’ shared memories of how devastating a political “contest of arms” could be, seemed to deter greater violence.

In early 1877, the fight moved to Washington. A Republican Senate and Democratic House bickered over which electoral certificates to count. Finally, they agreed to establish a 15-member Electoral Commission, with 7 Democrats, 7 Republicans, and 1 neutral member. That deciding vote would be Supreme Court Justice Joseph Bradley, nominally independent but in fact a longtime Republican.

Though many believe in a mythic Compromise of 1877, the truth points to something simpler.

With the outcome now leaning toward Hayes, the final issue seemed to be finding a way for congressional Democrats to back down. One meeting has taken on legendary significance. On February 26, a small bipartisan group met in Washington’s ornate Wormley Hotel. They discussed a potential deal, in which Democrats would accept Hayes as president, in exchange for support for a southern transcontinental railroad and the end of Reconstruction.

But no decisive agreement was reached. Though many believe in a mythic Compromise of 1877, in which a few sneaky politicos conspired against both the popular will and the fight for racial equality, the truth points to something simpler. The white majority—including almost all Democrats and many Republicans—voted to give up on Reconstruction by the mid-1870s.

Hayes now had the single vote edge in the Electoral Commission, which gave him a single vote edge in the Electoral College, and mattered more than Tilden’s 50.9 percent of the popular vote. Though Democrats were furious, all Tilden could do was shrug: “It is about what I expected,” while the Democratic New York Sun moaned, “These are days of humiliation, shame and mourning for every patriotic American.”

The chaos of 1876 took place in a vastly different nation, but a few points seem instructive in 2020. Tilden’s choice to stay in his bunker was a crucial mistake, while Hayes’s engagement across the aisle helped win the day. His ability to convince his opponents that they could tolerate four years of his presidency made it possible for them to concede his victory.

Republican success stemmed from the power of obscure local officials in the contested states, many of whom allowed their personal views to guide policy. After the 1876 election, a furious Democrat offered a warning to future Americans: “If you want to know who will be president by a future election do not inquire how the people of the states are going to vote.” The truth, he asserted, is murkier. “You need only to know what kind of scoundrels constitute the returning boards.”

Jon Grinspan, curator of political history at the Smithsonian’s National Museum of American History, is the author of the forthcoming The Age of Acrimony: How Americans Fought to Fix Their Democracy, 1865–1915.