What's in the New AHR?

Members should be receiving the October 2007 issue of the American Historical Review by the end of this month. The cover, pictured here, shows a cartoon from the year 1931, satirizing what some considered the utopian aspirations of the newly founded League of Nations, which is the subject of Susan Pedersen's review essay, "Back to the League of Nations." The issue includes another review essay and three articles along with six featured reviews and our usual extensive book review section. The October issue is the first to be published in conjunction with the University of Chicago Press. Here is what readers should expect when they open its pages.

The three articles move from early Islam to early modern England, and finally to both the United States and Africa in the 19th century. "'Do Prophets Come with a Sword?'" Conquest, Empire, and Historical Narrative in the Early Islamic World," by Thomas Sizgorich, examines the conflict between Imperial Rome and emergent Islam. His article offers us a rare look both at how Islam defined itself as an uncompromising, highly principled faith and how Christians misinterpreted this attitude for mere militancy. Along the way, Sizgorich offers an illuminating comparison between pre- and post-Islamic relationships with Imperial Rome and Persia as well, which serves to highlight the remarkable impact of Mohammed's revolution on Arab society.

Phil Withington, in "Public Discourse, Corporate Citizenship, and State Formation in Early Modern England," engages with Jurgen Habermas's influential thesis on the emergence of the public sphere during the Enlightenment, but does so from the perspective of sixteenth and seventeenth-century England. His central contention is that the corporate associations of traditional urban life actually fostered notions of publicness, thus suggesting greater lines of continuity than Habermas' narrative allows. Withington argues, indeed, that medieval corporatism, civic humanism, and the public sphere were more related than we might expect.

In "The Claims of Slaves and Ex-Slaves to Family and Property: A Transatlantic Comparison," Dylan C. Penningroth examines the property claims of slaves and ex-slaves in two regions, the U.S. South and the southern Gold Coast. His study attempts to bridge the gap in a discussion that is rarely joined, despite the fact that the histories of both regions have been shaped by debates over claims slaves and their descendants made to kinship and the product of their labor.

The two review essays offer readers up-to-date surveys of time-honored subjects. Robert M. Citino provides a view of recent writings on a field that has been neglected in the pages of the AHR. "Military Histories Old and New: A Reintroduction" invites us to recognize and sample the remarkable range of writings in this field, which has long expanded beyond "drum and trumpet" battle histories. Susan Pedersen too invites us look at the scholarship on one of the most important international organizations of the last century in "Back to the League of Nations." She argues that, despite its relatively short history, the League left a lasting legacy still felt today in the institutions and practices that govern international society.

Speaking of review essays: these are some of the most valued articles we publish. The editors often commission these sorts of pieces, but we are always on the look-out for scholars who would like to submit ideas or manuscripts which survey the recent literature in their fields. I would be happy to discuss proposals of this sort with anyone who wishes.

—Robert A. Schneider is the editor of the American Historical Review 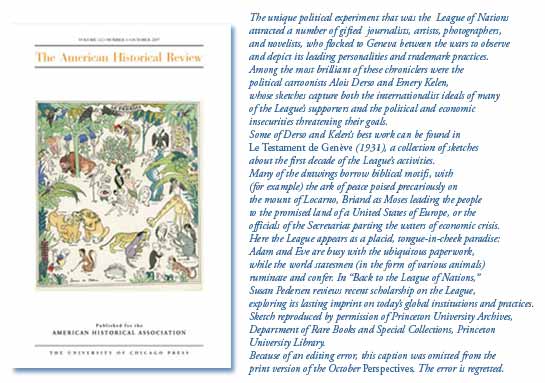