As the dustup last fall about the deletion of "psychohistory" from our membership taxonomy indicated, inclusion on the AHA's list of membership categories can be highly political—serving in many eyes as a mark of standing in the discipline.

Unfortunately, this sets up two competing problems. The taxonomy needs to be open to the emergence of new areas in the discipline, but it also needs to be functional in a variety of contexts—for members trying to identify themselves, historians trying to find a specialist for a meeting panel or publishers seeking an expert reviewer, or members of staff trying to offer a meaningful profile of the membership. With 297 different options in the taxonomy (and an open field for larger or smaller subjects of "current research"), many members complain that the taxonomy is already quite daunting and unwieldy.

The current list of categories was implemented in the spring of 1997, based on the taxonomy in the 1995 Guide to Historical Literature, which was organized into primary categories by geography and then subcategories by chronology. This allowed us to draw on categories selected by some of the best minds in the field, and also offered a list that was sensitive to local variations in periodization. I then culled a list of the primary thematic categories used in the book for a separate set of topical categories.

Through the years I can't recall anyone being completely satisfied with the choices, since scholarly research rarely fits within such boxes. For some, the categories seemed too large; for others, too confining. That was why we added the open-ended "current research" field to allow for more individualized expression and for narrower searching with a more particular interest. But for the purposes of taking regular—and broad—snapshots of the discipline as represented by the AHA's membership, the taxonomy served quite well. In broad terms, the pre-defined taxonomy remains preferable to the chaotic alternative, reflected in the faculty listings of the Directory of History Departments, Historical Organizations, and Historians, which took me months to crunch down into a coherent snapshot of the field specializations of faculty.1

Over the years we amended the taxonomy, first by consolidating some categories of the Ancient Near East and Central Asia (which were never selected by more than three members), and later by adding new thematic categories like media, immigration, and disability history. But after a decade of dealing with requests for new categories on an ad hoc basis—and more recently trying to delete two categories with only a small representation on a similarly ad hoc basis—it seemed time to establish a more coherent policy for adjusting the taxonomy over time. Given that, the AHA Council adopted the following formal policies for adding and deleting categories in the future, effective June 4, 2007:

Adding new categories requires a petition from 10 members in good standing requesting the addition of a particular category. Staff will review the membership status of the petitioners and the current selection of related topics in the open "Current Research" field, and submit a recommendation to Council. If a majority of members on Council agree, it will be added to the taxonomy.

Any category selected by less than five members two years in a row may be deleted from the taxonomy or consolidated into another topic. Staff will make such recommendations, and due notice will be given to all those selecting the category and in the pages of Perspectives. If after another year the category is still selected by less than five members, and subject to Council's final approval, that category will be deleted or consolidated.

Ideally, the policy to add new categories will help to keep the list open to new innovations in the discipline. Anyone interested in making such an application can submit it to my attention, Robert Townsend, or by mail to the AHA headquarters office. There is no form to fill out, so the application only needs to consist of a letter stating the requested change, a list of the members making the request, and supporting letters or e-mails from the 10 members.

The policy on deletion of categories is not intended to make a statement about the relative merits of a particular subject or area of inquiry, but is meant to set an objective standard that assures the taxonomy will allow us to assess the broad contours of the Association's membership. If a particular category cannot elicit a selection from at least 5 of the 14,000-plus members of the Association (who can select up to three categories that interest them), it seems reasonable to assume that the subject lacks a significant constituency in the AHA membership (not that it is any less significant as a field of study), or that however rich the field might be, there are so few specialists that the category needs to be broadened a bit.

Based on the most recent annual snapshot of the membership, the new policy stands to affect 20 categories, most of which cover very early periods of history or specific nations (Table 1). 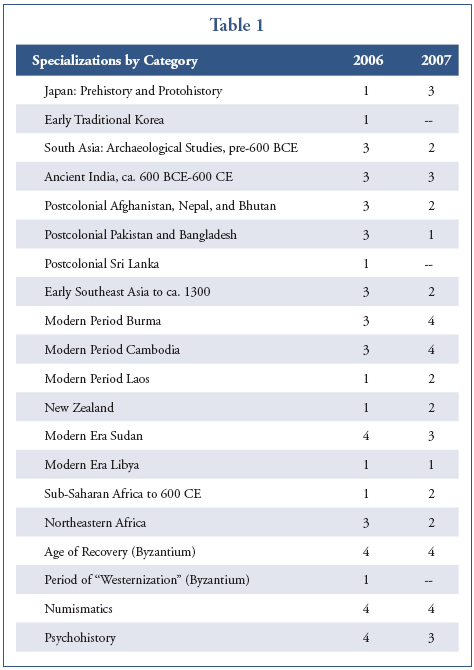 Most of these categories will not be deleted; they will simply be merged into another associated category. The early Japanese history category could be combined, for example, into a "Japan: Prehistory to Nara Period." And in the case of smaller states with only two or three selections, we would create a combined category—"Modern Burma, Cambodia, and Laos," for instance. Rest assured that we will consult with specialists in the field before making such adjustments.

Perhaps more worrisome is the recurrence of psychohistory on the chopping block, given the letters and comments we received the last time we proposed this cut. Curiously, we received more letters opposing the change (five in all) than we currently have members selecting the category (now down by one over the past year to three). At that level, I think the subject becomes particular enough that it would be more appropriate in the more individualized selections that go into the "Current Research" field.

It is in light of the foregoing that we invite members to vote—with their topic and category selections when enrolling or renewing—to determine whether any of the taxonomic categories in question are perpetuated, amalgamated, or deleted altogether.

—Robert Townsend, AHA's assistant director for research and publications, is responsible—among other things—for tabulating the AHA's taxonomies of the discipline and for taking the statistical snapshots of the membership.