A Unique Resource for Historians

Because of the technological developments of the past 40 years—radio, television, and the Internet, for example—scholars now have many more different resources to offer insights into recent history in richly textured ways that print does not proffer. Yet few archives have systematically captured and indexed these new sources. Over the past 35 years, Vanderbilt University has underwritten, at substantial cost, the development of a significant video archive of U.S and world events, known as the Vanderbilt Television News Archive (TVNA) and offered it freely to the world of scholarship.

The Vanderbilt Television News Archive began recording the nightly news broadcasts from ABC, CBS, and NBC just before the Republican National Convention in 1968. Ever since that time the archive has recorded the nightly news, U.S. presidential speeches and press conferences, and reports on major world events continuously. The archive now contains about 40,000 hours of video, and is the largest aggregate collection of U.S. news coverage in the world. Other large collections exist, but they are generally not accessible to the public or scholars. Each broadcast—including advertising—is indexed and abstracted at the individual news item level. Each news segment generally runs from 20 to 200 seconds. Each abstract includes a brief description of the news event, the key individuals involved, and other important information such as the reporter’s name. The abstract and index database now has more than 750,000 entries and is available on the Web. The web site receives an average of 8,000 hits per week. Scholars can search the database and identify the specific broadcasts they need in their research, and then order videotape loans of either complete broadcasts or compilations of segments.

The archive owes its origins to Paul C. Simpson, a successful Nashville insurance executive and Vanderbilt alumnus, who offered funding if the university would help him found the archive. Simpson had taken a trip to New York City where he found that the networks were not archiving their own news broadcasts and that this valuable source of information and cultural heritage was being lost. The archive has since also received grants from the Massey Foundation, the Justin and Valere Potter Foundation, Mobil Oil Corporation, the Freedom Forum, the Ford Foundation, and the National Science Foundation, as well as individual benefactors. 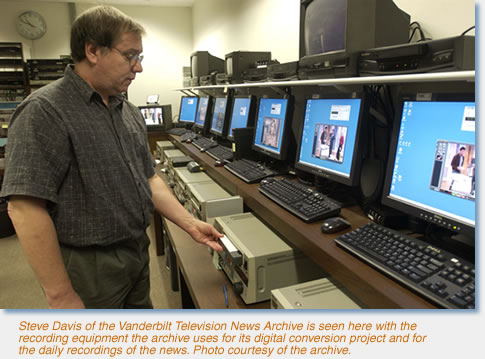 Today the archive faces a major technical challenge because the collection is recorded on ¾” tape using Sony U-Matic equipment that is no longer manufactured. Repair costs continue to rise and once the current equipment reaches the end of its useful life, the collection could become inaccessible. After extensive study, it was determined that the only effective way of preserving the collection while maintaining accessibility is to migrate the existing material on videotape to digital media and to record future broadcasts digitally.

The National Science Foundation and the National Endowment for the Humanities are funding the project to digitize the entire collection. From August 2003, daily broadcasts have been captured digitally instead of on videotape. A duplicate tape copy has been sent to the Library of Congress for many years and a converted digital MPEG-2 copy will be deposited with the Library of Congress for long-term preservation. Once the entire collection is digitized, it will be possible to provide immediate access to the collection via the Internet, bypassing the delays involved with videotape tape loans. Faculty will be able to create their own virtual compilations for both research and teaching. Students will have access to the richness and texture that video can bring over such print media as newspapers.

While technology will make it easier to access the archive, several legal hurdles also need to be overcome before access to the archive can become truly universal. Most of the networks whose broadcasts are preserved in the TVNA have not agreed to allow Vanderbilt provide online access to the archived material. The only exception currently is CNN, whose newscasts from 1995 to present are available to educational subscribers, through a special agreement made between Vanderbilt and CNN.

Indeed, in the early days of the archive, CBS had sued for copyright infringement, claiming that broadcasts could not be recorded without the permission of the networks. At the time of the lawsuit, Congress was in the process of revising the copyright law. Congress recognized the growing importance and influence of television media on American culture, thought, and politics, and felt that news broadcasts should have special protection under the copyright law, to allow the American people access to their own history. Senator Howard Baker of Tennessee introduced an amendment to the 1976 U.S. Copyright Act to give universities and archives the right to record news broadcasts off-air and to make a limited number of copies for research purposes. Following the enactment of the new law with this provision, CBS and Vanderbilt mutually withdrew from the lawsuit.

Because the changes in the copyright legislation facilitated recording news broadcasts and allowing access for research, Vanderbilt has been able to loan thousands of copies and compilations of news segments on videotape to researchers studying a wide range of topics from politics to medicine and the weather. The advent of the Internet and the consequent possibility of making digital copies and lending them online have, however, raised new legal problems that need to be resolved (see sidebar)

In the meantime, the TVNA continues to offer scholars access to this important medium. Few scholars think of the broadcast news medium as a resource for research since it is not tangible or accessible in the same way as, for instance, newspapers that are available in most research libraries. The TVNA challenges this traditional perception, and an increasing number of scholars have been using the resources of this archive to study and reflect upon the content of the medium that shapes American and world thought in such a powerful way.

Paul Gherman is the university librarian at Vanderbilt University.