What’s the Big Deal with the Anthropocene?

My father holds a PhD in atmospheric science, studies the mechanics of hurricanes, and believes that climate change is a hoax. In leaving my hometown behind, I’ve stepped out of a world where the rhythms of nature are fixed and safe, where a spring so warm that the Southern Hemisphere catches fire is nothing but a thaw come early, and into one where the vagaries of the weather represent monumental shifts in our existence—a world where the sunshine outside my window is a reflection of corporate greed, systemic environmental collapse, and human error on an unprecedented scale. 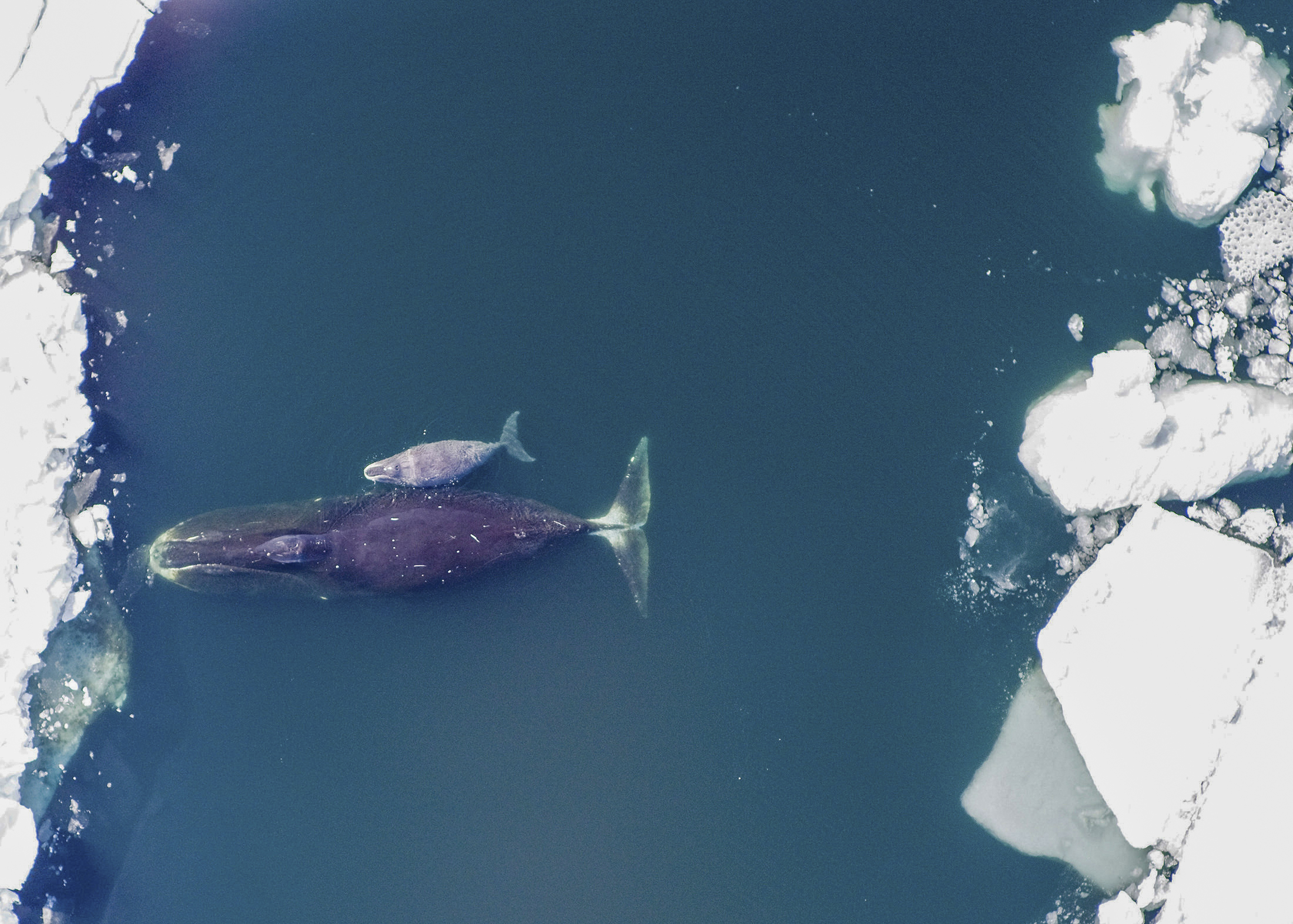 Bowhead whales like these, photographed in the Arctic Ocean, are just one of the fascinating topics related to the Anthropocene presented by historians at AHA20. GPA Photo Archive, US Dept. of State/Flickr/CC BY-NC 2.0

Although the implications of climate change and its relationship with humanity seem most directly linked to fields like atmospheric science, historians also have begun to investigate this phenomenon. At the 2020 AHA annual meeting, many scholars asked the pressing question: How do we, as historians, operate in such a world?

Scholars have given that world a name: the Anthropocene. The term, cropping up in panel titles and plenaries throughout the weekend, refers to a proposed geological epoch in which human action has become the defining force in Earth’s environments and ecosystems. It’s a slippery word. Scholars who agree, broadly, that we’re living in the Anthropocene disagree on when it began: The 16th century? The Industrial Revolution? Or was it the 1950s? It’s a term with many definitions and interpretations, and while the discourse around the Anthropocene tends to swirl around the foreboding reality of anthropogenic climate change, conversations at the 2020 AHA annual meeting revealed that historians may be uniquely poised to extract new forms of knowledge from the Anthropocene.

John R. McNeill (Georgetown Univ.), the 2019 AHA president, believes that, by combining new techniques like paleogenomics with traditional archival research, we can do just that. In his presidential address, McNeill wondered whether we might be approaching “peak document”—a moment, as he put it, when written documents will produce diminishing returns, becoming less useful than nontextual sources such as genes, proteins, and LiDAR (light detection and ranging) imagery. Consider, he suggested, the death registers of an outbreak of plague in 17th-century Milan. Facing such archival sources armed only with the tools of textual research, a historian might learn a great deal about the names and numbers of the epidemic—but by analyzing proteins clinging to the pages of the same documents, one might gain the ability to analyze the diets of the clerks who took down the names. Teeth, McNeill reminded us, are a daily record of growth, nutrition, and stress in humans in the same way that the rings in a tree’s trunk constitute a legible biography of the plant itself. Using teeth as historical sources gives us access to a new version of childhood health history—one that might extend far beyond the written texts available on children’s health.

By learning to use the tools necessary for understanding such sources, and by engaging in research in multidisciplinary teams, McNeill suggested, we may lengthen our sense of history, redistribute the power and privilege that often make some written texts more accessible than others, and even restructure the academic job market, encouraging a move away from specialization in period and region and toward a system that values expertise in tools and collaboration.

Historians may be uniquely poised to extract new forms of knowledge from the Anthropocene.

Throughout AHA20, I saw historians echoing McNeill’s address and modeling exactly such archival reinvention, turning away from letters and journals to sources as varied as cows, satellites, winds, and rivers. In a session chaired by Kate Brown (Massachusetts Institute of Technology), “Forensic History: New Material Sources and Methods for Historians of the Anthropocene,” Timothy James LeCain (Montana State Univ.), Dagomar Degroot (Georgetown Univ.), Bathsheba Demuth (Brown Univ.), and Megan Black (London School of Economics) explored the histories of the cattle industry in the American West, global climate change, whaling, and mineral-driven imperialism through nontextual sources. Going into the session, I was unsure what to expect—from a traditional archival standpoint, it was hard for me to imagine how, as LeCain promised, a cow could “Create Many Histories.”

The result: surprising, rich re-visions of histories I’d thought I knew. LeCain called on the work of animal behavior expert Temple Grandin to tell the story of the cattle drive from the perspective not of the cowboy, but the cow. He demonstrated that mapping out the longhorn’s unique plane of vision explains why cowboys rode slightly behind and to the side of cattle as they moved—a response to the complex social nature of the cow. In this light, the cattle drive becomes not simply a monumental human undertaking in which cattle were mindless cargo, but an instance of “extended culture” in the symbiotic cooperation of two social animals.

Bathsheba Demuth, similarly, reimagined the whaling industry of New England by first describing the culture of bowhead whales, a species of baleen whale living in the waters of Beringia, between Russia and Alaska. Bowheads, which live at least two centuries, are extremely social creatures. By repeatedly diving and resurfacing, Demuth explained, the whales “do work that makes the places where they live more alive,” moving nutrients upward from deeper waters. Indigenous cultures in the surrounding region understand the whales as animals living in a country of their own—a country invaded in the 1850s by sailors from New England who viewed whales as little more than sources of precious oil. Eventually, through repeated interactions with whaling boats, bowheads seemed to learn that the tall Yankee ships didn’t want to approach the edges of pack ice, and so they hid there, “refusing,” as Demuth put it, “to die for capitalism.” Textual sources from the time period, which called the whales “wild,” “shy,” and even “canny,” reflect a new awareness on the part of human actors of the conscious role whales played in forcing the industry to abandon the Bering Strait as a site for whaling.

Hearing history that is interpreted from the perspective of nonhuman actors carries not only new insights, but also a certain flavor of certainty often absent in textual analysis. Brown summed up this fundamental value of “forensic history” in the plenary on the Anthropocene: “People lie. Pine trees don’t.”

Addressing the Anthropocene in our histories may mean more than picking new sources to work with.

But addressing the Anthropocene in our histories may mean more than picking new sources to work with. During the plenary, anthropologist Zoe Todd (Carleton Univ.) spoke of the many names given to our current ecological state that speak to the unevenness of responsibility for humanity’s impact on Earth—“capitalocene” and “White-supremacy-cene” stand out. We have arrived at our current historical position, Todd argued, through the actions of specific actors—and to undo their work, we must dismantle white supremacy and reconfigure our relationship to land, water, and Earth. Todd urged historians to decolonize historical thinking and to turn to indigenous, non-Western cosmologies for guidance, replacing the global logic of “extraction, expansion, domination, and death” with reciprocity, kinship, and relationality.

What does this look like in practice? I’m not sure, but some scholars are pointing the way to this work. In the “Air, Wind, and Sky: Histories of an Omnipresent and Invisible Force” session, Alyssa Kreikemeier (Boston Univ.), Elaine LaFay (Univ. of Pennsylvania), Ela Miljkovic (Univ. of Houston), and Laura Uribarri (Univ. of Texas at El Paso) traced the impacts of settler colonialism on the meteorology of the American West and Mexico. Kreikemeier, in her account of the colonization of northern New Mexico by “lungers” seeking a fresh-air cure for tuberculosis, argued that New Mexico’s air itself literally led to its acceptance as a US state. LaFay, likewise, investigated settlers’ treatment of Texas’s “norther” winds as political instruments used to gauge how viable land might be for white settlement. Ryan Emanuel (North Carolina State Univ.), presenting during the “Alternate Currents: New Approaches to the Environmental History of Water” session, described the reciprocal relationship between the Lumbee Tribe of which he is a member and the Lumbee River, which runs through his home state of North Carolina. Examining shifting ecological conditions and increasing flooding, Emanuel asked: Can the values of indigenous ancestors help us to think about artificial drainage? His history of the Lumbee River is not a static narrative about the past, but a resource of knowledge for action and activism in the present.

A theme of any conversation about the Anthropocene is controversy and disagreement: What is it, what should we call it, and how, having named it, should we move forward? Whatever the Anthropocene is or may become, our challenge as historians is to inhabit this epoch as both actors and researchers. As historians living in the Anthropocene, we are responsible for untangling the complexities of a past that, as McNeill reminded us in his presidential address, may really extend beyond what we have been accustomed to call history and into what is called—wrongly in McNeill’s view—prehistory. But we must also grapple with the weight that our actions hold in the present as the raw materials of a future history we are engaged in writing, along with the full ecological scope of the planet. If there is one lesson from explorations of the Anthropocene at AHA20, it is that this is a historical task none of us can afford to ignore.

R.E. Fulton is a historian of medicine, gender, and crime holding a master’s in American history from the University of Rochester. Their current research focuses on gendered uses of the insanity defense in 19th-century New York state. They tweet @rebfulton.