Through Storm, Flood, and Fire

Firearms from the Civil War, covered in mud, sat on the banks of the Mississippi Gulf Coast in the days after Hurricane Katrina. After Hurricane Sandy, costumes, props, and programs from the famed Martha Graham Dance Company floated in their storm surge–inundated storage room. Swirls of mold covered the walls of a Puerto Rican library from floor to ceiling in the weeks after Hurricane Maria. 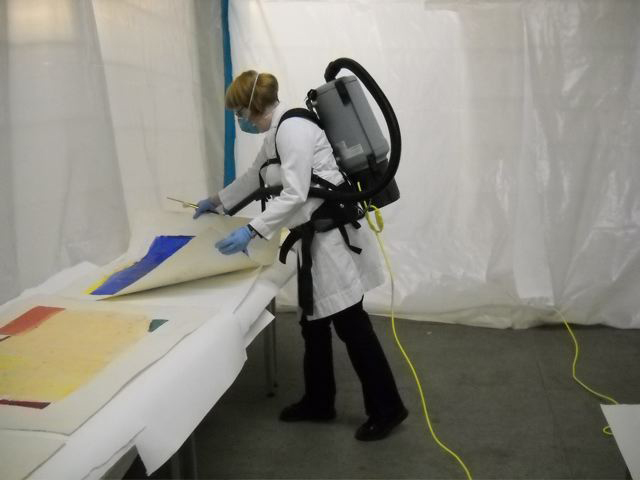 In 2012 after Hurricane Sandy, a specialist working in New York’s Cultural Recovery Center vacuumed dried mold from works on paper. Courtesy Foundation for Advancement in Conservation

We see them with increased frequency and ferocity: the large natural disasters that decimate communities. The sense of loss that accompanies such disasters is acute, a feeling that is heightened when our collective cultural memory is imperiled as well. We rely on objects to learn from past generations and to carry a record of our lives into the future. Books, letters, records, photographs, film, works of art—whether located in our nation’s great museums or cedar chests at home, tangible cultural heritage is found in objects. And those objects are at risk.

Some of these risks are due to inherent vice: organic materials are meant to decay. Collections staff at museums, libraries, and archives work to create controlled environments to delay these processes. But sometimes forces conspire to disrupt those environments. Hurricane winds can knock out a museum’s power and HVAC systems for days. Wildfires can pump soot and smoke into an archive’s ventilation systems. Exposure to these types of conditions can lead to a host of subsequent problems. Wet objects may warp and distort; dyes may bleed. If the environment remains damp for too long, mold will bloom and begin feasting on organic materials. Soot is highly abrasive; it will chafe the surface of exposed artifacts. And sometimes, good intentions in addressing damage can lead to further harm.

What is at stake? It’s not simply a question of property. The unique story contained in each object—and its potential for future research—can be lost as well. As a changing climate brings more frequent storms with increasingly severe consequences, it is incumbent on this generation to start planning now for how to best protect tangible heritage for the future.

Stewards of collections, including librarians, archivists, registrars, collections managers, and conservators, need to learn how to address damage to the objects in their care. Research in this area has moved forward in leaps and bounds over the past several decades, shaped in part by the response to the Florence Flood of 1966. This single event damaged thousands of items of immense historic and artistic value in the heart of Florence, Italy. Over the past half century, the field of disaster response for cultural resources has honed its methods and developed new techniques, and worked to disseminate this information broadly.

Increased knowledge of materials on the molecular level has helped to drive decision making in responding to damage presented by water, soot, chemicals, or other by-products of disaster. For example, while mold is a major threat, some wet items can be safely frozen in order to create a hostile environment for mold growth. This can be an effective way to buy time for large collections that have sustained damage. Once frozen, some objects can even be safely dried using vacuum freeze-drying, a process that uses sublimation to move the frozen water directly into its gaseous state.

As a changing climate brings more frequent storms with increasingly severe consequences, it is incumbent on this generation to plan for how to best protect tangible heritage for the future.

Many cultural institutions now own a copy of the Emergency Response and Salvage Wheel, a go-to guide for how to effectively handle different types of damaged materials. From textiles to photographs to electronic records, this resource provides high-level information about what to do—and not to do—when dealing with affected objects.

Likewise, as the field of emergency management has professionalized in the United States, the forms and structures of response have taken shape. The National Incident Management System (NIMS) provides a framework for coordinating response and recovery activities. Operating within NIMS are the National Heritage Responders, a group able to provide free assistance to cultural institutions in need. National Heritage Responders offer advice on the phone and send small teams to help direct salvage operations at museums, libraries, and archives.

While establishing resources and processes for disaster response is essential, those activities don’t address the full scope of the disaster cycle. Preparedness and mitigation are critical investments requiring foresight, innovation, and cooperation. Emergency managers and first responders are keenly aware of the risks in their jurisdiction, and they train extensively on how to respond. Collecting institutions that develop working relationships with these professionals benefit from their diligent focus on preparedness. Programs like the Alliance for Response initiative aim to bring together local cultural heritage professionals with emergency personnel to collaborate on planning, training, and risk mitigation.

These communities form cooperative disaster networks that work together to achieve collective goals. For example, a network in Seattle has a mutual-aid agreement in place for individuals and groups to support each other during the “big one.” In Salt Lake City, a network has collaborated with state agencies to write an annex to the state’s emergency response plan that includes cultural resources. And a network in Minneapolis–St. Paul has developed a guide to working with first responders.

Cooperating on the local level is essential, as each region faces its own challenges in terms of natural hazards. Climate change and its associated extreme weather patterns are changing those hazards as well. California institutions face increased risk of wildfires brought on by drought and extreme heat, while hurricanes gather more power over warmer water, threatening those in their paths with stronger storms. Local networks must be nimble in responding to these changing risk landscapes.

Recognizing and responding to the threats posed by climate change will be a major challenge for all those working to protect cultural heritage. But those who work in this sector must also recognize the power of heritage in supporting disaster-risk reduction through the communities they serve. Highlighting this connection is The Climate Heritage Network, a voluntary, mutual-support network committed to aiding communities in tackling climate change and achieving the ambitions of the Paris Agreement. The network was conceived in 2018 and launched in 2019; parties may sign onto a “Memorandum of Understanding” to formally participate.

We are already dealing with loss and destruction, and there is more to come.

The Climate Heritage Network recognizes that we are already dealing with loss and destruction—and that there is more to come. There are simply some things that cannot be saved. Stewards of immovable heritage (such as buildings and archaeological sites) confronted this reality early on, with slowly rising seas claiming coastal heritage sites. More inevitable loss means that we need to start making decisions about our risk-management strategies. What considerations should be made for those communities that will be displaced by climate change? How will their heritage be protected when they are forced to move from their homes?

A connection with cultural heritage—with place, with history—offers tools for navigating the societal stressors associated with climate change. Looking to ways that humans managed the environment in the past may present options for a more sustainable future. Likewise, preservation of historic buildings represents a significant path to reduced carbon emissions from the built environment, since “the greenest building is the one that is already built.”1 Facing the challenges of the future means protecting, valuing, and understanding our past.

Collecting institutions can play a significant role in positioning cultural heritage as a central vector in the fight against climate change. The field has made major strides in being more resilient as it’s worked toward building capacity for disaster response, recovery, mitigation, and planning. However, there is still much work to be done.

In February 2019, the Institute of Museum and Library Services published a report titled “Protecting America’s Collections: Results from the Heritage Health Information Survey.” The data indicate that among the approximately 30,000 collecting institutions in the US, only 42 percent have a disaster plan. What’s more, only 24 percent of all institutions have a plan and staff trained to carry it out. A plan may be helpful, but if it goes unread and unpracticed by staff, then it will be minimally effective during an event. Between those 30,000 institutions, there are approximately 13.2 billion objects held in the public trust. That means there are billions of objects directly at risk due to a lack of planning and training.

Current hazard projections will shift, and shift rapidly, during the coming decades. We must face the reality that not everything can be saved. But the steps we take now will have major implications for the future of our tangible heritage. We must endeavor to educate leaders in the fight against climate change about the knowledge that can be gleaned from past generations. And we owe it to future generations of researchers to protect those items in our care, so that we may pass along a material heritage from which to learn.

Jessica Unger was formerly the Emergency Programs Coordinator at the Foundation for Advancement in Conservation; she now serves as the Community Outreach and Grants Manager at the DC Preservation League. She tweets @jessunger.