Medicare for All in the Age of Coronavirus

A History of US Health Care Debates

In the best of times, trying to make sense of the US health care system is a difficult undertaking. Now that the coronavirus has upended American lives, the terms of political discussion about health care are likely to change again in ways that are hard to anticipate. To pass the time as we huddle in our homes during the COVID-19 pandemic, a history of the US health care system might help with understanding the terms of the debate and what is at stake. 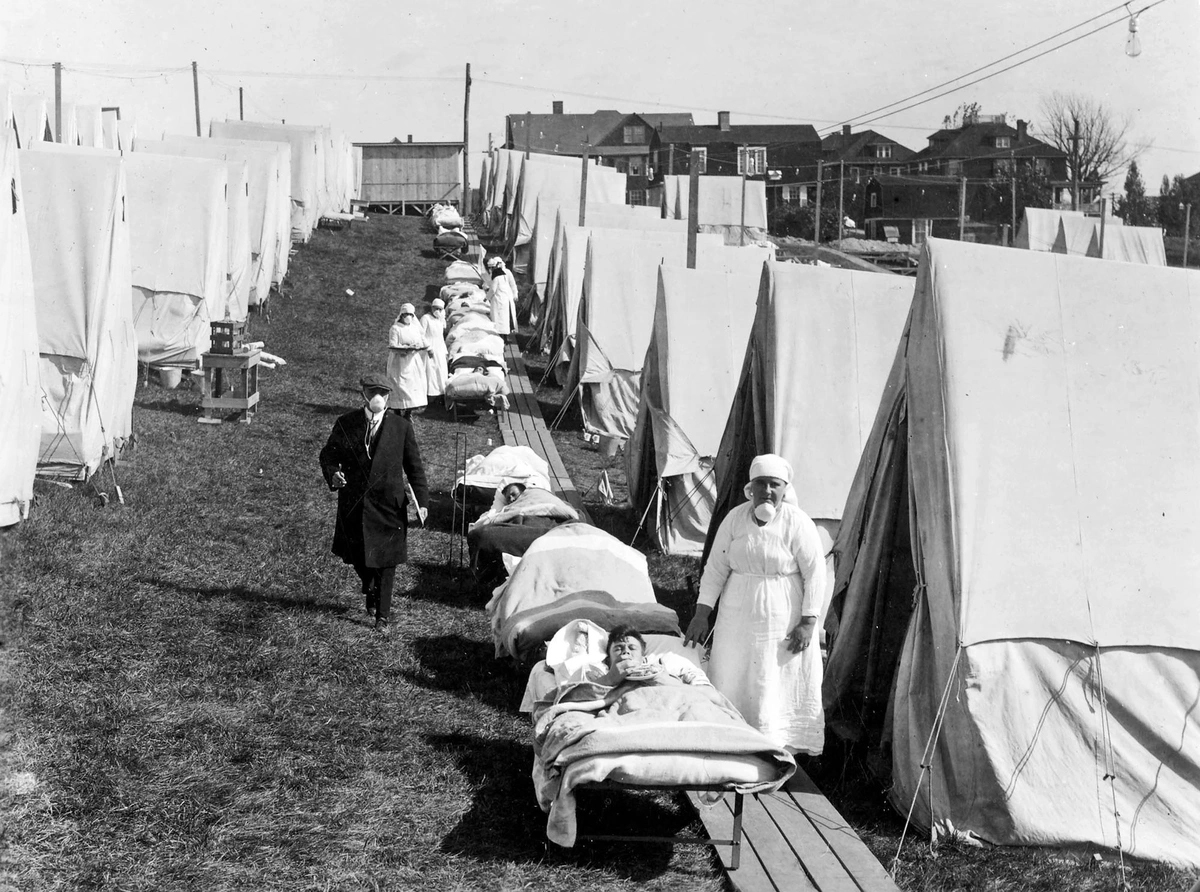 This field hospital was constructed in Brookline, Massachusetts, during the 1918 influenza epidemic. The coronavirus pandemic has led to similar emergency measures, such as the field hospital erected in New York City’s Central Park in April. And it’s unclear what lasting impact this crisis will have on the American health care system. National Archives and Records Administration, 165-WW-269B-019

Prior to this crisis, health care reform had already emerged as a leading issue in the 2020 election campaign, especially in the Democratic Party. Democratic candidates have proposed various reform agendas, among which Medicare for All (MFA) got the most attention. For reasons that are not entirely clear, repackaging the concept of a single-payer health care program—an idea that has been around for at least 50 years—has succeeded in making the idea more politically viable. The phrase Medicare for All was first adopted by Massachusetts Senator Edward Kennedy in 2007; it was popularized by presidential candidate Bernie Sanders in 2016 and endorsed by a growing number of Democrats in Congress during the 2018 election. MFA proposes expanding Medicare, the federal program established in 1965 to provide health coverage for people 65 and older, to cover all Americans. Candidates who support MFA remain vague about how this would happen, what it would cost, and who would pay for it. At the same time, advocates argue that MFA will fix the well-documented dysfunctionality of the US health care system, including its uneven coverage, high costs, grave inefficiencies, and overall fragmentation of care.

The US has long been an outlier among nations in its approach to health care. It is the only country with a so-called advanced economy that does not provide universal coverage for essential health services. Fellow member nations of the Organization for Economic Co-operation and Development took many different paths to arrive at the goal of universal coverage from the 1950s to 1970s. Some chose a mix of public and private options, while others adopted single-payer systems, but all were seeking change after the devastation of World War II. Many political leaders in other countries came to see universal coverage as a desirable goal that government involvement was necessary to achieve.

In contrast, postwar US political leaders rejected the idea of universal coverage and decided against direct government involvement in the provision of health care. Instead, Congress provided generous indirect support, funding medical research through the National Institutes of Health and subsidizing hospital construction through the Hill-Burton Act, passed in 1946. Changes in the Food and Drug Administration gave pharmaceutical companies added incentives to develop new prescription drugs. In theory, the expansion of private, employer-based medical insurance plans would make it possible for Americans to afford the better (and more expensive) care these indirect investments provided. This private insurance system linked coverage to being a valued worker; while it was initially a perk of white-collar occupations, unions secured the same for many blue-collar workers in the 1940s and 1950s. In line with its Cold War superpower status, the US promoted this “free enterprise” approach to health care as far superior to the “socialized” medicine being adopted in other countries.

The US has long been an outlier among nations in its approach to health care.

But by 1960, the problems inherent in this privatized, employer-based system had already become apparent. Once employees retired, they lost their coverage, just when they needed it most. Workers in nonunionized fields or small businesses were not offered insurance, and their low wages made it hard to afford a doctor’s care without it. Meanwhile, this system allowed doctors and hospitals to set their own fees, inflating the cost of medical care and further widening the gap between those with and without insurance.

These issues figured prominently in the presidential election of 1960. Democratic candidate John F. Kennedy won a narrow victory over Republican candidate Richard Nixon, in part because he promised to pass Medicare, a program he said was desperately needed in “every city and town, every hospital and clinic, every neighborhood and rest home in America—wherever our older citizens live out their lives in want and despair under the shadow of illness.” Kennedy’s assassination helped his successor, Lyndon Johnson, overcome fierce opposition from the medical profession and the GOP, and make good on that promise. In 1965, Congress created Medicare and Medicaid to extend publicly financed coverage to the elderly and low-income families, respectively. But Medicare was set up on the same fee-for-service principles as private insurance, helping accelerate the inflation of health care costs. The problems already apparent by 1960 just worsened.

Thus began a long, frustrating search for health care reform that saw various plans proposed and defeated, from the single-payer system proposed by Edward Kennedy and other Democrats in the 1970s to the hybrid system proposed by the Clinton administration in the 1990s. Finally, in 2010, Congress passed the Affordable Care Act, commonly known as Obamacare, to create a new mechanism for expanding coverage: an insurance exchange administered by the federal government where people could buy private insurance covering essential health services. Due to Republican opposition, the legislation did not include a public option that would have let people choose a government-sponsored plan. Ever since, Republicans have been working to overturn the Affordable Care Act. Their alternatives—having patients shop by price and making them more responsible for paying for the care they want—have not proven popular among voters.

Democrats are trying to take advantage of that weakness in the 2020 elections. During the 2020 campaign, candidates Bernie Sanders and Elizabeth Warren went on record supporting MFA. Other candidates offered narrower fixes aimed at making the current system work better: those who are satisfied with their employer-based coverage may keep it; those without coverage or who want to change theirs can opt into the Medicare program or some other kind of public option. Instead of MFA, this is “Medicare for all who choose it.” Not surprisingly, this debate became highly polarized. While Democratic candidates supported the principle of universal coverage, they disagreed over how to achieve those goals, while Republicans attempted to turn MFA into a liability that would help Trump’s reelection.

Both MFA and its alternates inspired fierce resistance from within the health care industry. Since the 1970s, the US insurance system has fueled a huge expansion of the health care sector. Any measures that threaten to change the economic incentives created by that complex system have been and will continue to be fiercely resisted. The health insurance industry, the American Hospital Association, and the American Medical Association all oppose MFA. In their view, Medicare currently does not pay physicians and hospitals enough, so it would be a mistake to expand it.

COVID-19 will no doubt fundamentally change the terms of the MFA debate, as the crisis exposes the US health care system’s weaknesses.

That was the state of the health care debate before the coronavirus pandemic arrived in the US. The ensuing chaos will no doubt fundamentally change the terms of that debate, as the COVID-19 crisis exposes the US health care system’s weaknesses. Without universal access to good-quality prevention and treatment, many Americans face the pandemic already suffering from chronic conditions, such as diabetes, heart disease, and obesity, that heighten their vulnerability to the virus. Federal funding for public health functions, including tracking infectious diseases, is half of what it was before the 2008–09 recession. As a result, the US faces a two-fold meltdown in medical and public health services. Hospitals are being inundated with very sick patients with too few ventilators to treat them with and not enough personal protective equipment for the workers who care for them. With the pandemic making it impossible for hospitals to schedule the medical procedures that pay most of its bills, they are going deeply into debt; some are laying off health care workers even as the crisis escalates. Meanwhile, due to historic inequalities in health care access and quality, the pandemic is wreaking havoc on poorer Americans who lack income, food, and housing security, as well as health insurance.

In these ways, the coronavirus calls attention to the enduring problems of the American health care system. The pandemic threatens to reveal the terrible cost we pay for failing to provide universal coverage for all Americans. In the eyes of proponents of universal coverage, the current system reinforces many dangerous assumptions: that people do and should control not only the course of their own individual health—demonstrably untrue—but should control other people’s as well; that cost barriers are necessary to keep people from abusing health care by using “too much of it;” that health care works best when delivered on a for-profit basis regulated to benefit those who make the profits; and that a highly privatized health care sector can respond nimbly to new public health threats. These assumptions have led to the systematic undervaluing and underfunding of the public health resources that leave us unprepared for the global pandemics that are likely to become a routine part of 21st-century life.

Nancy Tomes is Distinguished Professor of History at Stony Brook University. She is the author of The Gospel of Germs: Men, Women and the Microbe in American Life (1998) and Remaking the American Patient: How Madison Avenue and Modern Medicine Turned Patients into Consumers (2016), winner of the 2017 Bancroft Prize.