This year marks the bicentennial of a momentous event in the history of the revolutionary Atlantic. In 1820, after two decades of postrevolutionary turmoil and civil war, the nascent Republic of Haiti unified under autocratic president Jean-Pierre Boyer. Although such unified sovereignty provided the “Black republic” with a nominal stability, it hardly ended the island’s enduring poverty and political corruption. Nevertheless, 1820 marked Haiti’s launch into the Atlantic world as a sovereign nation. The June issue of the AHR offers both a Forum and a Roundtable on the important, if once neglected, place of Haitian history in the Atlantic world. 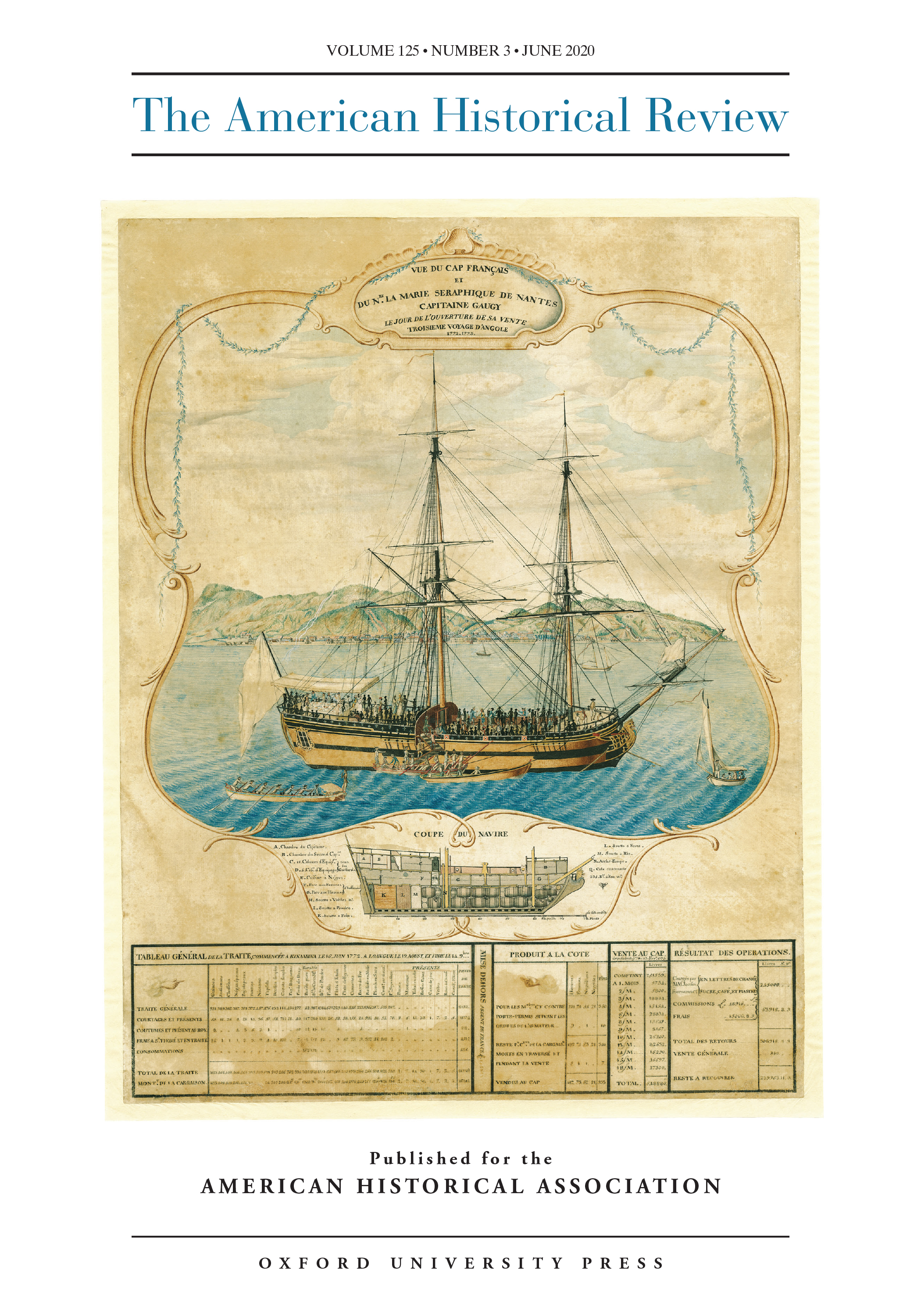 The slave ship Marie-Séraphique at harbor in Haiti in 1773 (watercolor; artist unknown, Musée d’histoire de Nantes). This image, from the peak years of the French slave trade with Saint-Domingue (today’s Haiti), illustrates the primary currency of the slave trade, which lay in textiles and metal products. Such products would remain telltale signs of slaving when the transatlantic trade became illegal. In “Repairing Damage: The Slave Ship Marcelin and the Haiti Trade in the Age of Abolition,” Mary D. Lewis uses an 1818 receipt full of suspicious products sold in Haiti to reconstruct the voyage of a French brigantine, demonstrating how it used a stopover in free-soil Haiti as a cover for illicit slave trading in Cuba. Situating the Marcelin within a “second slave trade,” Lewis shows how illicit slave trading was most “successful” when it left the fewest archival traces. Her article is part of an AHR Forum titled “Haiti in the Post-Revolutionary Atlantic World,” which also includes essays by Julia Gaffield and Manuel Barcia and is accompanied by a review roundtable on Julius S. Scott’s The Common Wind: Afro-American Currents in the Age of the Haitian Revolution.

The Forum, “Haiti in the Post-Revolutionary Atlantic World,” includes two articles followed by a comment. In “Repairing Damage: The Slave Ship Marcelin and the Haiti Trade in the Age of Abolition,” Mary D. Lewis (Harvard Univ.) observes that between 1814 and 1831, French slave traders trafficked approximately 200,000 enslaved individuals across the Atlantic basin. A small, but still surprising, number of their slave ships stopped in Haiti on their return voyage after selling captives elsewhere in the Americas. Using the case of the brigantine the Marcelin as her prime example, Lewis demonstrates how legitimate commodity trading with Haiti could serve as a cover for illicit French slaving in the abolitionist era. She situates the Marcelin within a hidden “second slave trade,” one that emerged as European countries abolished the transatlantic trade on paper but continued it in practice, leaving very limited historical traces. Lewis reconstructs the contours of the French participation in this proscribed commerce from fragmentary archival evidence, while arguing that, ultimately, the archive itself can do violence to the realities of the 19th-century slave trade.

If Lewis traffics in Haiti’s hidden history of commercial exchange and networks, Julia Gaffield (Georgia State Univ.) considers the new republic’s emerging role on the diplomatic stage. Her article, “The Racialization of International Law after the Haitian Revolution: The Holy See and National Sovereignty,” explores how the Haitian state shaped international definitions of sovereignty and national legitimacy after its Declaration of Independence in 1804. Haiti’s 19th century was not a period of isolation and decline, she reminds us; instead, its first six decades were globally connected as the country’s leaders challenged their postcolonial inequality with diplomacy and state formation, forcing the Atlantic powers to redefine the boundaries of international relations. Gaffield emphasizes Haiti’s decades-long negotiations with the Catholic Church, illuminating the racialization of the global hierarchy within the 19th-century “family of nations.” Even as the Haitian Republic cultivated internal policies and practices that rejected predominant racist assumptions, these same discriminatory ideologies became increasingly explicit in an international legal system in which Haiti sought to demonstrate its sovereign status.

Finally, in “From Revolution to Recognition: Haiti’s Place in the Post-1804 Atlantic World,” Manuel Barcia (Univ. of Leeds) offers a trenchant response to Lewis’s and Gaffield’s contributions. Appreciating both articles’ place within a wider body of scholarship that looks at the Age of Revolution across oceans and nation-state borders, Barcia emphasizes their ability to reveal how postrevolutionary Haiti’s international position influenced the strategic imperatives of Atlantic powers, often exposing their underlying racist ideologies and deceitful policies. By engaging with issues that go beyond Haiti and its transformative revolution, Barcia notes, both Gaffield and Lewis offer persuasive arguments pertaining to crucial aspects of international trade, diplomacy, and politics of the first half of the 19th century.

The June issue of the AHR offers both a Forum and a Roundtable on the important place of Haitian history in the Atlantic world.

If a single work inaugurated the scholarship of the Age of Revolutions upon which Lewis, Gaffield, and Barcia build, it was Julius S. Scott’s 1987 dissertation, “A Breathing of the Common Wind: The Sea, Politics, and Communication in the Era of the Haitian Revolution.” Scott’s influential and long-simmering unpublished work on the plebian information networks instrumental to and unleashed by Haiti’s revolutionary moment, now published as The Common Wind: Afro-American Currents in the Age of the Haitian Revolution (Verso Books), has already been the subject of numerous workshops, conference panels, blog posts, and published roundtables. The AHR asked six scholars of Caribbean, Haitian, and Atlantic history—Brandon Byrd (Vanderbilt Univ.), Laurent Dubois (Duke Univ.), Natasha Lightfoot (Columbia Univ.), Matthew Smith (Univ. College London), Cristina Soriano (Villanova Univ.), and Sasha Turner (Johns Hopkins Univ.)—to offer brief thoughts on the impact of Scott’s work on the study of Haiti and the ongoing ripple effects of its revolution.

The rich material on Haitian history does not exhaust the June issue’s contents. Caroline Dodds Pennock (Univ. of Sheffield) provides a different perspective on Atlantic history in her article, “Aztecs Abroad? Uncovering the Early Indigenous Atlantic.” Indigenous people are often seen as static recipients of transatlantic encounter, Pennock points out, influencing the Atlantic world only in their parochial interactions with Europeans. In fact, she shows, thousands of Native Americans crossed the ocean during the 16th century as diplomats, entertainers, traders, travelers, and, sadly most often, as enslaved people. As a result, Pennock argues, Indigenous people created a worldview framed in transatlantic terms. Focusing on purposeful travelers of “Aztec” (Central Mexican) origin, she uses the distinctive context of the 1500s to rethink the meaning of the “Atlantic world,” positing Native people as global actors who created and transformed social, economic, political, and intellectual networks. Pennock discovers a truly “Indigenous Atlantic,” allowing us to reimagine the history of the ocean itself as a place of Indigenous activity, imagination, and power.

New global imaginaries are also the subject of the issue’s final article, Hilary Kaell’s (Concordia Univ.) “Renamed: The Living, the Dead, and the Global in Nineteenth-Century U.S. Christianity.” Over the 19th century, thousands of North Americans and Europeans paid to sponsor and rename foreign children in mission stations across the world. Piecing together extant records, Kaell discovered that US Protestants commonly renamed foreign children after their own beloved dead, offering insight into how Americans who never traveled abroad still cultivated global subjectivities. By nurturing relations with enchanted presences, such as God, angels, and the dead, these otherwise disenchanted believers cultivated a sense of themselves as subjects who were Christian, American, and globally engaged. For grieving families, renaming appeared to impress their dead kin’s “qualities” onto foreign children, creating what they viewed as unique opportunities to collaborate with the dead and reconstitute ruptured domestic relations. Focusing on middle-class Protestants in the US, a group often assumed to be the most disenchanted of 19th-century moderns, this article calls for more attention to the “otherworldly” in histories of global relations and imaginaries. Indeed, the affinities between Haitian loa, the ghost-like intermediaries who link the world of the living with the world of the spirits, and the renaming rituals described by Kaell are quite striking.