A new survey of academic salaries shows history slipping further behind other fields—though it is still doing better than many other humanities and social science fields.

Perhaps most troubling, the survey by the College and University Personnel Association for Human Resources (CUPA-HR),1 shows average salaries for historians at private colleges and universities actually falling a bit after posting significant improvements last year (Figure 1). The average salaries for historians at private institutions fell from $62,488 to $61,702 in the fall of 2004. 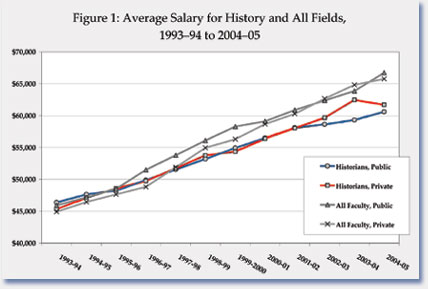 This decline could be seen at every rank and level, except among newly hired or newly promoted assistant professors. For these new faculty members, average salaries rose 3.1 percent, from $43,248 to $44,585 (Table 1). Among full professors, the decrease was modest, but a decrease nonetheless. Their average salaries fell almost $500, from $76,925 in the fall of 2003 to $76,478 this past fall. The decrease will, in fact, be even greater if the change in the consumer price index (approximately 2.66 percent between 2003 and 2004, according to the Bureau of Labor Statistics) is factored into the salary figures.2 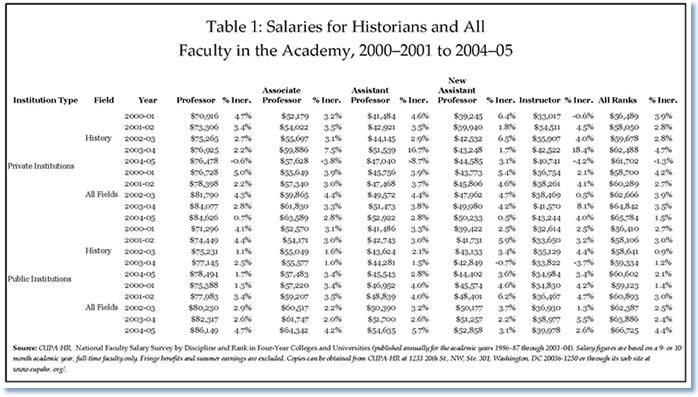 The news was better for history faculty at public colleges and universities, where average salaries for history faculty rose 2.1 percent, from $59,334 to $60,602. This relatively modest shift masks stronger gains for faculty at all ranks except that of full professor. Once again, new assistant professors enjoyed the largest improvements—gaining a 3.6 percent increase, from $42,849 to $44,402. In contrast, among full professors the average salaries rose just 1.7 percent, from $77,145 to $78,494.

At almost all ranks and at both types of institutions, history continues to fall further behind the larger trend in salaries for the academy. The average salary for historians in four-year colleges and universities was $61,006 while among faculty in all disciplines the average is $66,407.

Ten years ago history enjoyed higher than average salaries, but this was largely based on a statistical anomaly—at that time history had an unusually large proportion of senior faculty at the full and associate professor level (Figure 2), which served to drive up the average for the discipline. As we have noted in our job market surveys of the past few years, there is a profound generational shift now taking place in history departments, so the demographics of the departments have become much younger and the average salaries commensurately lower. 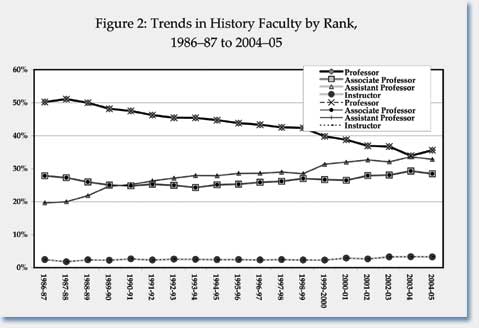 Regrettably that is not the only reason for the change, however, as we have seen the averages diminish at each rank as well.

Salaries for faculty at each rank are currently about 10 percent lower than the average for all fields. That still places history ahead of humanities fields like English and vocational fields like library science and journalism, but history has been losing ground steadily to other social science fields like anthropology, economics, and political science.

Once again, there were important differences between public and private institutions on this measure (Figure 3). While the proportion of public colleges and universities reporting new hires increased from 40.9 percent to 45.5 percent this year, the proportion of private schools that were hiring remained essentially flat at 30.5 percent. 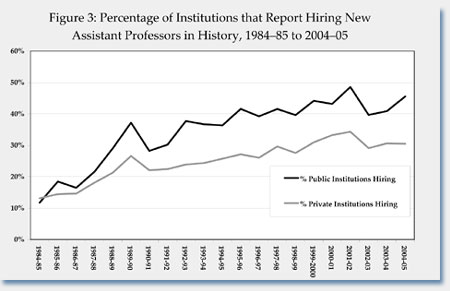 When we look at the number of faculty actually hired, the difference becomes starker. The number of junior faculty hired by the private departments fell from 102 to 92, even as the number increased from 188 to 212 at public institutions.

In fact, history departments at public institutions were singled out by the authors of the CUPA-HR report out for the unusually large number of new assistant professors. History departments had the fourth-highest proportion of new assistant professors at public colleges and universities. These new hires constituted 5.8 percent of the department faculty at the responding public institutions.

1. CUPA-HR, National Faculty Salary Survey by Discipline and Rank in Four-Year Colleges and Universities (published annually for the academic years 1986–87 through 2003–04). Salary figures are based on a nine- or ten-month academic year, full-time faculty only. Fringe benefits and summer earnings are excluded. Copies can be obtained from CUPA—HR at 1233 20th St. NW, Ste. 301, Washington, DC 20036-1250 or through its web site at www.cupahr.org/.

2. The figure of 2.66 is derived from the Consumer Price Index calculator at the Bureau of Labor Statistics CPI web page, www.bls.gov/cpi.