Putting the Dark Ages to Rest

In February 2019, Matthew Gabriele visited the British Library for the exhibition Anglo-Saxon Kingdoms: Art, Word, War. Like many exhibitions, this one ended at the gift shop, and as Gabriele perused the books on display, he realized that the general histories of the Middle Ages included there were quite old and “trafficked in ideas of the myth of the Dark Ages, which did not match what I had just seen.” Still standing in the gift shop, he pulled out his phone and texted fellow historian David M. Perry: “We should write a general history of the Middle Ages.” Perry replied immediately with “And we should call it The Bright Ages.” 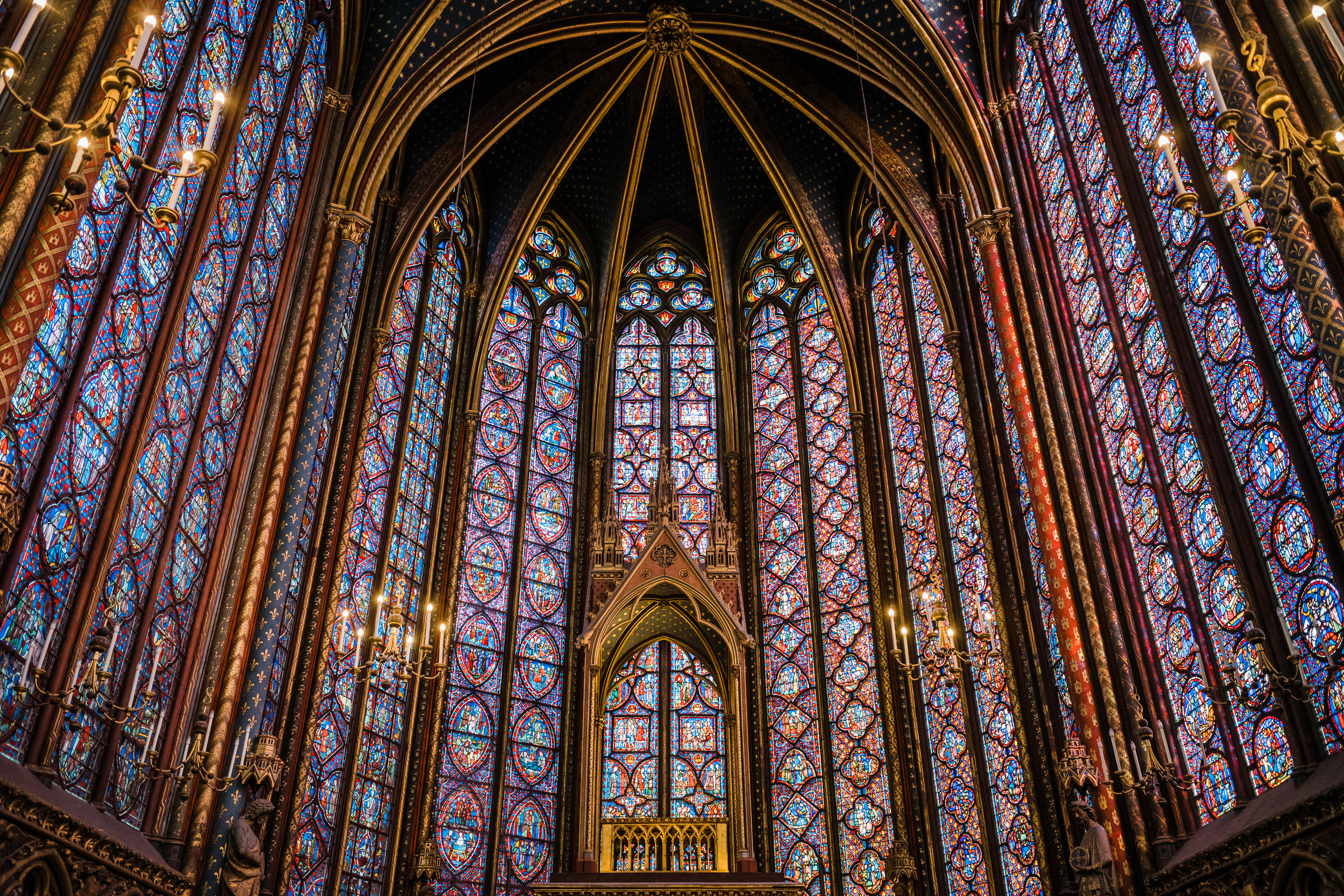 Suffused with light and color, The Bright Ages highlights the beauty found in the medieval period. Oldmanisold/Wikimedia Commons/CC BY-SA 4.0

For both Gabriele and Perry, one of the most pervasive myths surrounding the medieval world is that it was a time of decline and darkness. At the British Library, Gabriele, professor and chair of religion and culture at Virginia Tech, was “struck by how vibrant and brilliant and colorful the whole exhibition was.” Illuminated manuscripts, gold artifacts, and other objects popped with color. It had not been dark at all.

Perry, a history academic adviser at the University of Minnesota Twin Cities and a freelance journalist, also had been thinking about this topic for a while. “Professional medievalists encounter a complex, nuanced world with beauty and horror and everything that humans can do,” he told Perspectives. “And then there’s this narrative of the Dark Ages that has been with us for 600 years and is almost inescapable, and still permeates the public consciousness of what the European Middle Ages were.” Comparing the Middle Ages he and Gabriele know and the version the public encounters, especially in pop culture, Perry says, “They’re just not the same place.” So emerged the idea for their new book, The Bright Ages: A New History of Medieval Europe (Harper, 2021).

The book starts, as many on the topic do, with the fall of Rome in the fifth century. They then skip across nearly 1,000 years of history, illuminating moments, people, and places that have been poorly served by a Dark Ages framing. They spotlight key events, from scientific advancements to the founding of universities—all of which occurred in a society based on religious faith—before ending with Dante in the 14th century. It’s a complicated world, full of human actors who were as flawed and complex as we are today. As they write, “The Bright Ages contain the beauty and light of stained glass in the high ceilings of the cathedral, the blood and sweat of the people who built them, the golden relics of the Church, the acts of charity and devotion by people of deep faith, but also the wars fought over ideas of the sacred, the scorched flesh of the heretics burned in the name of intolerance and fear.” Gabriele and Perry thus argue for an expansive vision of medieval Europe, one that is integrated with, not isolated from, a broader world and includes those who speak different languages or practice different religions.

This expansive world is one they have discussed together over the years. Like with many such academic friendships, they can’t pinpoint when they first met, though it was likely at a conference. They first wrote together in January 2019 for the Washington Post, and they had been looking for a way to collaborate again. Gabriele previously had gotten the attention of a book agent from other public writing in the Post. When he and Perry came up with The Bright Ages, the agent signed them immediately and helped sell the project to Harper.

In the book’s early development, they relied on experiences with the public they encounter most often: students. Over Gabriele’s and Perry’s years of teaching, their students have asked smart, important questions about the medieval period and its events, peoples, and cultures. These questions helped guide them in mapping out the book. And while many would be daunted by trying to cover nearly a millennium of history in a single volume, this was no new task for these authors. Many medievalists, including Gabriele, are the only one in their department or their institution, and so they must become generalists who cover the entire period. The general framing of the Middle Ages has always included a specific beginning and ending—roughly between the fall of Rome and the Renaissance—and Gabriele and Perry wanted to rethink the meaning of those time constraints. As Gabriele said to Perspectives, they wanted to get readers “to think about, from the perspective of medieval Europeans themselves: What did the fall of Rome really mean? And we decided, well, what if Rome didn’t really fall? And at the end, what does it mean to say there’s a Renaissance? That’s saying something about the Middle Ages as a whole.”

Student questions helped guide them in mapping out the book.

Originally, they had planned to get together every few months to write and revise. In fall 2019, after Gabriele gave a talk at the University of Minnesota, he and Perry went to a cabin together. They fished and talked and wrote together. But like so many projects in the last two years, the pandemic had an inevitable effect. Those visits went out the window, and they transitioned to drafting the book together in Google Docs. Gabriele said, “We embraced it, but we were forced to embrace it. But in some ways, it benefitted us, because it forced us to trust each other.”

Important to both Gabriele and Perry was that the book be written in a single voice. They split up drafting chapters based on their own interests and expertise. The first chapter Gabriele wrote, for example, was based on a lecture on the 11th century that he loves giving in his medieval world course. But these chapters did not remain their own solitary project. Gabriele told Perspectives, “We sent them to each other and said, ‘Make it better.’ I don’t really know which sentences are mine.” Perry said, “In that early stage, we weren’t tracking changes—we were writing words on top of words. That was deliberate, to try to accomplish a place where the words became ours.” This was by no means an easy time. The pair were juggling jobs, providing childcare while schools were closed, and supporting their partners and families through the crisis. Writing often took place late at night. But they persevered and kept trying to tell these stories.

The Bright Ages and its authors are not the first to reject the Dark Ages framing. Both Gabriele and Perry emphasized in our interview that they are “building upon decades of scholarship by people much smarter than we.” As Perry said, “For every period, there is always a popular vs. scholarly disconnect. But for the Middle Ages it is particularly powerful. The myth of the Dark Ages has an impact—including professional scholars of other periods who teach in ways that take for granted this myth.” “What we’re trying to get across with this reframing,” Gabriele said, “is that the European Middle Ages are knowable. And they’re human. This is not a blank space in human history—a place without sources, where people plodded through life waiting for the Renaissance to occur and modernity to begin.” In contrast, the people of those centuries “lived full rich lives. Within those lives, they did terrible things, and they did amazing things, and they made choices. And those choices have impacted the way that European history has turned out since then.”

“The European Middle Ages are knowable. And they’re human.”

The Bright Ages not only rejects the Dark Ages as a metaphor; the physical book is suffused with light and color. The authors have woven this theme throughout the book, using sunlight shining through stained glass, gold crosses, and colorful mosaics (like the one depicted on the cover). This emphasis on objects and architecture allowed them to focus on people’s lived experiences. “A lot of the pieces we talk about are from elite culture, but they give you a sense of how you experienced the medieval world with all your senses—it looked like something, it smelled like something, it tasted like something,” Gabriele said. As Perry added, “People had stuff, and they touched it, and they had ideas and thought about it and they wrote it down, and they traded it, and it meant something. People walked by a façade, they looked up, they saw it. Everyone could look up and see it and have some sort of interaction with the stories being told there. That’s part of the medieval experience.”

As medievalists know, their period of study comes up all the time in modern life—from Game of Thrones to the January 6 Capitol insurrection. Gabriele and Perry’s first collaboration was on such issues. “We’ve done a lot of journalism around the issue of modern invocations of the Middle Ages to serve contemporary political means,” Perry said. But “what we can’t do in our journalism is tell this bigger story.” One thing Gabriele wants is for their readers to think twice about using medieval as a careless descriptor about something that seems primitive or backward that is actually entirely modern. “When that happens, it’s a no-thought, get-out-of-jail-free card. It’s a way of distancing us today from whatever we’re talking about, so we don’t have to take responsibility for it. ‘That’s a medieval practice.’ No, those things are happening now. Simply taking that adjective out of people’s repertoire will influence the way that we think about our position in the world and our responsibility to one another.” Perry added, “We always want to remember how history is being used and to engage that.”

By publishing with a trade press, Gabriele and Perry are hopeful that they will reach the public where they are. Perry said, “I want people walking through the airport who like history to see our book in paperback and pull it off the shelf.” Gabriele added that’s why they included such an extensive “further reading” list at the end of the volume—so it’s a starting place for readers to learn more. Perry said, “We want fellow historians to see this book as a way to open doors and invite people in.” “Will we succeed?” Gabriele asked. “I hope so.”