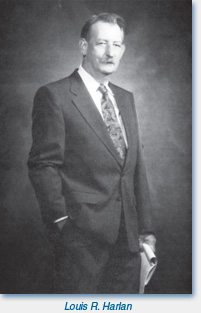 Louis R. Harlan, distinguished university professor emeritus at the University of Maryland, College Park, died on January 23, 2010, at the age of 87 in Lexington, Virginia, where he and his wife Sadie lived in retirement since 2003. He ranks among the leading historians of his generation. His body of work on Booker T. Washington and his earlier study, Separate and Unequal: Public School Campaigns and Racism in the Southern Seaboard States, 1901–1915 (1958), leave an enduring legacy.

Harlan was born in West Point, Mississippi, in 1922 and was reared in Decatur, Georgia, a small street-car suburb six miles from the heart of Atlanta. The house he grew up in was made of granite from nearby Stone Mountain, the site of the rebirth of the Ku Klux Klan in 1915 and sculptor Gutzon Borglum’s unfinished paean to the Lost Cause. Harlan wrote eloquently about his encounter with Stone Mountain in his essay in William Leuchtenburg (ed.), American Places: Encounters with History (2000).

The Harlan family was Southern, but mostly unionist in the Civil War. He had two relatives, other than his immediate family, of whom he was particularly proud. One was James Harlan, the president of Iowa Wesleyan College, who later served in the U.S. Senate and briefly was Lincoln’s Secretary of the Interior. The story about James Harlan that Louis liked to tell was that in his penchant for efficiency, James Harlan fired dozens of clerks at the Department of Interior, including Walt Whitman for writing poetry at his desk. H.L. Mencken later wrote about this incident, “one day in 1865 brought together the greatest poet America had produced and the world’s damndest ass.” Louis Harlan took pride also his ancestor John Marshall Harlan of Kentucky, a Union army officer and later associate justice of the Supreme Court, for his dissent that championed the rights guaranteed to blacks by the 13th, 14th, and 15th Amendments in the 1883 Civil Rights Cases. John Marshall Harlan also dissented in Plessy v. Ferguson in 1896. Louis spoke to a large gathering of the extended Harlan family a few years ago and reminded them, “John Marshall Harlan had been a slaveowner, as his father was before him. History is full of such contradictions.”

Harlan’s college education was interrupted by World War II. He enlisted in the Navy in 1942 but managed to complete a BA degree at Emory University before entering midshipman school in 1943. He completed a master’s degree in 1948 from Vanderbilt University and did his doctoral work at Johns Hopkins University in 1955, where he was a student of C. Vann Woodward. At a Hopkins seminar Harlan met John Hope Franklin. Harlan was so impressed with him that it had a major impact on his decision to devote his career to studying race relations and African American history. Harlan spent the 1950s as an instructor, rising to the rank of associate professor at East Texas State College, and then taught six years at the University of Cincinnati beginning in 1959. In 1965 he made his final academic move to the University of Maryland, where he spent the next 27 years, earning the rank of University Distinguished Professor, one of only six faculty members in all departments of the university with this rank at the time of his retirement in 1992.

It was at Maryland that Louis Harlan launched his career as the leading scholar of the black educator and race leader Booker T. Washington. The voluminous collection of Washington’s papers, housed at the Library of Congress, just a half-hour drive from the College Park campus, would become the place where Harlan would spend the next two decades mining this mother lode of African American history. Harlan’s earlier study Separate and Unequal covered the same period that saw Booker T. Washington rise to power as the leading spokesman for black Americans. But it was Harlan’s good friend, the late August Meier, who first saw the potential of the Booker T. Washington Papers and used them to great advantage in his seminal study, Negro Thought in America 1880–1915: Racial Ideologies in the Age of Booker T. Washington (1963). Washington’s papers revealed a far more complex personality than Washington’s well-honed public persona that played down the harsh realities of Jim Crow America. Behind the scenes, Washington emerged as a shrewd political operative, fighting Jim Crow as well as his critics both black and white.

Harlan planned to write a biography of Washington. But when he first began his work, he did not know it would consume the bulk of his career, resulting in a two-volume biography, numerous scholarly articles, and a 14-volume edition of Washington’s writings and selected correspondence. The mid-1960s, of course, was the height of the civil rights movement and the beginning of a major sea change in the attention and prominence given to African American history. Yet at this same time, Booker T. Washington’s image in the pantheon of significant black figures in American history was badly waning. Washington, the leader who accommodated to Jim Crow strictures in the late 19th and early 20th century, hardly seemed the stuff of heroes to a new generation of activists, both black and white, who were agitating for an end to Jim Crow and demonstrating for full civil rights. Louis Harlan participated in the civil rights movement, marching in Montgomery with Martin Luther King Jr. and later marching and protesting against the Vietnam War, all the while studying the life of the conservative Republican Booker T. Washington, who had rejected protest as a means to achieve social and political equality.

In 1983, when Harlan received the Bancroft Prize for volume two of his biography of Washington, Booker T. Washington: The Wizard of Tuskegee, 1901–1915, shortly before he was awarded the 1984 Pulitzer Prize for biography for the same volume, he spoke at Columbia University and said, “If my remarks had a title, it would probably be, ‘why 20 years with the wrong man?’ Why biography in a period when the whole trend of historical research is toward the demographic, the computerized, the anonymous? The only answer I have found to stop that line of questioning is, ‘Why a duck?’” “Instead of the grand sweep of history as my subject,” Harlan continued, “I have tried to take William Blake’s advice, ‘to see the whole world in a grain of sand.’”

The Booker T. Washington Papers project, which Harlan launched with the backing of the National Historical Publications and Records Commission and the National Endowment for the Humanities, represented the first effort to treat the papers of an African American with the same documentary thoroughness as those of the Founding Fathers, presidents, and military leaders. Harlan maintained that immersion in this vast collection over many years made his biography better, even though it slowed down the final product. The Booker T. Washington project was completed before the commonplace use of desktop computers. Only the final cumulative index benefited from computer use. But the series was among the first documentary editions to appear in its entirety online, thanks to the University of Illinois Press and the History Cooperative.

Harlan’s last book was a memoir of his service in the Navy during World War II (All at Sea: Coming of Age in World War II). He was a junior officer on an LCI that ferried troops ashore at Normandy Beach on D-Day. Later in the war his ship sailed to the Pacific in preparation for the invasion of Japan. He would regale those of us working with him on the Booker T. Washington Papers with hilarious stories of his military misadventures and we encouraged him to write the book. He was reluctant to do so because he was not sure his memory alone was sufficient evidence. Only after he reviewed the official log of his ship in the National Archives, and letters sent to him by a shipmate, did Harlan feel he could do justice to the story. He told an honest, frank story of his coming of age in wartime, complete with sexual adventures and the many foibles of war. Like so many of his generation who fought in World War II, he was filled with relief that a new atomic weapon had ended the war. But he would later say that he never learned to love the bomb.

Louis Harlan also will be remembered for his many contributions to the historical profession. He holds the distinction of being the only person to serve concurrent terms as president of the American Historical Association, the Organization of American Historians, and the Southern Historical Association (1989). In addition to his wife Sadie Morton, Harlan is survived by his sister Harriett; two sons, Louis and Benjamin; and a grandchild.