From Water and Radicalism to Archival Friendships

In the September Issue of the American Historical Review

I am delighted that the September 2021 issue of the AHR will be the first of my tenure as editor, as it conveys the chronological, methodological, and spatial reach that has become a hallmark of the journal in recent years. Even though my name is on it, I acknowledge that this issue really belongs to my predecessor, Alex Lichtenstein, and is a testament to his expansive vision for the journal. I thank Alex for his support over this transition and for the marvelous work he did as editor of the AHR. My thanks, too, to the fabulous Bloomington-based staff who pull every issue together so seamlessly. 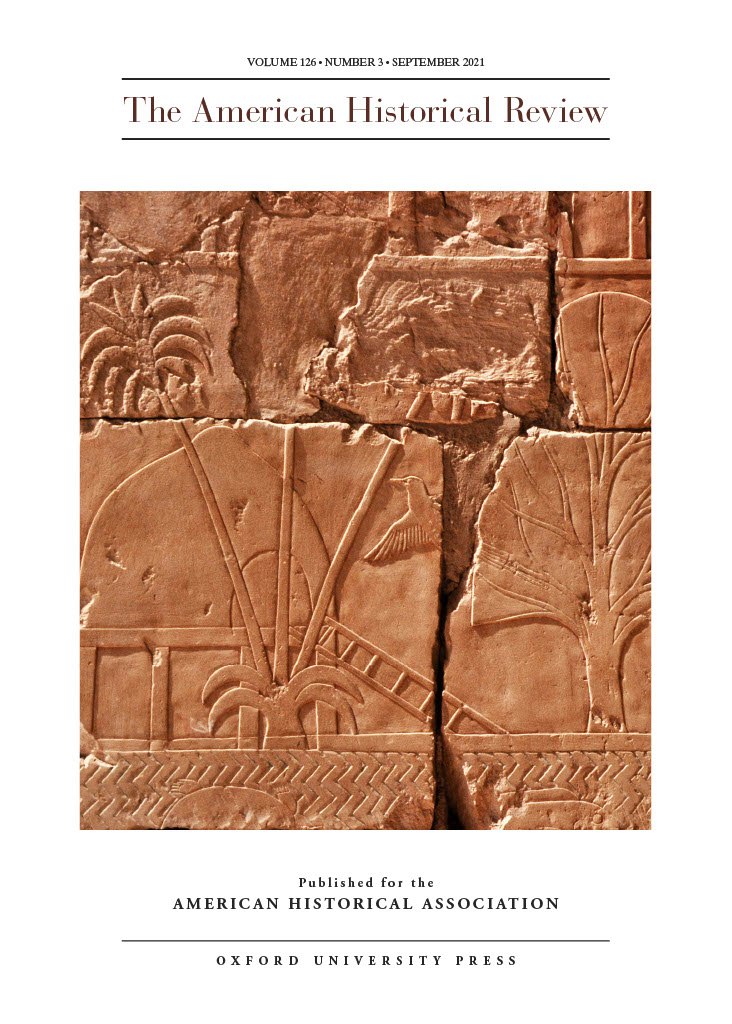 The cover illustration of the September 2021 issue of the AHR, drawn from the walls of the 15th-century BCE Hatshepsut Temple at Deir el-Bahri in Egypt, offers a critical piece of evidence supporting the larger claims that Colin P. Elliott makes in “The Ecology of Exchange: The Monetarization of Roman Egypt.” Depicting what were ubiquitous papyrus reed huts in the Nile marshlands, the relief helps readers visualize the autarkic elements of economic life based on foraging, fishing, nomadism, and reciprocal exchange that continued to flourish separate from, or at least ancillary to, the authority structures and monetary system of Egypt’s Roman rulers. Photograph by Hans Bernhard (CC BY-SA 3.0).

Our lead article, Colin P. Elliott’s (Indiana Univ.) “The Ecology of Exchange: The Monetarization of Roman Egypt,” offers a critical historical case study of the ways in which ecology intersects and inflects politics, economics, and culture. He argues that the riverine geography and ecology of the Nile valley and the rhythmic nature of its agricultural cycle shaped the meanings inhabitants attached to money, including the invading coins of Greek and Roman polities. The significance of water also hovers over “World History and the Tasman Sea” by Alison Bashford (Univ. of New South Wales). She recasts James Cook’s 1770 trip less as a significant first contact between Englishmen and Indigenous Australians and more as a meeting of three peoples who held radically different perspectives on the passing time: the Polynesian Tupaia, the Englishman James Cook, and a variety of Aboriginal peoples whose names we still do not know. Bashford shows us how on either side of the Tasman Sea lie human histories of almost incommensurably different temporal orders, separate for several centuries, and suddenly connected in 1770.

Two articles push on the more familiar ways in which historians have seen emancipation and minority peoples. Adriana Chira (Emory Univ.), in “Freedom with Local Bonds: Custom and Manumission in the Age of Emancipation,” urges readers to reconsider established genealogies for emancipation by exploring how African-descended rural communities across Latin America in the first half of the 19th century forged freedom from below in the shadows of highly exploitative extractive economies. Through manumission and legal actions to defend freedom, peasants of African descent on the margins of the global economic system grounded their rights in state structures as local custom. In “Capitulations Redux: The Imperial Genealogy of the Post–World War I ‘Minority’ Regimes,” Laura C. Robson (Penn State Univ.) argues that minorities’ treaties with various Balkan, eastern European, and Middle Eastern states had little to do with European concern for actual minority populations. Rather, they represented a new iteration of an imperial vision that reinscribed relations between the Ottoman Empire and various European powers.

The September issue of the AHR conveys the chronological, methodological, and spatial reach that has become a hallmark of the journal.

Three other articles offer fresh perspectives on the histories of 20th-century communism and radicalism. Asif Siddiqi (Fordham Univ.) offers a framework for understanding the circulation and regulation of knowledge in late-period Soviet society in “Soviet Secrecy: Toward a Social Map of Knowledge.” By investigating the domain of Soviet science, Siddiqi sheds light on the work of institutions such as Glavlit, the state’s censorship authority, which supported its goal to maintain the contours of secrecy as a static category. Winston James’s (Univ. of California, Irvine) “To the East Turn: The Russian Revolution and the Black Radical Imagination in the US” offers a more global perspective on the Soviet Union, joining a burgeoning scholarship on Black radicalism in the United States and abroad. James analyzes the responses of US-based Black radicals to the outbreak of both the February and October Revolutions of 1917 up to Vladimir Lenin’s death and examines the policies of the Bolsheviks, especially as articulated through the Comintern, that proved particularly compelling to Black radicals. Koji Hirata (Monash Univ.) takes us in “Made in Manchuria: The Transnational Origins of Socialist Industrialization in Maoist China” to the state-owned enterprises in Manchurian heavy industry that served as a symbol of the “socialist industrialization” in the early years of Mao’s China. He traces industrial Manchuria’s transformation before and after the communist revolution, pointing to how China’s socialist industrialization was decisively influenced by the global spread of state-directed developmental visions and the fundamental interconnectedness between capitalist and socialist practices over much of the 20th century.

Three articles in the issue offer fresh perspectives on the histories of 20th-century communism and radicalism.

Method and sources are the subjects of “Critical Digital Archives: A Review from Archival Studies” by Michelle Caswell (Univ. of California, Los Angeles) and Itza Carbajal (Univ. of Washington). They urge historians to pay more attention to discussions surrounding digital records and archival practices emerging from the realm of archival studies, identifying key themes and corresponding debates about digital records in contemporary archival studies scholarship. As Caswell and Carbajal suggest, deeper knowledge of digital archival theory and practice is not ancillary to historical work, but provides important context to do digital history better.

The widely lauded History Unclassified is back in the September issue with three intriguing pieces. Caroline Grego’s (Queens Univ. of Charlotte) “The Search for the Kayendo” recovers traces of a hand-carved wooden shovel in the archives, museums, and fields to reveal the West African origins of Carolina Lowcountry rice cultivation. In “Finding Amica in the Archives,” Susan McDonough (Univ. of Maryland, Baltimore County) and Michelle Armstrong-Partida (Emory Univ.) are inspired by their own collaboration and the pressures of the pandemic to call for historians to consider participating in strategic collaborations, mapping out how the discipline could accommodate and reward these initiatives. “Losing an Archive,” a contribution from Catherine Dunlop (Montana State Univ.), asks how climate change will affect place-based historical research and reflects on her experiences of researching France’s mistral wind while simultaneously feeling its powerful gusts.

Along with our usual reviews of books, the issue offers a reappraisal of African historian Luise White’s writings by Kenda Mutongi (Massachusetts Inst. of Technology) and featured reviews of five new works of historical fiction that range in subject and place from the era of late slavery in Britain and Jamaica, rescue operations for Jewish intellectuals in occupied France, and the early struggles for independence in Palestine, to a multigenerational epic set in Zambia, as well as a fictional Abbie Hoffman and his young son liberating the Central Park Zoo.

I want to close with a challenge to readers. We as readers often open the new AHR issue and go right to an article in our own field. Given this issue’s considerable breadth, I encourage you to roam a bit. Try an article totally out of field. I guarantee it will be rewarding intellectually.