The Epic Story of 52nd Street: An Icon Underfoot at the 2020 Annual Meeting

In 2020, the American Historical Association returns to New York City for its annual meeting, for the first time in five years. The diligent scholar of history (or Wikipedia) might already know that the meeting’s headquarters hotels—the Sheraton New York Times Square and the New York Hilton—were both built to house tourists coming to the 1964 World’s Fair. The Sheraton straddles the block between 52nd and 53rd Streets on Seventh Avenue, while the Hilton sits on Sixth Avenue between 53rd and 54th Streets, the very pavement that witnessed the first-ever handheld cellular phone call, in 1972. (Since 1945, Sixth Avenue has officially been Avenue of the Americas, though New Yorkers rarely use that name.) Fresh off their Ed Sullivan appearance in 1964, the Beatles slept at the Hilton, as has every sitting US president since John F. Kennedy. President Trump celebrated his election victory in the Hilton’s Grand Ballroom. 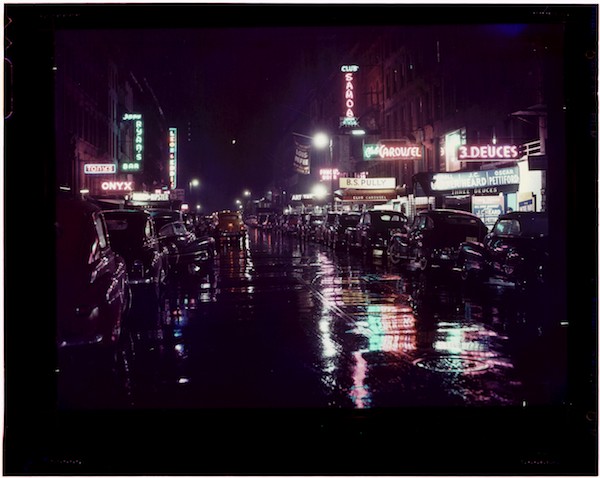 The AIA Guide to New York—a building-by-building compendium of city architecture—is unimpressed. “The architecture is forgettable,” laments the indispensable volume, though it adds that the lobby’s “carnival atmosphere” is worth a gander. Standing outside, a quick glimpse up and down Sixth Avenue yields a banal landscape of glass and steel, punctuated by the occasional architectural gem. But should you now have a sinking feeling that you’re about to spend several days sequestered in the dullest quarter-mile of the world’s most exciting metropolis, fear not. “There are eight million stories in the Naked City,” the film noir declares, and the story of 52nd Street is an epic one.

Two miles long and bookended by the East and the Hudson Rivers, 52nd Street was once a study in stratification. “Block by block, the street changes, like a fancy layer cake,” suggested Life magazine in 1937, “from luxury [apartments] to tenements to smart shops to night clubs and back to tenements.” When one walks from east to west, the street begins at a spot memorialized in the 1935 play and film Dead End, which features a gang of street children who would go on to Hollywood under various monikers, including the Bowery Boys. On either side of the street stand Art Deco–era luxury apartments, including River House, at number 435, one of the finest residential buildings in the city. Heading west, office towers cluster where tenements once stood. In 1955, Marilyn Monroe cooled herself over a subway grate at the southwest corner of Lexington Avenue, her white halter dress billowing, in The Seven Year Itch. At Park Avenue, two landmark buildings face each other in mano-a-mano fashion: Mies van der Rohe’s masterpiece Seagram Building (1958) and McKim, Mead & White’s Racquet and Tennis Club (1918).

Moving along, you’ll reach the four corners of Fifth Avenue, once dominated by Vanderbilts, whose houses included the Richard Morris Hunt chateau on the southwest side; in 1883, its splashy housewarming party became the arriviste family’s ticket into high society. Five years earlier, across the street, noted abortionist Madame Restell committed suicide in her opulent home office after Anthony Comstock arrested her for selling birth control. At the corner stands the New York base of Cartier, a townhouse purchased by the jeweler in 1917 for $100 and a pearl necklace. Heading west and skipping past the Hilton, two storied Broadway auditoriums occupy either side of the street. To the south, the stage at the Alvin Theatre (now the Neil Simon) showcased a dazzling array of musical premieres, from Funny Face (1927) to Porgy and Bess (1935) and Company (1970). Across the way, the Guild Theatre (now the August Wilson), built in 1925 by the Theatre Guild, premiered Eugene O’Neill’s Mourning Becomes Electra in 1931. Notable restaurants once lined the block, including, between Broadway and Eighth Avenue, Gallagher’s Steakhouse, whose two-dollar dinners were deemed “marvelous” but “not cheap” by a 1940 restaurant guide.

Crossing Eighth Avenue lands you in “Hell’s Kitchen,” whose more benign name, “Clinton,” comes from the 19th-century New York statesman who dreamed up the Erie Canal. The hotel on the corner was once a Howard Johnson’s motor lodge; there, FBI agents arrested a fugitive Angela Davis in 1970. Heading farther west, small tenements stand alongside newer residential construction and broadcasting studios. Reaching the West Side Highway and the Hudson River, having now traveled the width of Manhattan, you’ll see the former New York Passenger Ship Terminal rising ahead, extending from 46th to 54th Streets. Cruise lines park where troop and transport ships abounded during World War II; the SS Normandie caught fire and capsized while docked at Pier 88 in 1942.

Notable restaurants lined the block, including Gallagher’s Steak House, whose two-dollar dinners were deemed “marvelous” but “not cheap” by a 1940 restaurant guide.

None of this explains why there are at least three songs, one album, and one film entitled 52nd Street. But once upon a time, if you asked a New York City cabdriver to take you to “the Street,” he would know you meant 52nd between Fifth and Sixth Avenues, a few blocks back to the east. “It was just a normal street,” goes the 1937 Sammy Cahn song, “till it got that off-time beat.”

Although it’s dressed today mostly in the uniform of glass office towers, a spirit of subversion permeates every chapter in the story of the “street that never slept.” During Prohibition, as the old neighborhood surrounding an emergent Rockefeller Center was changing, 52nd Street boasted the area’s largest concentration of speakeasies, housed in quarters that had long before been residential brownstones. After repeal, as many of them became less-illicit nightclubs or restaurants that catered to a broadening clientele, four pivotal venues reigned. Jack and Charlie’s 21 Club, or ‘21,’ was the go-to spot for high society and the political set; Tony’s hosted the Algonquin Round Table’s after-parties for literary and theater folks; Leon and Eddie’s catered to tourists and those turned away from ‘21’ or Tony’s, while the Onyx, and many clubs that followed, showcased the latest music. Columnists flocked to the Street and spread the word. It has been said that 52nd Street’s cramped rooms launched more musicians and 20th-century hit songs than anywhere else in the country, including Rush Street in Chicago, Bourbon Street in New Orleans, Beale Street in Memphis, and the Sunset Strip.

Some well-known “Swing Alley” venues—such as the second location of the nautically festooned Yacht Club, where Fats Waller frolicked—stood west of Sixth Avenue. Nevertheless, “Swing Street” unquestionably lay east, where players and their fans gathered to eat, drink, and jam. As Dizzy Gillespie once said, “52nd Street was a mother” who nurtured the speakeasy era’s Dixieland small-combo music that exploded into big-band swing in the 1930s and later mellowed into the bebop and cool of the 1940s. A partial list of performers reads like a who’s who of jazz history: from Billie Holiday to Ella Fitzgerald to Sarah Vaughan, and from Benny Goodman to Count Basie to Charlie Parker.

During Prohibition, the Onyx, an otherwise conventional speakeasy, provided a place for white male jazz musicians—from Goodman and the Dorsey brothers to freelance radio orchestra instrumentalists—to cut loose after hours without having to account for an audience’s restrictive tastes. Their sessions paid homage to African American musical innovation and bore a professional camaraderie and creative exchange that escaped the lockstep metronome of the popular dance music that paid the bills. After 1933, it all landed on 52nd Street. While the Midtown hotels and nightclubs favored by “café society” featured the commercial (and danceable) rhythms of all-white bands catering to an all-white, largely middle-aged clientele, the 52nd Street clubs nearby showcased the more dynamic sounds of recording artists like Basie, who built a broader white fan base from listeners who longed to hear live music south of Harlem (where swing was played just about everywhere).

Once upon a time, if you asked a cab driver to take you to “the Street,” he would know you meant 52nd between Fifth and Sixth Avenues.

Yet New Deal egalitarianism had its limits, even in New York City. With white musicians “swinging” from one end of 52nd Street to the other, no black faces could regularly be seen on either side of the stage in the mid-1930s, save for those of Teddy Wilson and Billie Holiday, who played intermissions at the Famous Door. “You can be up to your boobies in white satin, with gardenias in your hair and no sugar cane for miles, but you can still be working on a plantation,” Holiday wrote of the Street. “There was no cotton to be picked between Leon and Eddie’s and the East River, but man, it was a plantation any way you looked at it.” Between sets, restricted from mingling with white customers or fellow musicians, they would sit in the alley or in Wilson’s parked car. In time, according to Holiday, “the plantation owners” gave in, as the genre that developed in reaction to commercialism itself became mainstream. “They found they could make money off Negro artists and they couldn’t afford their old prejudices,” the singer added. Down came barriers, and jobs for great black musicians proliferated.

Benny Goodman’s landmark 1938 Carnegie Hall performance had seen tuxedo-clad enthusiasts toe-tapping at their seats and swinging in the aisles. The mood at the city’s nightclubs was more intimate but equally appreciative, seizing a call-and-response spirit that carried over from performers to audience. By the 1940s, younger musicians—Charlie Parker, Miles Davis, Thelonious Monk, and Dizzy Gillespie among them—began appropriating this improvisational character, inflected with an instrumental virtuosity that pushed the creative limits of the genre in bebop, which was written to be heard, not danced to.

When jazz columnist William P. Gottlieb visited 52nd Street in 1948, his camera captured the club names and headliners blazing in neon lights against the night sky and reflected the sultry wetness of the rainy thoroughfare. Those iconic photographs memorialize not a moment of triumph but a street on the precipice of decline. That year, Time described not “a fancy layer cake” but a place “where nightclubs in sorry brownstones crowd each other like bums on a breadline.” It was the end of an era: as jazz moved to other neighborhoods, burlesque made a comeback. “B-girls” and strippers replaced more discreet professional prostitutes, while sex shows, hit men, and stolen goods moved into former jazz dens.

By the mid-1950s, there was little point in preserving any remnant of the former musical mecca, even if crime hadn’t given city officials an excuse to shut it all down. Bemoaned one stripper about the rampant liquor-license suspensions: it was really “such a lousy little street” that it deserved to just be left alone. In time, the skyscrapers came and the former magic of 52nd Street faded and then disappeared altogether in the light of day.

Valerie Paley is senior vice president and chief historian at the New-York Historical Society, where she also serves as director of the Center for Women’s History.