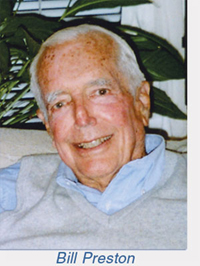 We mourn the passing of our dear friend and colleague, Bill Preston, eminent historian and civil libertarian, who died on Martha’s Vineyard on April 19, 2010, in his 86th year.

Bill Preston’s vigorous scholarly and activist life began when he was a teenager during World War II. On June 6, 1944, 19-year-old gunner Bill Preston, Company C, 743d Tank Battalion landed on Omaha Beach at H hour—to spearhead the D-Day invasion of Normandy. It was, Preston noted some 50 years later in an article in the New York Review of Books, “the first modern amphibious assault in which tanks went ashore first”—a wild and improbable idea that appealed to Preston: “I’d grown up on the New England coast so that being launched [upon]. . . the French coast in a nine-foot high canvas boat with a 32-ton keel and twin propellers running off the tank’s moving tracks was an innovation in seamanship I could admire.”

Miraculously, his tank survived 16 hours of stagnant horror in the sand under relentless attack. He credited the coordination and firepower of the “Navy Boys” who saved them. Still, 21 of the 51 tanks in his battalion were destroyed. Of the 55,000 Americans who landed that day, there were 5,000 casualties; 2,000 died on Omaha Beach. On July 8, 1944, Preston was hit. He later recalled, “the shrapnel hit my spine fracturing the seventh vertebra. I was immediately paralyzed below the neck.” Although he recovered the use of his limbs sufficiently to swim and play tennis, his left side was permanently disabled.

He attended college on the GI bill and graduated from Columbia University Phi Beta Kappa in 1948, and received an MA in history in 1949. He would have gotten his PhD in history from the University of California—where he was a teaching fellow—were it not for the Red Scare and loyalty oaths which aggrieved and insulted him. He left mid-year for the University of Wisconsin. There he met simpatico radicals, such as Professors Howard K. Beale and Merle Curti, and his follow students, Warren Susman and Herbert Gutman, who introduced Preston to John Jay College. For Preston, history was defined by “interpretive daring and imaginative skill to shape a new and better public consciousness.”

From 1954–70 Bill Preston was professor and chair of the history department at Denison College in Granville, Ohio. He resigned to protest the administration’s unacceptable treatment of African American students. His teaching philosophy was explicit: “the only true learning [is] self-appropriated and self-determined. . . . The point of it all was for students to discover their own ability to grow intellectually in a variety of settings: to realize that it took place throughout their lives.” In pursuit of these ideals Preston became board chair of Campus Free College during the 1970s, and applied his vision to the criminal justice students at John Jay College from 1973 to 1988, where he was professor of history and chair of the department. A campus leader, Preston embraced the faculty’s work, galvanized their vision, and emboldened them to new heights of scholarship and activism.

With Blanche Wiesen Cook and Gerald Markowitz, he created and co-chaired the Fund for Open Information and Accountability (FOIA, Inc.) which supported the use and expansion of the Freedom of Information Act to fight government secrecy and the destruction of historical documents. FOIA, Inc. won a great victory in the case of AFSC v. Webster, which prevented the FBI from destroying the basic documents of 20th-century history, specifically the FBI’s Field Office files, which related to individual activists and such programs as COINTELPRO, John Edgar Hoover’s long-time war against civil rights, women’s rights, the peace movement, and many others movements for equity and justice. FOIA, Inc. published Our Right to Know to which Preston contributed regular columns on history and freedom of information. He also contributed regular columns to the Ellen Ray and Bill Schaap’s Institute for Media Analysis’s journals, Lies of our Times and Covert Action Information Bulletin.

His most enduring book is the prescient, powerful Aliens and Dissenters: Federal Suppression of Radicals, 1903–33 (1963, 1994), which Supreme Court Justice William O. Douglas called “A brilliant work. It deals with this nation’s rough-and-ready methods for dealing with ideological nonconformists.” The book established Preston as the premier historian of civil liberties in the Untied States.

His last volume, co-authored with Edward S. Herman and Herbert I. Schiller, Hope and Folly: The United States and UNESCO, 1945–85 (1989), was hailed by Publisher’s Weekly: This is a “painstakingly documented book [that] defends UNESCO with passion and intelligence.” It chronicles the history of UNESCO and the Reagan administration’s disinformation campaign against it, and chastises the U.S. “media for echoing the anti-UNESCO government line.”

A son of high society activists, nephew of ACLU director Roger Baldwin and philanthropist Evelyn Preston, Bill Preston dedicated his life to passion, history, politics, justice, and betterment for all. He had magnificent children who made him so proud and filled his life with love: Matthew, Margo, Michael, Evie, and Lauren. Each day his life was filled with civility and generosity. He maintained a daily pattern that included cross-word puzzles and cocktails; poetry, friendship, and scholarship; and there was always room for surprises. He ended his splendid 1971 essay, “Shall This Be All: U.S. Historians vs. William D. Haywood,” in Labor History with a tribute to “poetry and soul—the kind Joe Hill called for, that is ‘radical insight and defiant humor.’” Bill Preston’s entire life was inspired by “hope for the future of our global mudball.”