History in a Public Square 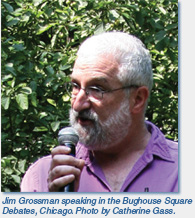 I’ve been fortunate to have multiple opportunities to practice historical scholarship and teaching in a wide variety of venues. It began where so much of our work as historians begins, with the example set by a graduate adviser who never drew a line between the academy and public culture, between the monograph and the film as legitimate formats. I’ve had the privilege of support for this diversity of historical production from colleagues and workplace supervisors (yes, outside the world of faculty appointments, historians have “bosses” to whom they report). It is now an even greater privilege to be asked to serve as executive director of the American Historical Association.

I begin with a humbling experience on my mind. A wide variety of historical practice over three decades has led me to podiums and microphones in all sorts of places, with all sorts of audiences. My first lecture (as a graduate student with 500 faces in the hall) was both scary and sobering, especially when I later was told I had put most of them to sleep. So was that first graduate seminar as a beginning assistant professor when I wondered whether I really knew much more than the 13 students gathered around the table. Then it got easier. The first time in front of a radio microphone or a camera. Speaking to audiences who probably knew virtually none of the context that one can assume even among students in a beginning survey course. Been there, done that. I was prepared to move on, from Chicago to Washington, to new challenges that would be formidable but hardly terrifying.

And then I agreed to do something I had never done before, thinking that it wasn’t much different from other public speaking venues with a focus on history.

Every July the Newberry Library sponsors the “Bughouse Square Debates,” an evocation of the most lively public speaking venue in the United States during the first half of the 20th century. The main event looks like what we now think of as a “debate,” with two individuals taking opposite positions on an issue—but with the added twist of a large crowd encouraged to comment freely as inspiration occurs. It is the heckling that gives the event its spirit.

Something closer to the true Bughouse Square debate tradition emerges after this classic debate, as speakers take turns mounting one of the four soapboxes placed in different places in the park. The Bughouse Square “debates” were generally less contests between two designated speakers, than between the soapbox orator and the audience. Tradition has it that in the old days the hecklers would dash across the street and into the library for a quick look on the reference shelves before returning to the park to confront the speaker with “the facts.”

“Now that you’re leaving,” my colleague said one day last spring, “you should do Bughouse.” Never mind that no Newberry staff member in recent memory had done Bughouse. It didn’t sound so difficult. Mount the soapbox and talk for 15 minutes about the importance of history to public culture. Take advantage of the upcoming Civil War sesquicentennial and talk about commemorations of Confederate heroism and the meaning of the war. Why that meaning still matters. I brought notes. I was ready for my 15 minutes.

But I wasn’t. The previous speaker talked about health care. Something the crowd could really get into. I watched, getting nervous, wondering what a card-carrying historian was doing in this venue. I climbed the soapbox. A soapbox is very small. It is almost impossible to shift your weight, or step to one side. As someone who likes to walk when I lecture, I suddenly felt my knees shaking. Holding the microphone I realized that without a table, podium, or whatever, I couldn’t turn a page; indeed, I should have brought a nice stiff card instead of three pages of notes. After years of holding forth and thinking I had something to say, I had finally—and literally—mounted the proverbial soapbox and realized that I was immobile and figuratively naked in front of the crowd.

An ambulance passed along the street, siren blaring. I stopped but decided not to wait the seemingly endless minutes that it was taking before the noise would completely pass into the distance. My peroration, a bitingly ironic letter written by an ex-slave about the meaning of freedom, clearly was too long and was hard to read in this venue. Having almost lost the crowd, I cut it short and talked about Reconstruction and the conflict over the concept of freedom. Why that conflict matters to us. My 15 minutes had passed.

Despite the obligatory kind words from my family, I knew that this had not been my finest moment. But I also know how I would do it next time. And I realized that more of us need to do more of these sorts of things. Most venues are less challenging than this, and most of us will figure it out for the second time around. Moreover there was enough heckling that I was able to engage some of the audience in debate that I found stimulating and useful to my toolkit as a historian.

Take risks. Get out there in public and talk about history and why it matters.

James Grossman is the executive director of the AHA. Previously he served as vice president for research and education at the Newberry Library.