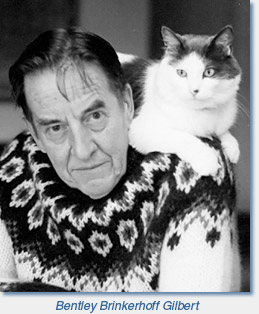 Bentley Brinkerhoff Gilbert, emeritus professor of history at the University of Illinois at Chicago, died in Mansfield, Ohio, on April 5, 2008, his 84th birthday. Mansfield, in east-central Ohio, where his family had lived since the mid-19th century, always meant a great deal to Bentley Gilbert, and he returned there to live shortly after his retirement from UIC in 1997. He was especially proud that his great-grandfather, Brigadier General Roeliff Brinkerhoff, served in the Union Army under William Tecumseh Sherman and was in charge of the field transportation of the Army of the Ohio. Gilbert graduated from Mansfield High School in 1942 and served during World War II with the U.S. Army Air Corps 308th Airdrome Squadron in the Pacific Theater, with campaign service in New Guinea and the Philippines. His own war experience, as well as that of his father in World War I in France and his great-grandfather in the Civil War, always remained of abiding concern in Gilbert’s scholarship and teaching. This interest was especially reflected in the second volume of the Lloyd George biography and in his short book, Britain, 1914–45 (1996). By the 1990s, save for his graduate component, Gilbert was teaching mostly military history. Undergraduates would squirm with delight—or not—when Gilbert would bring to class antiquated but well-preserved family military heirlooms for their inspection.

After his discharge from the military, Gilbert received his BA (1949) at Miami University, Oxford, Ohio, and an MA at the University of Cincinnati (1950). He worked under Paul Knaplund in British history at the University of Wisconsin at Madison, where he received his PhD in 1954. Bentley Gilbert’s first permanent job was teaching European history at Colorado College (1954–67) and he came to what was then the University of Illinois at Chicago Circle in 1967. Despite its later upgrade to the University of Illinois at Chicago, Gilbert always called UIC, with great fondness, “The Circle.” From his dissertation in 1954 to his last scholarly publications in the mid-1990s, Bentley Gilbert was concerned with the intersection in early and mid-20th-century Britain of social policy and politics, with the minutia of the working out of the social plans of the New Liberalism and with the political agendas of the men— Masterman, Lloyd George, Beveridge—who implemented the grand vision. His first book, The Evolution of National Insurance in Great Britain: The Origins of the Welfare State (1966), focused on the process of how social insurance rather than socialism became the framework for an eventual welfare state within a capitalist society. This work was followed in 1970 by British Social Policy, 1914–39, in which Gilbert discussed the development, admittedly somewhat lackadaisical, of welfare policy before the outbreak of World War II. He concluded that “This policy evolved, like the British empire, in a fit of absence of mind.” In 1973, Gilbert edited C.F.G. Masterman’s classic work of 1901, The Heart of the Empire. During the next two decades, Gilbert wrote two volumes of a study on David Lloyd George’s life before the premiership. The overall title was David Lloyd George: A Political Life, with Volume I (1987) sub-titled The Architect of Change, 1863–1912 and Volume II (1992) The Organizer of Victory, 1912–16. The second volume won the 1993 Society of Midland Authors Prize for Biography. It had been his intention to round out Lloyd George’s life by completing one volume on the last two years of the war and one on the postwar premiership and political career, but despite completing the work through 1917, it remained unfinished at his death. Gilbert published articles in Albion, the American Historical Review, The Historian, the Historical Journal, and the Journal of British Studies. Bentley Gilbert was a fellow of the Royal Historical Society, received three fellowships from the National Institutes of Health, and in 1973–74 a John Simon Guggenheim Fellowship.

Gilbert served as executive secretary to the North American Conference on British Studies from 1974 to 1978; as editor of the Journal of British Studies from 1978 to 1983; as president of the Midwest Conference on British Studies from 1988 to 1990; and as secretary to the newly formed American Friends of the Institute of Historical Research, London, during the early 1990s. Perhaps his most important administrative contribution to British history in the United States was his successful proposal, in 1983, at the end of his term as editor, to settle the formerly peripatetic Journal of British Studies at the University of Chicago Press, where it has remained and flourished. Bentley Gilbert was chair of the Department of History at UIC from 1988 to 1991.

Gilbert was exceedingly proud of the eight graduate students whose dissertations on 20th-century Britain he directed: Barbara Farr, Barbara Kehoe, Doris Racich, Norman Eder, Neal McCrillis, Andrew Wiest, Eugene Beiriger, and Septimus Paul. He also endowed a fellowship at UIC for PhD candidates in European history. During his years in Illinois he was a lay reader and vestryman at St. Elisabeth’s Episcopal Church in Glencoe. He is survived by four children, Bentley Junior, Margaret, Louis, and Francis, by three step-children, Ellen and Arthur Gallagher and Daisy Archie, and by four grandchildren, Jacob, Sylvia, Ethan, and Lydia Gilbert.