Rethinking America in Global Perspective: A Report on the Institute 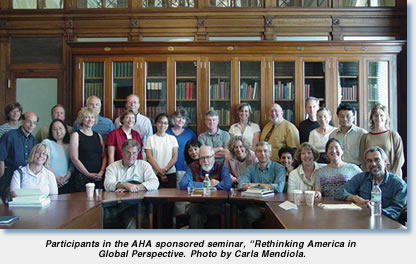 From June 20 to July 15, 2005, the AHA conducted a summer institute entitled "Rethinking America in Global Perspective," for undergraduate and community college faculty. The institute was funded by the National Endowment for the Humanities and designated a "We the People" project. The Library of Congress hosted the institute, providing a beautiful meeting room and access to its unparalleled collections. The Community College Humanities Association and the George Washington University Department of History cosponsored the institute.

Twenty-five participants from around the country met with distinguished scholars while pursuing their own research and curriculum development projects. Most were history faculty, though literature, economics, and American studies were also represented. Participants discussed internationalizing the American history survey course at several workshops on curriculum development. The institute energized the participants. As Rebecca Arnold of San Diego Mesa Community College put it, "My teaching is changed forever, as well as my outlook on history."

Institute co-directors John R. Gillis (professor emeritus, Rutgers Univ.) and Carl Guarneri (St. Mary’s Coll. of California) encouraged participants to enrich their thinking about American history by "exploring the ways America’s story has always been one of interaction and mutual influence with other regions of the world." The institute focused on four weekly themes: America as a borderland or frontier prior to 1776; America in an age of nation-building, 1776 to 1898; the rise to global power between 1898 and 1945; and the challenge of increasing international impact on the country in the years following World War II. Distinguished speakers led discussions on a variety of international forces that shaped U.S. history, including trade across the Atlantic and Pacific, colonialism and imperialism, the rise of the modern nation state, mass culture, and biological exchange. Guest lecturers included Thomas Bender (New York Univ.), Neal Salisbury (Smith Coll.), Karen Ordahl Kupperman (New York Univ.), Eliga Gould (Univ. of New Hampshire), Charles Bright (Univ. of Michigan at Ann Arbor), Michael Adas (Rutgers Univ.), Victoria de Grazia (Columbia Univ.), and John R. McNeill (Georgetown Univ.).

Guarneri noted that he and Gillis hoped participants would be able to work within the requirements of the curriculum to "change habits of thinking about U.S. history." Gillis noted that by showing students that America has been shaped by international forces from the beginning, teachers can "make it easier [for them] to deal with our present predicaments, because they’ve been there in one form or another for a long time." Almost all of the participants intend to revise their courses to consider American history in a wider perspective; several plan to develop web sites, document collections, syllabi, and other course materials to share with their fellow teachers. Others hoped to work informally to promote a international approach to teaching U.S. history, literature, and other topics. Participants will share their completed projects so that they can build on each others’ work. Two of the participants will present the results of their research at the AHA’s annual meeting at a session sponsored by the Community College Humanities Association. Participant Jack Zevin (Queens Coll.) plans to organize a panel at the 2006 National Council on Social Studies meeting where participants will share insights from the institute with an audience of social studies teachers.

The institute was proposed by the informal Conference Group on Inter-Area Studies, which organized three previous summer seminars for community college faculty and two research conferences, each funded by the Ford Foundation: "Transoceanic Exchanges" (2003); "Explorations in Empire" (2001); "Globalizing Regional Studies" (1999); "Seascapes, Littoral Culture, and Transoceanic Exchanges" (2003); and "Interactions: Regional Studies, Global Processes, and Historical Analysis" (1999). This institute was the first project in the series to focus on American history.

—Debbie Ann Doyle staffed the institute and the other projects in the series.