Public History Employers--What Do They Want? A Report on the Survey

Last fall, the AHA's Committee on Graduate Education and the Task Force on Public History conducted a survey of agencies and institutions that employ public historians. The survey questionnaire was distributed to a variety of potential employers, compiled from the AHA's own mailing list of historical organizations, the institutional membership of the American Association for State and Local History, plus publicly available lists of state historic preservation officers and cultural resource management consultants. In the end, we received 201 usable responses from a variety of institutions, ranging from tiny, one-person local historical societies to well-staffed state archives and federal agencies. Most of the respondents were those with direct hiring responsibilities at their institutions. 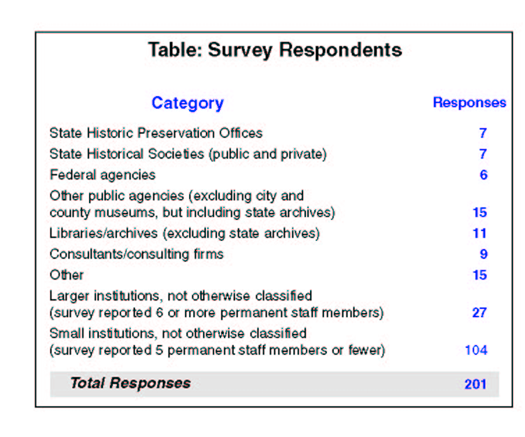 This survey is the most thorough attempt yet by the AHA to determine what employers want when they hire public historians, but more work still needs to be done. Two significant employers are underrepresented among the respondents summarized in Table 1: the federal government and private industry (indeed, we did not even try to canvass the many corporate employers of professional historians). The resulting sample is probably not ideal from a statistician's point of view. But it does reflect the working and hiring conditions faced by many historians who pursue their profession in nonacademic settings.

The survey elicited some surprising and some distressing responses, most of which cannot be reduced to mere statistics. Instead, I want to focus here on six major themes that came across with particular force and clarity:

1. The respondents perceive a deep split between "academic" and "public" historians. Frequently, academic historians were characterized as being too narrow and specialized in their scholarly interests (with no "view of the big picture")—and too elitist to engage in public history at the local level. As one supervisor at a state agency put it, the graduates of most academic history programs manifest an "inability to function in a professional legal/business environment due to [a] lack of experience outside of [the] academic ivory tower.. Graduate programs don't care whether students can function in a . nonacademic environment, probably because the typical history professor could not function in such an environment." The head of a consulting firm added that "generally speaking their educational backgrounds [i.e., graduate degrees from most history departments] have . nothing to do with what real professional historians do," and this point was echoed (at a milder pitch) by other respondents who noted the contrast between "theoretical graduate courses" and either "practical knowledge" or the "ability to understand public interpretation."

2. There are employment opportunities in public history, with three-quarters of the respondents noting that the number of permanent staff positions at their institution had grown (29 percent ) or remained steady (48 percent ) over the previous three years; 68 percent of the institutions had hired at least one permanent staff member in the same period. But most employers are looking to hire at the master's degree level, and not necessarily looking for graduates with MAs in history. Indeed, many seem to prefer a background in museum studies or even archival training: graduate programs in these areas are seen as more likely than academic history programs to include some training in "administration." The current composition of the staff at the institutions confirms these hiring priorities: at institutions with three or more permanent staff members "directly engaged in some kind of historical work" (N=104), 31 percent had a history PhD on staff, 63 percent had a history (and/or public history) MA on staff, and 72 percent had at least one staff member with a master's degree in a different field.

The smallest organizations—that is, those with just a few permanent staff members, if any—rely mostly on volunteers and are happy when they can hire anyone. For these agencies, "Real life experience is more important than academic experience." But the larger organizations (and even many of the small places) are increasingly seeking applicants with advanced degrees in history or a related field. Indeed, a majority of the respondents reported that hiring standards have gone up at their institutions in the past decade, and the most common word of explanation they offered was "professionalization"—professionalization of their own institutions, but also professionalization of public history as a discipline. (In contrast, a handful of survey forms also came back with the question "What is public history?" or the comment "I've never heard this phrase before.") As one respondent noted, "Our parent organization [a municipality] prevents us from making graduate degrees a requirement. The reality, though, is that there are enough skilled people with MAs that it becomes a de facto requirement." The director of a similar institution in another city added, "A PhD is not likely to be hired—[it] indicates a professorial candidate who lost tenure."

Despite their hiring preference for master's degree holders, the survey respondents are not terribly impressed with most history graduate programs—not even the programs that focus on training public historians. The best of these programs were praised for producing graduates with solid technical skills and a firm grasp of the interpretive issues surrounding public history. But a number of respondents also complained that "the public history graduate programs don't give students enough history" (according to the director of a large history museum). Still, a few graduate programs in public history did receive consistently high marks: Arizona State University, Middle Tennessee State University, the Cooperstown program in museum studies, the Winterthur program in Delaware, the University of South Carolina, and the historical administration program at Eastern Illinois University.

3. What are these employers looking for when they hire historians? For most respondents, the answer to this question was a list of the skills and competencies that job applicants (and even many of their recent hires) conspicuously lack: good writing and communication skills (by far the most consistent refrain); an appreciation of local history (any local history, but especially of the institution's own vicinity); an understanding of different audiences (and the ability to communicate with ordinary people); and a willingness and ability to work with others. As the director of education at one large museum put it, "I wish new hires realized [that] 'Work is not a debating society.'" Intriguingly, the phrase "work ethic" appeared several times among the responses, both as a desirable trait and, implicitly, as something that academic historians lacked, at least in a real-world setting. As noted earlier, the respondents also stressed the importance of administrative skills: time management, budget planning, computer literacy, employee supervision, marketing, fundraising, grantsmanship, institutional governance, etc. One person recommended—only half in jest, I think—that "'cross-training' with the Business School" would be a worthwhile part of any graduate degree in history.

The shortage of administrative expertise and even "people skills" (another recurrent phrase) among recent history graduates is perhaps understandable. So, to a lesser degree, is the absence of technical proficiency in such areas as oral history, historic preservation, archival management, and museum-based education—all desirable skills, according to these employers, but skills that can often be honed "on-the-job with good mentoring." More disturbing, I think, were the many responses that pointed to a lack of basic research skills and historical expertise on the part of recent history MAs. One employer declared, "Research and critical analysis seem to be disappearing from all of the traditional academic work environments and . [this is] flowing over into nonacademic settings." Another wrote that many applicants "[don't know] how to interpret a decent primary source. Grad students spend too much time reading secondary sources and then spend too much time criticizing them." And a few complained that recent graduates lack any grasp of the "broad sweep of history to make connections for the public" (which contradicts the repeated calls for a greater familiarity with local history).

4. Nearly every respondent stressed the importance of internships or some other kind of practicum for would-be public historians as the only way to gain the hands-on experience that so many find lacking among job applicants. Internships "benefit . the students and institutions alike," but only if they are well structured and well supported by both a student's graduate program and the institution. Unfortunately, a number of employers complained about "colleges and universities [that] send interns to museums without adequate programming," or where the "museum had no professional staff to oversee/train the intern." One employer, from a state archive, suggested that the AHA should "develop programs where the intern experience becomes more structured from both ends and moves toward apprenticeship." Another suggested a more decentralized approach: "I believe that all graduate students should be required to complete at least one internship . [and] all professional historians should mentor the new graduates."

5. For a third of the small institutions in this survey (that is, with no more than five permanent employees), internships are the only formal contact they have with local history departments. According to the director of one county museum, "university professors don't want 'outsiders' in their classes and eschew relationships with museum employees, especially from smaller museums. It's difficult to even inform them of internship and research opportunities for their students." Nonetheless, most respondents—from both small and big institutions—do want to work more closely with their university-based colleagues; they think it would be good for everyone involved. Several employers suggested that the AHA should facilitate these relationships, without providing any practical suggestions to that end.

Other respondents did offer substantive advice. Two of the most interesting suggestions came from directors of county historical societies. One suggested that "Graduate program[s] . should do a community 'check up' at least once a year—invite local preservation officers, planners, historians, and museum administrators to talk to their students, conduct behind-the-scenes tours, etc." Another pointed out that "graduate students need to become more aware of what the smaller nonprofits are attempting to provide, and possibly be required to give some volunteer time or assistance to help these agencies grow."

6. Finally, the public history employers we surveyed do not consider the American Historical Association to be a very important representative of their own professional interests, except at the largest institutions (that is, the ones most likely to be included in the AHA's Directory of History Departments and Historical Organizations). Instead, they are drawn towards the statewide and regional museum and historical associations, plus a few national organizations (starting with the National Council on Public History, the American Association for State and Local History, and the American Association of Museums); and they think the AHA should work much more closely with these "agencies already in the field." Several respondents applauded us for making an effort to connect with local and public historians, especially at the small institutions "like ours [that] are doing public history—sometimes badly, sometimes fairly well—without ongoing professional guidance." But others were "appall[ed] that the AHA is just now beginning to look at graduate education. I watched as the job market fell apart in the early '90s. Other than hand-wringing at dismal statistics, the AHA . didn't give a damn" (emphasis in the original).

There is a significant contradiction at the heart of these survey results. On one side, the respondents speak to a growing professionalization of public history in all its forms, coupled with a strong sense of the civic engagement, intellectual challenge, and sheer excitement of the field. (I stopped counting the number of times someone complained about undersized budgets or the relatively meager salaries of public historians, and then offered the following advice to young people interested in joining the field: "go for it.") On the other side, the respondents note that too many of their potential employees—including the graduates of otherwise well-regarded MA programs—are poorly trained, with imperfect technical skills, a weak command of history and the tools of historical research, inadequate writing skills, and a limited ability to deal with the public. Resolving this contradiction must be central to any effort the AHA makes to improve graduate training or to reach out to public historians.

—Philip M. Katz is research director of the AHA's Committee on Graduate Education and Committee on the Master's Degree in History.