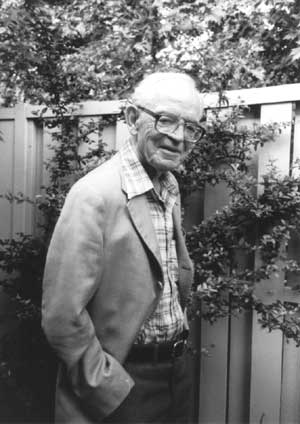 Robert R. Palmer, world renowned scholar of European history and past president of the AHA, died at the age of 93 on June 11, 2002. There is little question that Palmer was the preeminent authority of his generation on 18th- and early 19th-century French and European history. The case might also be made that the corpus of his scholarship constitutes a singular and durable contribution to the postwar liberal tradition in American historiography associated with such figures as Richard Hofstadter and C. Vann Woodward.

R. R. Palmer was born in Chicago on January 11, 1909. He attended the city's public schools, and in a city-wide Latin competition won a full scholarship to the University of Chicago, where he studied the revolutionary era with Louis Gottschalk and graduated with distinction in 1931. His midwestern roots and the sense of being a self-made man no doubt formed key parts of his intellectual armature. He received his PhD at Cornell under Carl Becker in 1934, though without imbibing Becker's somewhat cynical view of the French philosophes. Palmer referred to his doctoral dissertation on American influences on French revolutionaries as "a youthful indiscretion," and never published it. Instead he turned to a completely different subject and wrote the first of his impeccably balanced, finely crafted, and remarkably insightful books, Catholics and Unbelievers in Eighteenth-Century France (1939). Without abandoning his commitment to Enlightenment values, Palmer sympathetically portrayed the efforts of believing Catholics to accommodate certain currents of modern thought, but demonstrated where they were compelled to draw the lines on such issues as sin and salvation.

In the shadows of a malignant fascist tide, Palmer next turned to the French Revolution in its most aggressive, tumultuous, and problematic phase, the Reign of Terror. Based entirely on the voluminous printed sources available in this country as the war interrupted scholarly contact with the continent, Twelve Who Ruled: The Year of the Terror in the French Revolution appeared in 1941, has been in print ever since, and is arguably the best book on the French Revolution ever written by an American. Palmer's study was virtually the first in any language to focus on the Committee of Public Safety. Appointed by the French National Convention, the committee functioned as a kind of war cabinet vested with near dictatorial powers to lead a floundering, besieged French Republic out of its manifold crises. Palmer's moral compass was set in relation to liberal democracy, and his narrative accordingly depicts the Jacobin dictatorship as at once necessary, flawed, creative, successful, and disastrous. Moreover he shows how the Terror was shaped in its application by particular circumstances, especially by the character of individuals wielding power as emissaries of the convention in the provinces. Robespierre came to embody most of the paradoxes and contradictions of the Terror, and Palmer's portrait of that revolutionary ascetic is unsurpassed in its nuance, insight, and balance.

Palmer began teaching at Princeton University in 1936 and was named Dodge Professor of History in 1952. During the war, poor eyesight precluded active military service so he worked for the War Department in Washington as a staff historian, co-authoring two volumes in its official history on the organization and training of ground combat troops in World War II (1947–48). Back at Princeton he completed his most influential work, a textbook on modern European history that became the gold standard for classroom books. First published by Alfred Knopf in 1950, A History of the Modern World was revised for subsequent editions in collaboration with Joel Colton. In the twilight of his unparalleled publishing career, Mr. Knopf named Palmer's textbook, in company with various literary giants, as one of his proudest accomplishments. Generations of college students valued its lucid prose, artful weaving of detail and argument, and (perhaps without realizing it) its humane liberal perspective. The textbook was translated into several languages, is still in print today, and has sold well over one million copies.

In 1959 and 1964 Palmer published the two volumes of his magisterial study, The Age of the Democratic Revolution: A Political History of Europe and America, 1760–1800. During the 1950s he had collaborated with French historian Jacques Godechot on a number of conference papers laying the groundwork for their respective comparative histories of the period. But unlike Godechot (whose La Grande Nation: l'expansion révolutionnaire de la France dans le monde, de 1789 à 1799 was limited to continental western Europe and solely to the revolutionary decade), Palmer incorporated the American colonies, the British Isles, and several east-central European states into his panoramic history. For this unprecedented project he drew on a reading knowledge of French, German, Italian and Dutch, and enlisted assistance for such languages as Hungarian and Polish. The first volume of this prize-winning work was entitled The Challenge. Its argument hinged around the concept of "constituted bodies," cooptive oligarchies of one sort or another ranging from the unreformed British Parliament to the Estates of the Netherlands and the Parlements of France. The common challenge for a new vision of citizenship, even where absolute monarchy seemed to prevail, was how to break the stranglehold of these bodies with their parochial and often self-serving defense of traditional privileges and "liberties." Palmer distrusted aristocratic Whiggism in its various forms, and pointedly dissected its best-known exemplar, Edmund Burke. The volume concluded with two chapters on the French Revolution of 1789, which he viewed as the decisive breakthrough against the constituted bodies of the old regime.

Volume II took up The Struggle unleashed by the French Revolution, in France and elsewhere, including Britain itself, Ireland, the Low Countries, Italy, and such distant places as Poland. The great division in Europe in the 1790s, Palmer argued, was not the conflict between France and a coalition of hostile states, but a conflict of groups within various states against other groups—between minorities of revolutionary patriots or democratic forces against conservative, counter-revolutionary, or traditional forces. There was no question where the historian's sympathies lay, but as always his analysis of this political history was generally balanced, fair-minded, and incisive. When in 1990 Palmer received the prestigious Feltrenelli Prize for lifetime scholarly achievement from Italy's Accademia Nazionale dei Lincei, his Age of the Democratic Revolution was being recognized as one of the great achievements of 20th-century historiography.

Completion of that work clearly marked the end of a period in Palmer's life. Long a fixture at Princeton—where his graduate students were generally dazzled by his command of the field, forceful opinions, and inimitably dry wit—he now felt the need for dramatic change. In 1963 Palmer accepted a position as dean of faculty at Washington University in St. Louis. His stint as an administrator proved brief, however, and in 1966 he returned to teaching and writing as a professor at Yale for the next decade, and was elected president of the American Historical Association in 1970. Retiring in 1977, Palmer and his wife Esther relocated back to Princeton, where for a time he was a long-term visiting scholar at the Institute for Advanced Study. His major project in that transitional period was his pitch-perfect interpretive history, The Improvement of Humanity: Education and the French Revolution (1985).

By the time Palmer retired, a new set of perspectives seemed to dominate the field of French revolutionary studies: the neoliberal (or neoconservative) revisionism of François Furet and his colleagues, the discourse analysis pioneered by Quentin Skinner, and the approaches generated by the influence of cultural studies. These departures held limited appeal for Palmer. While grateful to Furet for restoring the importance of the political in French revolutionary studies, he was put off by the "persistent one-sidedness" of the French revisionists. The so-called orthodox historians, he wrote privately, "at least saw the Revolution as a real conflict, a struggle between opposed interests on vitally important issues, and not just a matter of words, discourse, images and symbolism." In the last phase of his career, then, Palmer simply pursued his long-standing engagement with the difficult formative era of liberal democracy on his own terms. Ironically, however, it was the "revisionist" camp that finally arranged for a translation of Twelve Who Ruled in conjunction with the Revolution's bicentennial. Indeed Furet himself wrote a laudatory and low-keyed introduction to the volume, setting aside his own obvious disagreements with the thrust of Palmer's account—an act of generosity that at once gratified and puzzled Palmer, whose work had never been adequately recognized in France.

The final, relatively unheralded phase of R. R. Palmer's career proved to be distinctive and rich in its own way, like a composer of great symphonies who turns to the production of exquisite chamber pieces. These shorter works also embodied Palmer's belief in the duty of translating French materials for an Anglophone readership—a time-consuming activity which began with his graceful translation of Georges Lefebvre's synthesis on 1789. Published in 1947 by Princeton University Press (his publisher for all the volumes in question) as The Coming of the French Revolution, it immediately became a classic classroom text. His other translations included Louis Bergeron's masterly synthesis, France Under Napoleon (1981), and Jean-Paul Bertaud's important thesis, The Army of the French Revolution (1988). Now, Palmer went on to produce a series of original explorations that combined the editing and translation of primary documents with extensive introduction and commentary. These volumes dealt with figures in France's political and intellectual landscape who each exemplified in one way or another the quandaries of the liberal persuasion.

In The Two Tocquevilles: Father and Son (1987), Palmer introduced Hervé de Tocqueville and his "Survey of the Reign of Louis XVI" to shed a critical light on the perspective of his better-known son Alexis who, for all his brilliantly innovative historical sociology, occasionally manifested the kind of Whiggish prejudices always suspect to Palmer. Next he published From Jacobin to Liberal: Marc-Antoine Jullien, 1775–1848 (1993), the story—told through translations and extensive commentary—of an idealistic young acolyte of Robespierre's who survived and adapted to a succession of French regimes without losing his faith in liberty, equality, and democracy. One might easily see between the lines that this book reflects something of the author's trajectory as well as his subject's. Palmer followed his study of Jullien with a similar book on a different kind of liberal experience, J.-B. Say: An Economist in Troubled Times (1997), and he intended to crown this series with a volume devoted to Henri Grégoire, a clerical reformer, liberal political activist, advocate of emancipation for Jews and blacks. Failing eyesight, however, made it impossible for Palmer to complete this project.

In an unusually long career dedicated to historical scholarship, R. R. Palmer from beginning to end set the most exacting standards in interpretive argument and craftsmanship. Each of his books had a palpable excellence and solidity—from his deftly painstaking translations to his grand works of synthesis to his later pointillist studies. And through them all his own character was refracted—his independence of mind, his American-style pragmatism, and his abiding respect for liberal-democratic values.