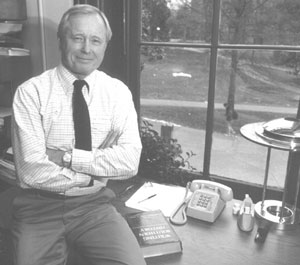 Hugh Davis Graham, the Holland N. McTyeire Professor of History at Vanderbilt University, died on March 26, 2002, of esophageal cancer at his new home in Santa Barbara, California. He was only 65. With unusual courage and grace, he had battled his affliction for five years, a near record not only for survival but for years of continued engagement in teaching and scholarship. He died just after the publication of his final book, and just before an international conference on the Reagan presidency, a project that he had helped plan and organize. At his death he was a plaintiff in a lawsuit challenging an executive order by President Bush which limited public access to the records of former presidents, and thus to many of the records of President Reagan.

Graham, the son of a Presbyterian minister, and one of three talented Graham boys, was born in Arkansas, but grew up in Nashville. His appointment to the McTyeire Chair in 1991 brought him home again. With his usual exuberance, he committed himself completely to Vanderbilt. In the next decade he served as department chair for two years, worked tirelessly to improve graduate work, served on numerous college and university committees, won major awards for his teaching and service to the university, and was author or co-author of two books, editor or co-editor of two more. He was a model colleague, generous to a fault, full of good will, and optimistic even in the face of illness and pain. His contribution to Vanderbilt marked the climax of a long and productive career as a historian.

As an undergraduate at Yale, Graham majored in history. He moved to Stanford University for graduate work, completing his PhD in history there in 1964. For the next three years he taught in nontenured positions at Foothills College, San Jose State, and Stanford. From 1967 to 1971 he was an associate professor at Johns Hopkins University, where he served as associate, and then acting, director of the Institute of Southern History. In the midst of several civic involvements, he co-directed a task force for the National Commission on the Causes and Prevention of Violence in 1968–69, and co-edited the commission's report, Violence in America. In 1967, he published his dissertation, Crisis in Print, a survey of newspaper reaction to desegregation in Tennessee.

In 1971 Graham moved to a tenured position at the relatively new University of Maryland Baltimore County. Here he became a campus leader. He remained until his move to Vanderbilt in 1991. He began as dean of the social science division, and later served as dean of graduate studies and research. In these years he won an unusual number of fellowships and grants (Guggenheim, NEH, Wilson Center, National Institute of Education, American Enterprise Institute, Lyndon Johnson Foundation, and Social Science Research Council). His early interest in civil rights, and in southern politics, led him to join Numan Bartley in 1975 in writing Southern Politics and the Second Reconstruction, an update of the classic work by V. O. Key. During these busy years Graham began a new line of scholarship, involving the complex process of federal policy-making and its implementation. The fruit of this would be three major books, and a deserved national reputation as the most successful pioneer in the newly self-conscious field of policy history.

His first policy study, The Uncertain Triumph: Federal Education Policy in the Kennedy and Johnson Years (1984), records the successful achievement of major federal aid for public education. Graham emphasized new legislative strategies, such as the use of task forces, but was most original in following the legislation into the implementing stages, when powerful outside constituencies, working with federal agencies, often so reshaped policy as to move far beyond congressional intent. Next was Graham's most influential book, The Civil Rights Era: Origins and Development of National Policy, 1960–1972 (1990). Once again irony abounds. As fascinating as the successful legislative victory in gaining three major civil rights acts was what happened later. Well-organized pressure groups, some with symbiotic ties to such federal agencies as the EEOC, slowly helped shift civil rights policy away from the original congressional intent (nondiscrimination) to overt preferences for designated minorities. No one before Graham had ever looked so closely at the internal dynamics of policy development, or bared so many contradictions in federal policy.

In his last years, even while suffering intervals of chemotherapy, Graham completed his last policy study, one that complemented his work on civil rights. In Collision Course: The Strange Convergence of Affirmative Action and Immigration Policy in America (2002), he shows how early civil rights legislation, intended largely to correct injustices to African Americans, eventually offered protections, and favoritism, for a new flood of immigrants from Asia and Latin America. Many immigrants, who qualified as minorities under federal law, were among Americans with the highest incomes. This all developed without any clear congressional intent and with little public scrutiny. Few wanted to agitate the complex issues involved, or challenge the organized minority groups who enjoyed preferential treatment. This has contributed to present confusions, and new policy debates, involving both immigration and affirmative action. It reveals the often unforeseen, or unwanted, effects of social legislation.

Such a brief survey of Hugh Graham's contribution to historical understanding leaves so much out. This includes dozens of articles and chapters in books, a co-authored book on graduate education, several edited or co-edited books, and his involvements with the major historical associations. Above all, such a survey cannot communicate the vibrant personality that lay behind all the work, or express the appreciation of all the colleagues and students who gained so much insight, or support, from his friendship and his teaching.