Debating Gay Studies in the 1970s

In 1975, the AHA Newsletter (the predecessor to this very magazine) erupted in conflict over whether historians should pursue new “fads.” Two PhD students, concerned about the “drift of the discipline” and critical of a proposal to put the organization on record in support of gay history, imagined scholarship on “hitherto virgin topics,” including the history of consorts, seminary dropouts, unemployed historians, neurotics, wheelwrights, and ugly persons. Declaring themselves “moved to new heights of alarm and despair” by developments that were forcing them to “consort with the harlequins, hucksters, and hobbled persons who largely make up the historian’s trade,” they warned that scholars were “placing a premium upon the odd, the unusual, even the suspect, research angle.” Gay historians in particular were “on the prowl,” joining others who were “shrinking” the discipline’s focus to “the absurdly narrow interests of the faddists.” Responding to two gay historians who had written in support of the proposed AHA resolution, the students asked, “Dare we suggest that the paucity of courses in gay history owes to the obvious fact that the history of this and other ‘sexual minorities’ is unimportant?” They dared. 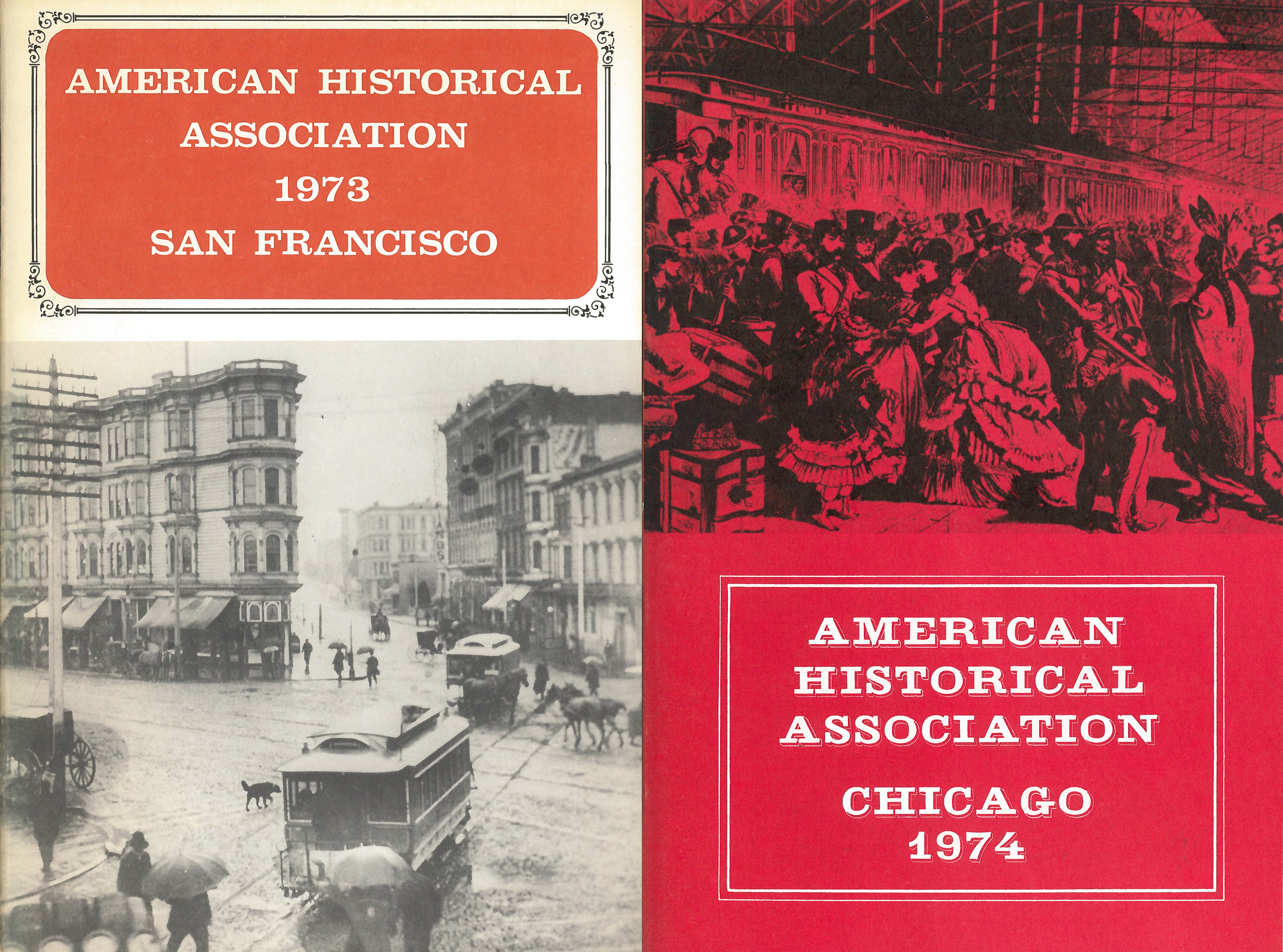 In San Francisco and Chicago, the 1973 and 1974 AHA business meetings discussed resolutions in support of gay historians and their work. AHA Archives

Six months later, a critic of the critics responded, asking in the newsletter, “What lesser claim does the study of women, of slavery, of neurotics, of wheelwrights, of ugly persons enjoy upon ‘fundamental questions about knowledge’?” The director of the University of Pennsylvania Press also admonished the students: “As Oscar Wilde might have said, jokes are too serious to be left in the hands of the righteous.” After noting that a study of ugliness could be illuminating, he declared that he would welcome manuscript submissions on this topic.

When I first read the students’ antigay screed while working on my new book Queer Public History, I laughed. I have published work on what the students might have imagined as intersecting horrors, including unemployed gay historians and queer neurotics, so my curiosity was piqued. Previously, I dated the origins of the AHA’s engagement with gay issues to the 1979 founding of the Committee on Lesbian and Gay History (CLGH, now the Committee on LGBT History), which I chaired in the early 2000s. In fact, the CLGH’s first newsletter mentions an earlier group in 1973, the Committee of Gay Historians (CGH), and an earlier name for the CLGH, the Committee on Homosexuality in History, in 1978. The Committee on LGBT History is often mistakenly identified as an AHA committee, but it is one of many independent organizations that are affiliated societies of the AHA. The AHA did not establish its own Committee on LGBTQ Status in the Profession until 2015. As it turns out, however, minutes from the AHA’s annual business meetings and the AHA Newsletter show that the Association actively engaged with gay issues as early as 1973.

Minutes from the annual business meetings and the AHA Newsletter show that the AHA engaged with gay issues as early as 1973.

At the AHA’s December 1973 business meeting, Dennis Rubini (Temple Univ.), representing the CGH, proposed a resolution that condemned “any form of harassment or discrimination directed at single and gay women and men and members of all other sexual minorities who respect the rights of others,” regardless of criminalization. The references to single people and the criminalization of sex can be situated in the historical moment. Just one year earlier, the US Supreme Court had announced two important rulings on the rights of the unmarried: Eisenstadt v. Baird, protecting access to birth control, and Stanley v. Illinois, protecting parental rights. Gay activists thought these decisions might have positive implications for them. As for the criminalization of sex, more than 20 states reformed their laws against consensual sex in the 1970s.

In response, president Lynn White asked whether the resolution would “place the association in a position of condoning the breaking of laws.” Arthur Warner, co-chair of the National Committee for Sexual Civil Liberties, noted that “the AHA would simply be following in the path of organizations like the American Bar Association, the American Sociological Association, and the American Psychiatric Association.” Two weeks earlier, the APA Board of Trustees had both approved the declassification of homosexuality as a psychiatric disorder and endorsed the repeal of criminal laws against private consensual sex for adults. The AHA resolution passed 129–38.

Rubini then presented a second, more contentious resolution that would condemn “historical bias” based on “sexism in general or homophobia in particular” and call on “all historians to make available to gay people and all others engaging in consensual sexual acts all facets of their historical birthright.” Rubini accepted one amendment that changed “all historians” to “the historical profession,” but he resisted another to delete language criticizing historians for perpetuating the myth that “homosexual acts are unnatural or evidence of sickness.” After the latter was approved 64–60, the resolution passed 76–56.

The business meeting then discussed a third resolution, which called for the AHA to support the legalization of consensual sex. After the AHA president and parliamentarian raised procedural concerns (unspecified in the minutes), this resolution was tabled.

Later the same day, the AHA Council concurred with the business meeting’s actions on the first resolution, but not on the second, asserting that “the resolution dictated a particular historical approach to teaching and research.” In accordance with organizational procedures, the AHA then conducted a mail-in ballot of its membership, which rejected the second resolution 3,429–928 in early 1974.

The AHA’s discussions of gay issues continued in 1974–75. In December 1974, the business meeting adopted a resolution proposed by Rubini and seconded by Martin Duberman (Lehman Coll.) and Charles Shively (Boston State Coll.). This one affirmed “the right of gay historians and others to engage in the research and teaching of the history of single and gay people as well as members of all sexual minorities” and declared that “attempts by colleagues, administrators, and others designed to subvert such research and teaching are to be considered violations of academic freedom.” Once again, the Council exercised its right to “nonconcur,” which sent the resolution to a membership ballot by mail in 1975.

This resolution affirmed “the right . . . to engage in the research and teaching of the history of single and gay people."

In the AHA Newsletter, vice president Jean Joughin explained that the Council had not concurred because the resolution expressed support for a “particular group,” rather than upholding the academic freedom of all. Rubini and Duberman responded by highlighting “homophobia among colleagues and administrators who hold unfounded fears of proselytizing in the classroom” and declaring that “an explicit, clear, and singular statement of support is needed for gay historians to be able to teach the history of homosexuality.” They also emphasized “the paucity of gay history offerings throughout the country.” In another striking demonstration of AHA attitudes, 641 of 808 ballots (79 percent) supported the Council’s nonconcurrence, while 164 (20 percent) supported the meeting vote.

This was the context for the AHA Newsletter’s 10-paragraph essay by the students who called gay history unimportant. The essay’s length is noteworthy in part because the students described Rubini and Duberman’s two-paragraph resolution as a “manifesto,” but also because the newsletter’s editorial decisions yielded two paragraphs for the professors and 10 for the students.

While the membership voted against the 1974–75 resolution and there were complaints about AHA program committee discrimination against gay history panel proposals in the early 1970s, the Organization of American Historians (OAH) affirmed in 1975 “the right of historians and others to engage in research and teaching of the history of members of all sexual minorities.” The resolution also declared that “attempts by colleges, administrators and others designed to subvert such research and teaching are to be considered violations of academic freedom.” When the OAH membership was polled, the vote was 901–389 in favor. It is difficult to know whether the divergent outcomes reflected organizational differences or differences in the wording of the resolutions (the AHA one referred to “gay historians and others” while OAH referred to “historians and others”). The latter explanation is aligned with scholarship on the 1970s that suggests greater popular comfort with restrictions on racial and gender discrimination in general rather than restrictions on discrimination against people of color and women in particular.

What are we to make of these episodes? At a basic level, I am making a common type of historical argument: something thought to have happened first at one time (the late 1970s) actually occurred at a different moment (the early 1970s). We also can use the evidence presented here to consider both continuities and discontinuities between past and present. It is noteworthy to consider a period when gay rights arguments were more aligned with arguments about the rights of the unmarried than the rights of the married. Another standard practice of historians is to conclude an essay by calling for additional research—in this case, I advocate for comparative historical analysis of the sexual and gender politics of academic, disciplinary, and professional organizations. My suspicion is that historical organizations, if compared with associations of anthropologists, librarians, literary critics, and sociologists, were laggards rather than leaders, but I would be pleased to learn that I am wrong.

The AHA’s gay debates of 1973–75 have implications that extend beyond these specific issues. I sometimes conclude my classes by highlighting all the “new” subjects we have covered and then encouraging students to remain open to topics that might seem insignificant to us today but that later generations will criticize us for ignoring or marginalizing. We almost invariably will fail to do so because we cannot imagine what we cannot imagine, but who among us wants to be criticized 50 years from now for failing to appreciate the historical importance of neurotic, ugly, and unemployed gay wheelwrights?

Marc Stein is the Jamie and Phyllis Pasker Professor of History at San Francisco State University.