Historian of the Working Class 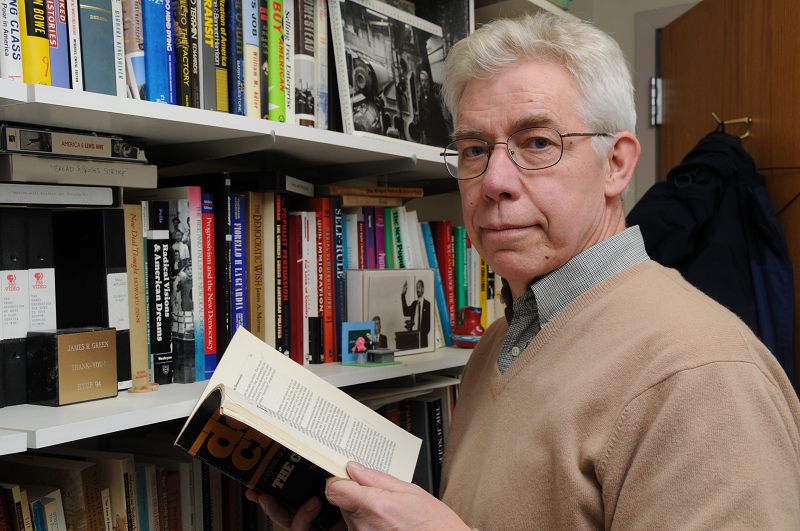 Professional historians, independent historians, and labor activists mourn the death from leukemia of James Robert Green on June 23, 2016, at age 71. Jim’s teaching, writing, and encouragement to hundreds of others interested in American working-class history leave not only lasting memories of his warmth, generosity, and love of history, but also the benefits of his many contributions.

Born in Oak Park, Illinois, in 1944, Green graduated from Northwestern University and earned a PhD at Yale, with a dissertation directed by C. Vann Woodward. Equally influential were his working-class parents and grandparents, from whom he learned pride in and respect for labor. He taught at Brandeis from 1970 to 1977 and then moved to the University of Massachusetts Boston. I had the good fortune to be his colleague there (until I left in 1984) and on the editorial collective of Radical America, a New Left journal oriented toward labor history.

Like many of his generation, Green was influenced first by the Civil Rights Movement. Then he interned with Senator Paul Douglass and worked for Eugene McCarthy’s 1968 campaign for the presidency. His research and writing were always informed by this participant-observer relation with social justice movements.

His first book, Grass-Roots Socialism: Radical Movements in the Southwest (1978), was a study of the intersection between populism and Socialism. Focusing on Oklahoma, where the Socialist Party was strongest, Green argued that it built on the radical potential of populism. The book involved him in a productive intellectual debate with Lawrence Goodwyn, published in the Radical History Review in 1980. Living in Boston during the school busing conflict intensified his concern with racism, even among working-class people, and motivated his article on the anti-busing campaign in a 1974 article in Radical America.

After Grass-Roots Socialism, Green continued to integrate race and rural workers into his studies, reflecting the influences of Woodward and David Montgomery. His 1973 article on the Brotherhood of Timber Workers in Past and Present announced this integration, examining how the union drew black and white workers together in Louisiana and Texas before World War I. The piece modeled the benefits of enlarging the context of labor history, typically focused on union leaders and the employers they challenged, to bring in a public that included farmers, peddlers, small shopkeepers, and families. The article, he wrote, “is an attempt at a new kind of labour history that places the actions of unions and employers within a larger context that will tell us something about the ways in which different kinds of American people responded to industrial capitalism.”

Green followed that plan exactly. The title of his interpretive survey The World of the Worker (1980) expresses the holistic premise of his work, and marked his commitment to working-class history as opposed to labor history and to bringing it to the public as well as to academia. He began studying coal mining in Kentucky and West Virginia, becoming a labor journalist as well as a historian, and his work gave rise to two documentary films about the miners. In 1975 he taught for a year at the University of Warwick (at the Center for the Study of Social History, founded by E. P. Thompson). In the United Kingdom, he became close to the group around the History Workshop Journal, a British scholarly journal also aimed at embedding labor history in local settings and encouraging amateurs to do their own historical research—a proud British tradition that also influenced Jim.

Green’s move to a professorship at UMass Boston symbolized his commitment to outreach. There he led a college devoted to higher education for working people, and in 1981, he created a labor studies program that offered an undergraduate major and ran workshops in labor history for union members. In 1995, he founded the Labor Resource Center and its Future of Work Research Initiative (FOWRI), which conducts and disseminates labor research on workforce development. He also taught in Harvard Law School’s Trade Union Program. In 2008, he moved to the UMass Boston history department, where he directed its public history program.

In the midst of this program building, Green published two more important books. Death in the Haymarket (Pantheon, 2006) focuses not on the infamous bombing but on the 20-year struggle for an 8-hour workday that preceded it. The book reached a large audience; one online reviewer said, “You will probably be angry when you put this book down. . . . People died for an eight-hour work day.” In 2015, he distilled his intimate knowledge of coal-mining history in The Devil Is Here in These Hills: West Virginia’s Coal Miners and Their Battle for Freedom. It shows the origins of the great 1920 shootout portrayed in John Sayles’s film Matewan, and the Battle of Blair Mountain, the largest labor uprising in US history. Its vivid characters, from Mother Jones to Samuel Gompers to Eugene Debs to John L. Lewis, are worthy of a novel.

Green served as an associate editor of the scholarly journal Labor History, but in 2004 he helped organize a revolt by the entire editorial board when the publisher tried to intervene in its editorial decisions. Green became a founding member of the Labor and Working-Class History Association and served as its second president. He served on the editorial board of its journal, Labor: Studies in Working-Class History of the Americas. He was gratified by the growth and success of both of these projects.

Green summed up his own career beautifully in his book Taking History to Heart (2000), which combined autobiography and history to make an impassioned argument for why history matters to engaged citizenship.

Green is survived by his beloved wife, Janet Grogan, and their cherished son, Nicholas, and by his daughter, Amanda, from a previous marriage. Green’s papers have been donated to the University of Massachusetts Archives.