A Profusion of History Degrees in 2008 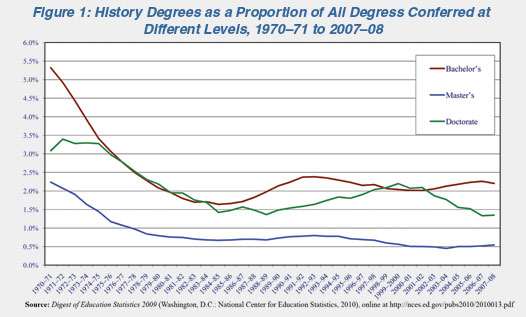 The history department at UCLA conferred the largest number of BA degrees in history by a wide margin—conferring 537 degrees as compared to the 300 degrees conferred by the University of Wisconsin–Madison, the next largest group of degree recipients. UCLA annually conferred more than 530 history bachelor’s degrees between 2005 and 2008, while the average number of degrees conferred by all history programs each year was 25.1.

At the graduate level, history programs conferred 3,403 master’s degrees in history. This represented an 8.2 percent increase from the year before, and took the number of new history MAs awarded to the highest level since 1976. George Mason University continues to confer the largest number of degrees from a traditional history department, but it is being surpassed by programs that use less traditional online and correspondence methods.

The University of Chicago conferred the largest number of history doctoral degrees (40) in 2008, following two years in which Harvard held that distinction. Over the past five years, the average number of degrees conferred per program has declined from 6.8 to 5.5 per year.

While the number of new PhDs conferred remains quite high relative to the number of academic jobs available, there is evidence that the numbers are entering into a healthier balance for a normal academic job market. Thanks to the elevated number of undergraduate students earning history degrees, there are now 2.5 doctorates conferred for every 100 students earning undergraduate degrees in the field. This is actually much better than in the 1990s, when the ratio was above 4 doctorates for every 100 students. That is small comfort, however, as we wait for a return to some sense of normalcy in the employment picture for higher education, but it does indicate that PhD-granting departments responded sensibly to the job crisis of the 1990s by curtailing student admissions to their programs.

Among all disciplines, the ratio of doctorates to undergraduates has been fairly steady at around 4 percent, but this includes a number of disciplines that have significant job markets outside of academia. Until history departments develop similar tracks for employment outside of academia (in fields such as public history), they should consider this ratio of doctorates to undergraduates in the discipline when determining their admissions of new students into their programs and work to keep the ratio relatively low.

The federal data also allow us to look at broad trends in the racial and gender makeup of the students earning degrees, and show diverging trends on diversity.

In 2008, women comprised 41 percent of the new bachelor’s degrees in history. Not only did this signify a slight decrease from 41.3 percent the year before, but it was also the lowest level in a decade. At the same time, the representation of racial and ethnic minorities fell slightly—to 16.8 percent of the new degree recipients (from 16.9 percent in 2007).

There are some marked differences within particular racial and ethnic groups that bear closer scrutiny as departments consider strategies for increasing diversity in their student population. Most notably, the data show, students from racial and ethnic minorities are significantly more likely to be women. Women were a majority (53.5 percent) among African American students earning undergraduate degrees in history, and a near majority (47.7 percent) among Asian American students (Figure 2). In comparison, among white, non-Hispanic degree recipients, women comprised slightly less than 40 percent of the new degree recipients. 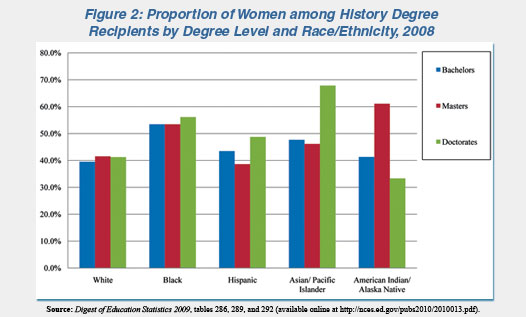