A Profile of the History Profession, 2010

This is the first of three articles on findings from the spring 2010 survey of research and teaching practices. Discussion of these findings will be a part of the session “What’s Next? Patterns and Practices in History in Print and Online,” scheduled for Saturday afternoon at the January 2011 annual meeting in Boston.

A new AHA study of faculty in history departments shows a discipline often divided by the resources and cultures of the departments that employ them. The responses indicate that faculty in departments that only confer baccalaureate degrees are more likely to remain at the institution that first hired them and identify more closely with their teaching duties, while their counterparts at doctoral programs tend to be more research oriented and more prolific with publications. Not surprising, perhaps, but a useful quantitative measure of perceptions that are too often left to anecdote and conjecture.

The responses show wide variations in the academic careers of historians, most notably a significant amount of professional mobility. From past analyses of hiring (based on data in the Directory), we know it generally takes about two years to find a tenure-track job. Even allowing for that, however, it appears that over 60 percent of historians will change employers at least once over the course of their careers. 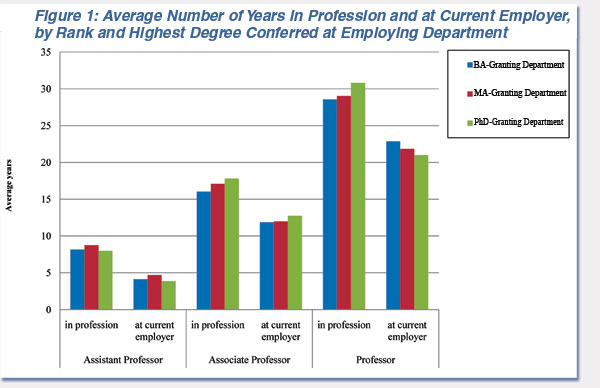 At every rank there were wide variations between the longest and shortest tenures at each rank, as even some respondents at the assistant professor level reported that they had been employed in higher education for two decades or more, while a few associate professors reported achieving that rank within five years of entering the profession.

After allowing for a two-year time window to land the first tenure-track job, it appears that most of the shifting between institutions most often occurs after the first 10 years of a historian’s career (presumably after a faculty member receives, or fails to receive, tenure). Among faculty who had been in the discipline for less than 10 years, almost 70 percent remained at institutions that hired them within the first two years after their degrees. In comparison, just 40 percent of the faculty who had been in the discipline for 10 to 15 years reported employment at the same institution, and that fell to barely a quarter of the faculty employed in the discipline for 20 years or more.

This undoubtedly flattens a number of important distinctions in the job market opportunities for historians over the past 50 years, but it does provide a general measure of the mobility historians have experienced in their careers.

The responses to the survey also showed significant differences in the publication rates of faculty at different types of departments, which flowed from wide variations in the balance between research and teaching and institutional support for research. Among faculty in departments that place an emphasis on teaching undergraduates (and only confer the baccalaureate degree), 42 percent of the faculty had not published a monograph. That compares to 16 percent at programs that confer the doctoral degree (Figure 2). 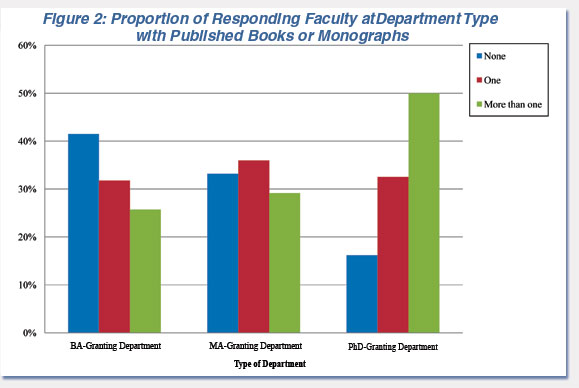 There was notably less variation in the publication of articles at the different types of departments. More than 75 percent of the faculty at all department types had published at least one peer-reviewed journal article within 10 years of entering the discipline, and almost 90 percent had published an article between 10 and 20 years after their first employment.

Faculty at doctoral programs published slightly more articles than their counterparts at other departments, but the differences were comparatively small. After 20 years in the discipline, more than two-thirds of the responding faculty reported they had published at least six peer-reviewed articles—50 percent of the faculty at baccalaureate departments had reached that threshold as compared to 72 percent at doctoral programs.

The Value of Teaching

While publication tends to be privileged for the assessment of scholarly merit in the discipline overall, the survey shows that teaching is still highly valued at a personal level. When asked whether they identified themselves as teachers or researchers, 44 percent of the respondents said they consider themselves to be about equally researchers and teachers, and another 32 percent identified more as teachers than as researchers. Only 23 percent of the respondents described themselves more as researchers than teachers.

Once again, the widest variation on this question came on the type of employing department (Figure 3). Among faculty in doctoral programs, 35 percent identified as more researcher than teacher (notably, still not a plurality of the responses), while 56 percent of the faculty at departments conferring only the bachelor’s degree said they identified as more teacher than researcher. 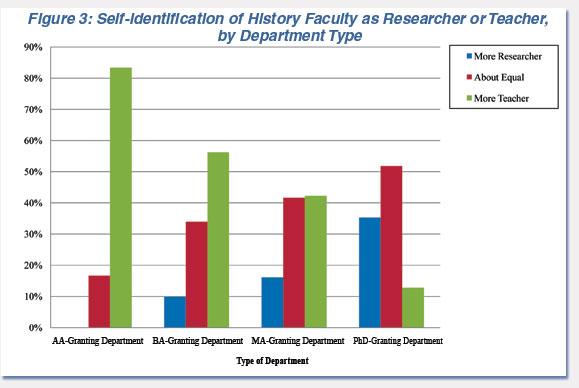 In comparison there was remarkably little variation on other metrics such as age, rank, and gender. The only notable exception was among faculty at doctoral institutions, where historians over the age of 45 were more likely to identify as teachers than researchers than their younger counterparts. Over 40 percent of the faculty members under the age of 45 at doctoral departments considered themselves primarily researchers, while just 32 percent of the faculty over the age of 45 percent emphasized research. And the older a respondent was, the greater the tendency to identify as a teacher. There was no similar variation at other types of departments. 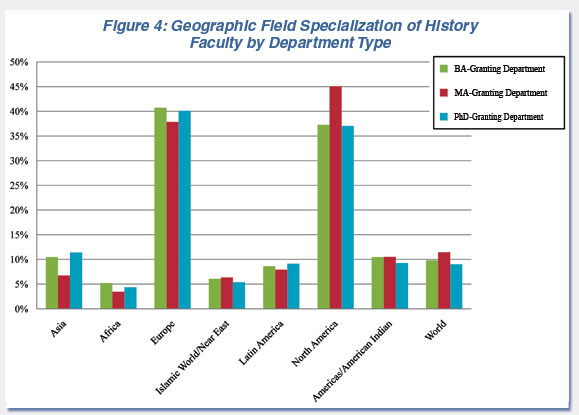 Specialists in the history of North American and Europe were the least likely to select more than one subject field, as only 29 percent of respondents who selected each field indicated a second specialty. Among the other geographic fields, however, as many as a half or more had selected an additional field. The most common multi-field alignment was between European and world history, which was selected by 209 respondents (almost 5 percent of the total). Another 189 respondents indicated a specialization in both Europe and North America.

In the next two issues we will delve more deeply into the actual practices of research and teaching, with an eye toward the impact new media and technology have had in the discipline. The second article, which will appear in the November issue, will explore the way historians’ research and writing habits differ across the various demographics described above. The third article, appearing in the December issue, will take up changes in the classroom.