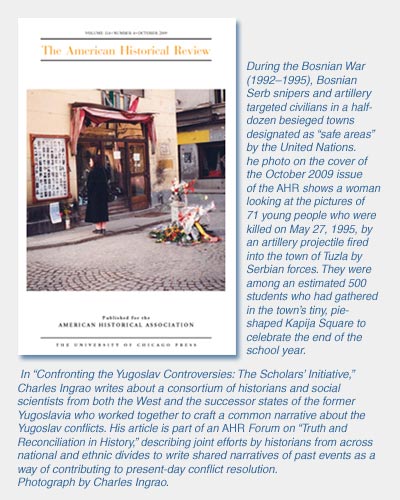 The October 2009 issue of the American Historical Review should soon be in members’ mailboxes (and will thereafter be available online as well). It contains two forums, one entitled “Truth and Reconciliation in History” and the other, “Taylor Branch’s America during the King Years.” There is also our usual extensive book review section. In addition, readers will discover something new: following “In this Issue,” we introduce “In Back Issues,” an attempt to draw attention to our extensive inventory of articles by taking a look at what was in the AHR 100, 50, and 25 years ago.

The forum “Truth and Reconciliation in History” deals with a global experience that both calls history into question and calls upon the participation of historians. Especially since the creation of the Truth and Reconciliation Commission in South Africa in 1995, after the ending of apartheid, several nations and groups have attempted to confront and possibly come to terms with their fractious and traumatic pasts. This forum offers three examples of how historians have played a role in these attempts. Elazar Barkan introduces the forum with his essay, “Historians and Historical Reconciliation,” in which he surveys the role historians have played “to promote reconciliation through collaborative work to produce a shared history.” The following three articles offer case studies of this process at work. The Polish-Jewish experience during World War II is examined by David Engel, in “On Reconciling the Histories of Two Chosen Peoples.” In “Truth in Telling: Reconciling Realities in the Genocide of the Ottoman Armenians,” Ronald Grigor Suny delves into initiatives by Turkish, Armenian, and other scholars to reach some common understanding of the ethnic conflicts in the early part of the 20th century. And Charles Ingrao’s “Confronting Yugoslav Controversies: The Scholars Initiative” gives an account of the ongoing efforts of a whole range of scholars, both from the Balkans and outside that region, to fashion a single narrative of the crimes and misdeeds committed in the former Yugoslavia. The comment is by James Campbell whose essay, “Settling Accounts? An Americanist Perspective on Historical Reconciliation,” not only reflects on these three cases but also offers a commentary on the reconciliation process from the perspective of someone with experience in American attempts to deal with its own problematic past. As Barkan notes in his introductory essay, the participation of historians in these kinds of projects is one example of how scholarship, often assumed to be irrelevant to social problems and relegated to the ivory tower, can play a crucial role on the public stage.

The second forum in this issue looks back upon a notable achievement in the writing of recent American history, America during the King Years, by Taylor Branch. The final volume of this trilogy was published in 2007. Three historians examine Branch’s contribution from different perspectives. In “Martin Luther King, Jr. and the Meaning of the 1960s,” Michael Kazin takes an appreciative look at the volumes’ interpretation of that turbulent decade, but also offers some criticism of Branch’s narrative as analytically inadequate to explain the social and political trends that defined the period. Clayborne Carson’s “The Biography Branch Might Have Written,” assesses the work from a biographical perspective, questioning whether Branch provides an accurate understanding of the deep sources of King’s actions throughout his life. Finally, Peniel Joseph, in “The Black Power Movement, Democracy, and America during the King Years,” focuses on African American militants and radicals, charging that Branch fails to acknowledge adequately the important role played by these figures both in the wider context both of American history and the civil rights movement.

With this issue we note several changes on the Board of Editors. Toby L. Ditz, Lloyd S. Kramer, Daniel Lord Smail, Eric Van Young, and Jeffrey N. Wasserstrom* are leaving the board, with our thanks for their invaluable service. Their replacements are Jane Kamensky, Jeremy Popkin, Paul Freedman, Jonathan C. Brown, and Ruth Rogaski.

The December issue will include an AHR Forum, “Transnational Perspectives on Gender and Sexuality,” and an AHR Conversation on “Historians and the Study of Material Culture.”

—Robert A. Schneider (Indiana Univ.) is the editor of the AHR

*The name was misspelled in the print version. The proofreading error is regretted.