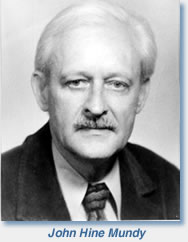 Professor of History Emeritus John Hine Mundy, a member of the Columbia University history department for 40 years and an internationally lauded medievalist, died peacefully at home on April 13, 2004. He was 86.
Mundy was born on December 29, 1917, in London. His mother, the former Clytie Hine, was an Australian-born opera singer; his father, John Mundy, a cellist. In 1921, the family emigrated to the United States. Mundy was educated in New York City at the St. Thomas School and the Trinity School. Home life was deeply musical and Anglophile. His father played cello in the Vertchamps Quartet and the CBS Radio Orchestra before becoming orchestra manager of the Metropolitan Opera. After retiring as a performer, his mother coached opera singers and musical performers. His sister, Meg, became a successful actress. Mundy was a chorister at St. Thomas and, during his last two years as a boy soprano, a soloist.

Mundy earned his bachelor's degree (1940) and master's degree in history (1941) from Columbia. He married Charlotte Williams in 1942. Drafted into the U.S. Army in 1943, he was sent to learn cryptanalysis in Virginia and shipped out to Europe the next year, serving with his U.S. Army Signal Corps unit in Normandy, Verdun, Falkenberg (Holland), along the Elbe, and Spa. In June 1945, he was sent to Shrivenham Army University in England, where he taught history to GIs. He was discharged at Christmas and returned to Columbia.

Mundy's master's thesis had examined the 13th-century Albigensian Crusade, and his adviser, the medievalist Austin P. Evans, encouraged him to write his dissertation on the social history of the Cathars of southern France and northern Italy. In 1946, Mundy returned to France, this time to research the Cathars of Toulouse, a city that would preoccupy him for the rest of his scholarly life. Looking back in 1997, Mundy noted that "research conditions were ideal for a student whose means barely sufficed to support him abroad for less than a year.” Armed with a camera borrowed from Evans and a supply of war-surplus film, Mundy offered his photographic services to archives in Toulouse and Paris in exchange for easy access to documents. "It was in those earlier years that I noted, photographed, and had photographed the bulk of what I have used ever since,” Mundy wrote.

He earned his doctorate from Columbia in 1950 and published his dissertation as Liberty and Political Power in Toulouse, 1050–1230 (New York, 1954). After a brief respite to pursue other topics, Mundy resumed his study of Toulouse in the 1960s, publishing articles on the city's university, hospitals, municipal brothels, monasteries, public charity, heretics, monks, and families. His other books on Toulouse include The Repression of Catharism at Toulouse: The Royal Diploma of 1279 (Toronto, 1985), Men and Women at Toulouse in the Age of the Cathars (Toronto, 1990) and Society and Government at Toulouse in the Age of the Cathars (Toronto, 1997), which Harvard professor Thomas Bisson described as "a lavishly detailed study of Toulousan society, family, economy, and government.” Columbia's Shepherd Professor of History Emeritus Eugene Rice described Mundy's work on Toulouse as "a telling example of the power of a 20th-century historian"when free of received ideas, fresh of eye, and disciplined by good judgment and good Latin"to recover for the present some genuine understanding of a fragment of the remoter past.”

Mundy joined the Columbia history department as an instructor in 1947, became an assistant professor in 1950, an associate professor in 1956, and full professor in 1962. He chaired the department from 1967–70, a time when student protests disrupted campus life. He also taught at Barnard, the New School, Chicago, Fordham, and Brown.

Fluent in French, German, and Latin, Mundy was highly regarded for his technical expertise. He regularly trained graduate students in paleography and diplomatics and encouraged the close reading of original documents. His only textbook, Europe in the High Middle Ages, 1150–1230 (New York, 1973), is still in print and is notable for its reliance on original sources.

Mundy was a recognized authority on many aspects of medieval life. In 1958, he contributed the historical essay to The Medieval Town (Princeton, 1958) and he returned to medieval urbanism in his 1965 Matthews Lectures at the Metropolitan Museum of Art. For many years, he taught a popular history course on the pre-industrial European city. His last Columbia class before retiring in 1991 was an impromptu lecture, with slides, on large-scale models of cities and forts (manquettes) used by early modern European city planners.

Mundy wrote essays on conciliarism, the medieval church, and religious life and taught a course on medieval political and ecclesiological thought. He edited and contributed to Essays in Medieval Life and Thought Presented in Honor of A.P. Evans (New York, 1955), contributed chapters on the Middle Ages to the series Chapters in Western Civilization and the Columbia History of the World (New York, 1972), and served as European editor of the Records of Civilization series. He lectured on love and war at the Aldeburgh Music Festival in England and was directeur d'études en Sciences Sociales at the École des Hautes Études en Sciences Sociales in Paris.

A familiar sight on the Columbia campus, Mundy stayed busy after his retirement. He completed his last three books on Toulouse, taught occasionally, and embarked on a new project at 79. His last book is scheduled for publication in England later this year.