Playing with the Past

Teaching Slavery with Board Games

We live in a golden age of board games. Every year, this multibillion-dollar industry produces thousands of new titles that feature a plethora of subjects and further develop the principles of game design. Many feature historical themes. For example, Castles of Burgundy lets players plan medieval towns; Ticket to Ride challenges them to develop networks of steam railroads; and 7 Wonders challenges them to build, well, you guessed it. 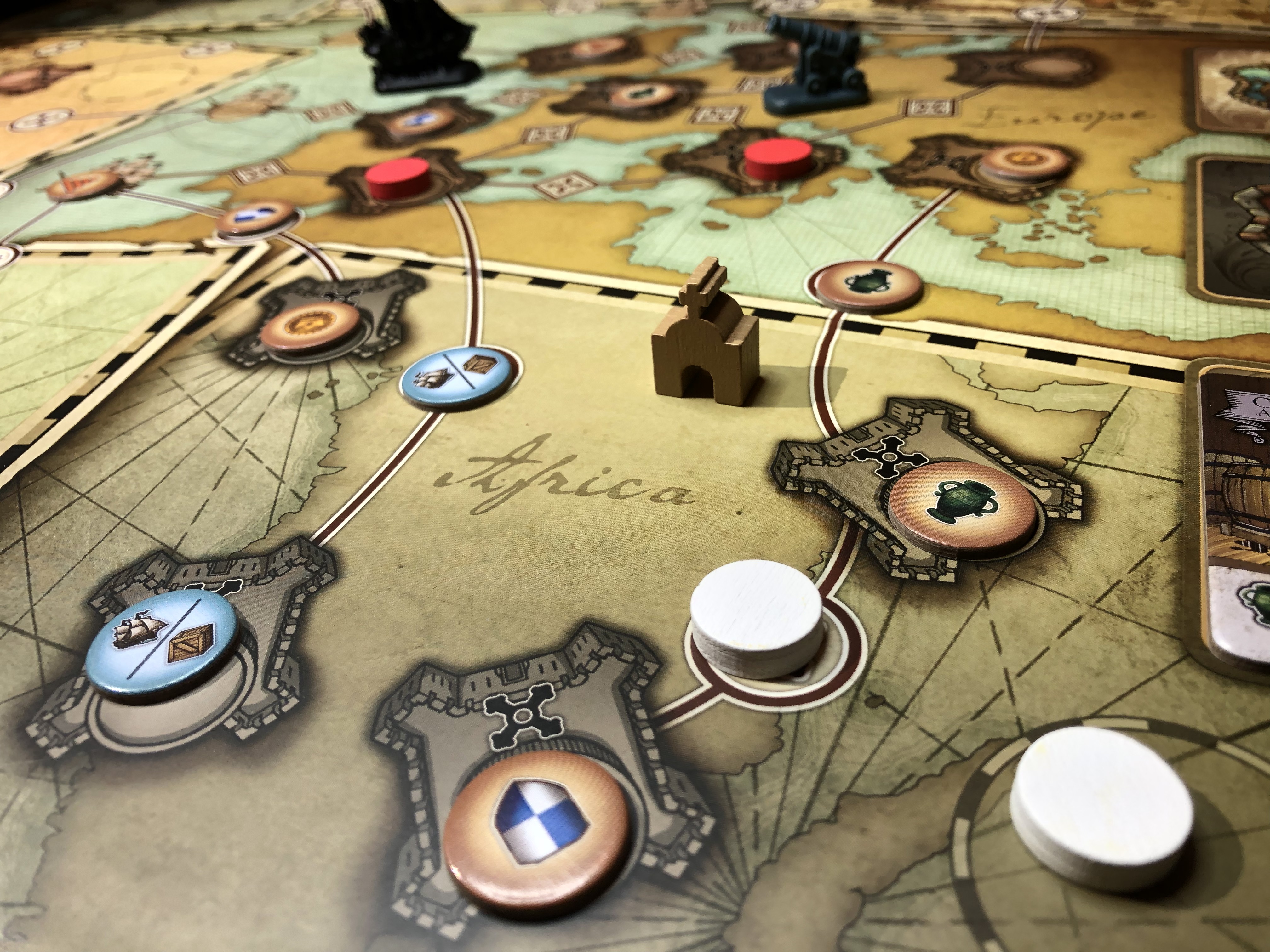 In classes on transatlantic slavery and abolition, board games can spark rich, productive discussions about Atlantic colonization. Patrick Rael

Can such games offer new ways to engage history in the college classroom? Thinking of games as representations of history may provide the key. This is the way I approach a more familiar classroom medium, historically themed films. Both media can consider the past trivially or with great seriousness. And teaching with either requires thinking not just about the past that is depicted but about how the medium of depiction itself operates.

Board games offer a range of additional benefits to students of history. On the most basic level, playing games enhances students’ fluency with historical basics—the who, what, where, and when of a particular history. On a more advanced level, games permit players to imagine changing historical outcomes. They invite discussions of counterfactuality and contingency, resisting the teleology and determinism that are so common to looking backward in time. Finally, the skills required of playing board games cover the entire range of Bloom’s taxonomy of learning, from the acquisition of trivia-like information to the metacognition associated with iterating strategies.

Games represent their subjects by combining theme, or what a game says it is about, and mechanics, or how the game is played. That Clue is a mystery game is evident from its title, graphics, and rules. It mirrors this theme in its mechanics, which direct players to search rooms and question one another. New media scholar Ian Bogost labels this unique quality of games procedural rhetoric, or the practice of using processes persuasively. Thus, games about collecting art often have auctions involved, while those about elections often require players to vote. Game artist Brenda Romero, riffing on Marshall McLuhan’s memorable phrase, proclaims that “the mechanic is the message.”

Exploring how this works in historically themed games requires some planning. Most instructors will want to experiment with one or two games per semester, selecting titles related to course learning goals and investigating connections between present and past. Dedicated game “labs” function like film screenings, ensuring ample time to play. I am careful to pick games that are short enough to learn and play in the time available but rich enough to make claims worth exploring. Supporting assignments ask students to apply primary and secondary readings to the game’s theme and to reflect on their experience of play, just as we might with films.

Games represent their subjects by combining theme, or what a game says it is about, and mechanics, or how the game is played.

For several years, I have effectively used board games in my classes on transatlantic slavery and abolition. Slavery is an inescapable feature of the popular historical game theme of European colonization, but it can be challenging to confront in class. As with studying films depicting slavery, I begin teaching these games by discussing our own relationship to the material. Where, if anywhere, do students see themselves or their histories represented in the game in question? How might this representation of slavery’s history inform today’s discussions of race and marginality? What concerns should we bring to bear in examining popular culture’s depiction of the past? Such questions remind us that while playing historically themed games is likely to teach students something about what happened and why, there may be even more pedagogical value in analyzing them as representations of the past bound by the constraints of their medium and its conventions.

Puerto Rico (2002), an iconic modern board game central to my course, enables rich, productive discussions about Atlantic colonization. In this game, players compete to grow plantation crops, which help them buy buildings that boost their plantations’ output and value. Activating plantations and buildings requires colonists, supplied each turn by ships from afar. Critics claim that the game obscures the troubled histories behind its theme. They note that enslaved people, represented by small brown tokens, are referred to as “colonists” and that it neglects the consequences of colonization for Indigenous societies. The game, designed to invoke a generic Caribbean setting, misses the island’s unique experience with slavery, as well as the monumental role sugar played in the region. Players hoping to learn much about Puerto Rico’s actual history will be disappointed. The game’s defenders argue that Puerto Rico’s plantation theme is “pasted on” to a game that never claims to faithfully simulate the history of Caribbean slavery. Its mechanics could be ported to a wide range of historical or imaginary realms.

Instead of thinking of this game as a history teacher, my students and I approach it for its significance in the present moment. While thinking about what it means to depict European colonization without slavery, we reflect on how values have changed to consider anew the neglected histories of the marginal. Where else in our entertainment culture do we see similar work of contesting memory? As an instance of historical representation, Puerto Rico raises many questions for classroom consideration, all enriched by understanding the island’s actual history.

Games seeking more accurate representations of the colonial past depict slavery directly. In Struggle of Empires (2004, 2020), in which players represent European powers expanding their colonial influence, practicing slavery makes some colonies cheaper to claim, but practicing slavery alone cannot win the game. Other games tempt players to engage in slavery by offering early benefits only to punish the practice as the game progresses. In Colonial: Europe’s Empires Overseas (2011), enslaved people are treated as a “cheap” resource early in the game, but once one player’s economy develops sufficiently, those who trade slaves suffer diplomatic penalties, making it harder to wage war. In Endeavor: Age of Sail (2009, 2018), enslaved people likewise begin early in the game as a cheap asset that is lost when a specific economic threshold is reached. The game penalizes slavery’s practitioners with negative points at game end.

There may be even more pedagogical value in analyzing games as representations of the past.

In tempting players to engage in slavery, the mechanics of these games offer an argument that combines two interpretations of abolition. On the one hand, they deliver a structural narrative of slavery’s end: the practice fueled European expansion only to be rendered obsolete by the economic development it helped create. At the same time, in punishing the use of slavery, the games mirror the moral perspective of the abolitionists themselves, who argued that their successful diffusion of new values swelled “the torrent which swept away the slave trade.” In discussions after we play, students identify tensions in our own popular understandings of this history. This, in turn, prepares them to encounter the historiographical debate between Eric Williams, who stressed economic factors in ending slavery, and Seymour Drescher, who prioritized the ideological component.

This ambiguous interpretation of abolition reminds us that, like films, games convey value-laden depictions of the past. These three games relegate slavery to a marginal position in history, acknowledging it while permitting players to avoid it. Students may wonder whether this oblique approach sufficiently confronts players with the historical reality. Slavery is incidental in these games, but it did not feel incidental to those caught in its maw. Yet neither are we likely to want games that faithfully simulate slavery’s cruelty and violence. How, then, do we begin to define our values about how games should or should not represent difficult moments in our past? As is so often the case in classroom discussions involving subject experience, reaching definitive conclusions may be less essential than clearly defining the nature and range of our concerns.

Freedom: The Underground Railroad (2012) avoids some of these problem by asking players not to practice slavery but to undermine it. Assuming avatars as Black activists and white abolitionists, players work together to help enslaved people flee from the US South to Canada, all the while encountering historical events and raising money. The game’s cooperative mechanics, which require players to work together against the game system, make a powerful argument about the challenges of collective action in social movements. Yet at the same time, enslaved people, represented by cubes, enjoy no agency, becoming literal pawns in the hands of their benevolent allies. Unlike the previous examples, Freedom was intended for classroom use. The game’s publisher even offers a teacher’s manual to help facilitate its use in educational spaces.

From Puerto Rico, which depends on slave-grown crops but never mentions slavery, to Freedom, which lets players fight against it, these titles illustrate a range of ways board games can engage the history of slavery. This happens not simply through historical themes announced on boxes, boards, and bits but also through the messages delivered through their mechanics. Games, like all media, deliver their interpretations through their form as much as through their content. Understanding both hones our students’ capacity to critically encounter the history that is so pervasively represented in popular culture.

Patrick Rael is professor of history at Bowdoin College.