In the late 1960s, professional academic associations found their annual meetings disrupted from the usual activities of staid paper presentations, job interviews, informal conversations over drinks or dinners, and “smokers,” gatherings of cigarette, cigar, and pipe aficionados enjoying tobacco and lively conversations. American campuses experienced much upset in this period, beginning with the Free Speech Movement at the University of California, Berkeley, in 1964, the 1968 occupation of the Columbia University campus, and followed by demonstrations, injuries, and deaths on other campuses. Professional associations, including the AHA, felt these tensions as well and responded at their annual meetings with vociferous debate involving the participation of many members. The business meetings, traditionally ignored by much of the membership, commanded attention as members sought support for statements condemning racial discrimination, US involvement in Vietnam, and the limited opportunities for women in academia. 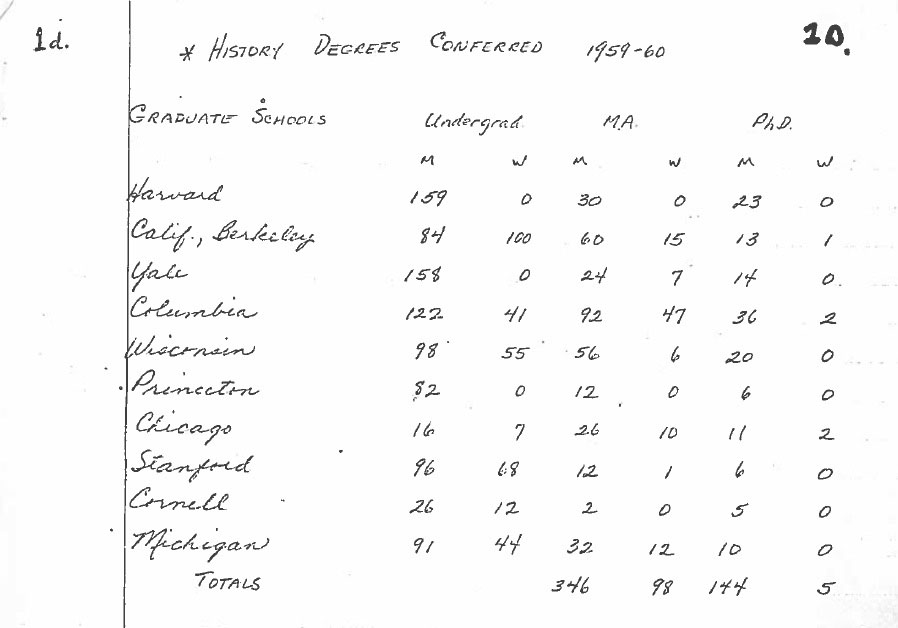 The 1970 Rose Report included statistics on the number of history PhDs granted to women. AHA Archives

In 1969, the AHA Council received a petition from the Coordinating Committee on Women in the Historical Profession, protesting discrimination against women in academia. Surveys revealed the paucity of women teaching in US history departments, particularly in prestigious colleges and universities.

In response, the AHA organized a Committee on the Status of Women in late 1969. Willie Lee Rose (Johns Hopkins Univ.) served as chair of the initial committee, and its members included Hanna Holborn Gray (Univ. of Chicago), Carl Schorske (Princeton Univ.), Page Smith (Univ. of California, Santa Cruz), and me, Patricia Albjerg Graham (Barnard Coll., Columbia Univ.), as a replacement for Mary Wright (Yale Univ.), who was ill with cancer. The committee reported our findings with a document for the membership released on November 9, 1970, and presented to the December 1970 annual meeting in Boston. The report became widely known as the “Rose Report,” named for the chair of the committee.

The committee compiled statistics on the granting of PhDs to women and the hiring of these women in history departments. Women had constituted one-third to nearly half of undergraduates from 1920 to 1940 and nearly 20 percent of doctorates. Their fraction dropped dramatically after World War II, when the GI Bill made a postsecondary education available to military veterans, most of whom were men. In the 1950s and 1960s, women were about a third of undergraduates (today they are a majority) and received just over 10 percent of doctorates (today over 50 percent). The 1920s and 1930s, when PhD cohorts were small, provided opportunities for women to find teaching jobs, principally in small colleges, but virtually none on the professorial track in leading research universities. Less than half of these women faculty ever married. The fraction of women history PhDs declined dramatically from a high of 22 percent in the 1920s to a low of 9 to 11 percent in the 1950s and 1960s, before jumping to 16 percent in the 1970s.

History departments in liberal arts colleges and women’s colleges hired women as faculty in the 1920s and 1930s and promoted some of them, as did some state universities. Major research universities did not. When women full professors began retiring in the 1950s and 1960s, their junior replacements were mostly men. The academic boom years of the late 1950s and 1960s brought unprecedented numbers of new faculty, nearly all men, to burgeoning and rapidly growing colleges and universities. However, the academic recession began in the 1970s, when jobs in history, and in the humanities more broadly, shrank just as women substantially increased their numbers in the PhD pool.

The committee compiled statistics on the granting of PhDs to women and the hiring of these women in history departments.

Research universities, which had been granting doctorates in history to women since the beginning of the 20th century, were not hiring their women students. Of the top 10 university departments in 1959–60, there were no women among 160 full professors. A decade later, these departments had a total of 272 full professors, of whom only two were women—Mary Wright (Yale) and Sylvia Thrupp (Univ. of Michigan). When universities did hire women, they often specialized outside of the most popular fields, American and European history. Rather, they were in less populous fields where perhaps they were more visible, such as Chinese history (Wright), medieval Europe (Thrupp), and Armenian and Byzantine history (Nina Garsoïan at Columbia and Angeliki Laiou at Harvard). To a considerable degree, these universities set the tone for the acceptability of women in faculty ranks.

When the committee prepared its report in 1970, we did not recognize that the dramatic decline in the proportion of women receiving doctorates coincided with the expansion of major history departments. Nor did we foresee that the increase in women historians would occur when history departments were no longer expanding and even contracting. This did not make future secure faculty appointments in history easy for women or for men.

The natural evolution of such an ad hoc committee was the AHA Council’s creation of a standing Committee on Women in the AHA, and I became its chair. Willie Lee Rose, who would have been an appropriate and excellent chair, had suffered a stroke and was not available to be considered for this position. Among its key members were Linda K. Kerber (Univ. of Iowa, appointed after the death of Adrienne Koch) and Jane Sherron De Hart (Univ. of California, Santa Barbara), both of whom subsequently served as committee chair. This committee continues today as the Committee on Gender Equity.

Undoubtedly, the most important initial activity of the new committee was to part company with the tactics of other professional associations. The predominant model was principally to raise issues about discrimination against women at annual meetings, but the results were generally negligible. Our committee, however, took another approach: hiring an Association staff member who would work specifically on women’s issues, assuring women’s participation in AHA activities, including committees and the annual meeting, and giving women historians and their work added visibility. The Council agreed to this approach, and for the role the Committee recruited Dorothy Ross, a recent Columbia PhD who had two children and a husband tied to a career in Washington, DC. Ross followed her AHA appointment with a distinguished academic career, and she laid the groundwork for the long-term service of Noralee Frankel in this role.

Supplementing and nudging the work of the AHA Committee on the Status of Women were many informal groups of women historians around the country—some employed and others not; some single, some in relationships; some with children, some childless; but all dedicated to the study of history and intending to pursue it professionally. It seemed very difficult to do so since most of their male colleagues in those early days easily found jobs, and many of the women did not.

While 3.9 percent of participants at the 1969 AHA annual meeting were women, in 2020 women made up 52 percent of presenters.

My own participation in these activities was powerfully stimulated and influenced by a small group in New York City who met regularly in the 1960s and early 1970s. Many had been graduate students at Columbia, and all of us were struggling to find and keep jobs that were related to what we had studied. Several were part of the emerging network of the Coordinating Committee on Women Historians, which was a powerful stimulus to the AHA in taking women’s issues seriously. We met regularly but informally in each other’s apartments, to celebrate our successes—jobs, tenure, promotion, publications—and more often to console when an anticipated appointment went to a man, tenure was denied, or a manuscript was rejected. Many, but not all, of us were interested in women’s history, but we were all wrestling with what it meant to be a professional historian in a field dominated by men. We ranged in age, from Gerda Lerner to Rosalind Rosenberg. Our ranks included Americanists and Europeanists, like Joan Kelly, Renate Blumenthal, and Sandi Cooper. We also ranged in disposition from assertive activists to moderate progressives. This was a lively lot, and the AHA’s Committee on Gender Equity owes these groups around the country a great deal for helping to define and ameliorate the circumstances that limited women’s opportunities in the historical discipline.

Since the committee’s work in 1970, these issues have changed. In the 1980s, approximately 33 percent of history PhDs were awarded to women. In recent years, women have earned slightly less than half of the PhDs granted in history. While 3.9 percent of participants at the 1969 AHA annual meeting were women, in 2020 women made up 52 percent of presenters. However, the academic market for PhDs in history has shrunk considerably from the open employment opportunities in the bulge years of the 1960s and 1970s. Some women historians have risen dramatically in academic positions, notably Hanna Holborn Gray as University of Chicago president and Drew Gilpin Faust as Harvard University president. Most history departments now include women faculty, though they are often concentrated in non-tenured ranks. The realities of a shrinking job market, reduced enrollments, and an emphasis on more technical subjects means that many women PhDs have been forced into part-time and “off-ladder” appointments in academic institutions. Others have sought out work outside higher education with varied success.

In 1970, the Rose Report addressed the issue of women scholars’ exclusion from history departments. Today, most history departments include women faculty. In that sense, the Rose Report’s agenda has been substantially fulfilled. However, in 2020, the issues are quite different. The role of historical understanding among our citizenry is at risk. The very existence of vibrant history departments and curriculum is threatened as colleges and universities shrink their liberal arts curriculum. Many who are prepared as historians will find employment in other venues. Nonetheless, for all of us historians, the challenge is to become more convincing that a historical perspective is a necessary element of an educated person. We need to provide it.

Patricia Albjerg Graham is Charles Warren Professor of the History of Education Emerita at Harvard University.