Left Behind? Historians Lag in the 2006-07 Salary Report

According to the College and University Personnel Association–Human Resources (CUPA–HR), there was only a small gap between the average salaries for historians at private and public colleges and universities. Historians at private institutions earned an average of $60,341, as compared to $58,861 for history faculty at public colleges and universities. (Table 1)1

Unfortunately CUPA–HR re-based their survey data this year, so we cannot track the year-to-year trend in salaries for the discipline. But this report still allows us to compare history to other disciplines at public and private institutions.

As reported in recent years, the largest gap between history salaries and the rest of academia occurs at the bottom rungs of the profession. The average salaries for new assistant professors (those hired to the rank in the fall 2006 term) fell 14.2 percent below the average for the other disciplines. In history assistant professors earned $47,145; in all other fields except the health sciences they earned $54,956.

This gap in average entry-level salaries only emerged about 15 years ago, just as the academic job market turned sour for history PhDs. As the new entry-level assistant professors of 15 years ago were promoted into higher-level positions, average salaries for the field fell below the average for all fields about a decade ago and have continued to decline.

If the comparison between history and the disciplines of the humanities is not disturbing enough, the relationship to salaries in the social science disciplines is even more troubling. The average salary for faculty in the social sciences is $64,435—7.5 percent higher than history. When I first started writing about the salary surveys about a dozen years ago, history could be compared favorably to the other social sciences; but we fell behind them in 1997–98 and have been losing ground ever since.

Beyond the broad averages, the report indicates a sharp difference between the top and bottom levels of the profession. The lowest-paid history instructor earned just about one-eighth the salary of the highest- paid professor in the discipline—though this is narrower than in recent reports, when the highest salary was almost 12 times the lowest.

Signs of Improvement in Junior Hirings

Since the CUPA-HR report separates out the new hires from the rest of the faculty, we can also look at the data for information on the state of the job market. And the news on that score is much more positive than the salary data, as more than a third of the 695 reporting departments indicated hiring at least one new assistant professor for the fall 2006 term. 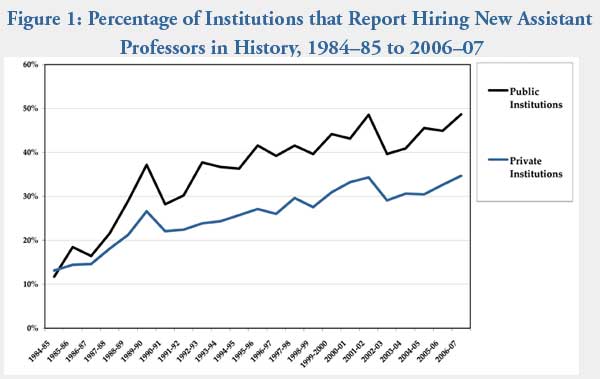 In comparison, only a quarter of the private colleges and universities reported a new hire last year, as 97 of the 399 private institutions reported hiring 120 new assistant professors. But because private colleges and universities have much smaller departments on average, these figures are in line with past trends (and were exceeded only in the 2000–01 academic year).

The CUPA–HR data thus indicate continued growth in the number of full-time faculty employed by departments, but within that growth there is a marked transformation in the composition of the departments. Twenty years ago CUPA–HR singled out history departments as tending to be unusually top-heavy with more faculty at full professor rank. But this past year the proportion of assistant professors exceeded the proportion of full professors in history departments for the first time since CUPA–HR started tracking this information (Figure 2). This may be a mixed blessing. While new job opportunities for junior faculty may open up, the loss in the proportion of senior faculty may reduce the number of faculty in a position to advocate equitable salaries for the discipline. 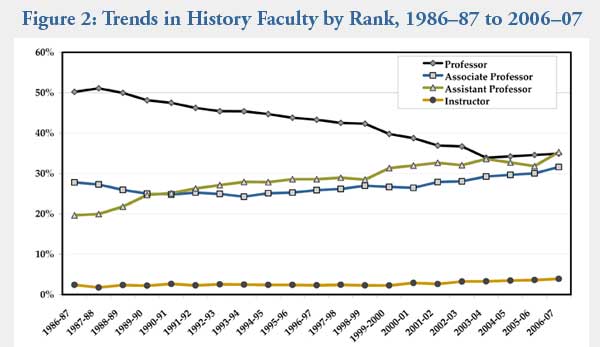 1. CUPA–HR, National Faculty Salary Survey by Discipline and Rank in Four-Year Colleges and Universities for the 2006–07 Academic Year (Washington, D.C.: CUPA–HR, 2007). Salary figures are based on a nine- or ten-month academic year, full-time faculty only. Fringe benefits and summer earnings are excluded. Copies can be obtained from CUPA–HR at 1233 20th St. NW, Ste. 301, Washington, DC 20036-1250 or through the web site at www.cupahr.org/.