The June 2022 issue of the American Historical Review examines questions of empire, race, family, and knowledge production along with the nature of contemporary historical practice. As part of this focus, the AHR History Lab features the opening intervention of a collective project, Monuments and Engaged History, that brings together historians, curators, artists, architects, community activists, and writers to think through questions of history and memory. Over time, the project will examine sites of commemoration in New Orleans, Okinawa, London, Delhi, Warsaw, and Chicago and involve multimedia content, including the AHR’s first graphic novella. The initial installment of the project, “Toward an Archival Reckoning,” foregrounds the Blackivists, a collective of Black archivists who prioritize the preservation of Black cultural heritage and memory. Compiled by Ashley Farmer (Univ. of Texas at Austin), this three-part collaborative essay includes a conversation with Blackivist members about the challenges and possibilities of the profession and archiving, a case study on their collaboration with the Chicago-based collective Honey Pot Performance, and a Blackivist call to action addressing some of the most pressing issues in archiving and historical preservation today. 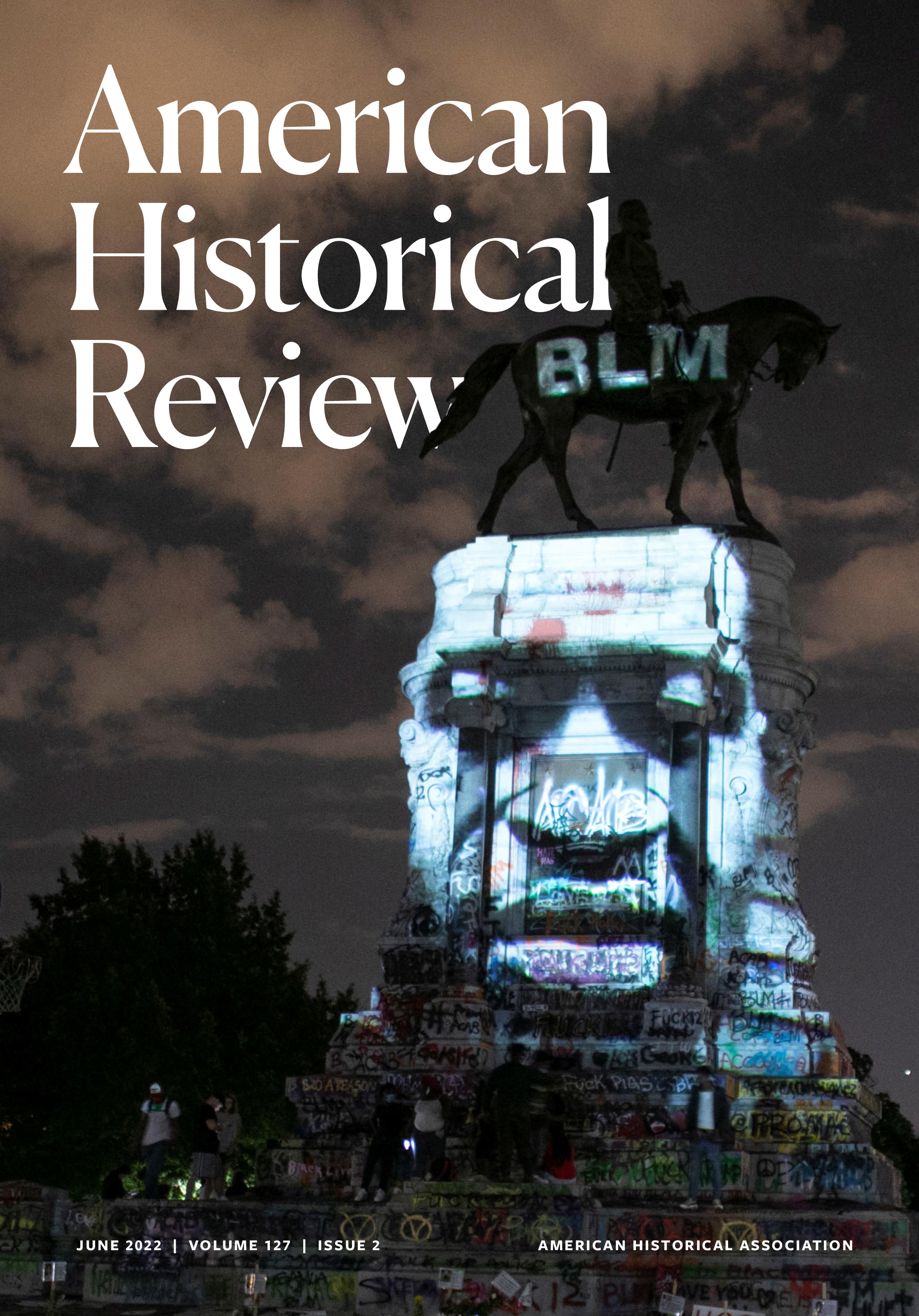 Artist Dustin Klein projects an image of George Floyd onto the statue of Confederate general Robert E. Lee in Richmond, Virginia, on June 18, 2020. Klein also projected the images of notable Black figures, including Martin Luther King Jr., Harriet Tubman, Billie Holiday, and W. E. B. DuBois, onto the statue in what he said was an effort to reclaim the meanings of the space. Later in June, Governor Ralph Northam ordered the Lee statue’s removal. The monument’s defenders went to court to prevent its removal, but their case was dismissed in September 2021 and the statue was removed on September 8. The pedestal with Black Lives Matter slogans and graffiti stayed in place until the end of the 2021, before also being removed. Photo courtesy of Reuters.

The AHR History Lab also features the return of Odeuropa and History Unclassified. In the second installment of their lab project on historical smells, Odeuropa contributors present a smellscape from their research in multiple forms, from thick-description, organic chemistry compound diagrams to a computer-generated synthetic “recipe” and a scratch-and-sniff card. History Unclassified includes two essays on writing family histories. Martha Hodes (New York Univ.), in “As If I Weren’t There: Writing from a Child’s Memory,” reflects on the dilemmas she faced writing a deeply researched memoir of a childhood event. A complementary article by Kendra Field (Tufts Univ.), “The Privilege of Family History,” compares the author’s own efforts to write family history with the challenges met by African American historians throughout the 20th century, and describes what family history can offer in the face of racialized archival silences.

The theme of family likewise informs the featured reviews in the June issue, which focus on memoirs by such historians as Mark Mazower, Sheila Fitzpatrick, and Claudio Lomnitz, and a reappraisal of a recently translated classic work by Chinese historian Ying-shih Yü.

Histories of empire hover over the articles in the June issue.

Histories of empire hover over the articles in the June issue. Two articles describe the processes through which empire is constituted. Michael Thornton (Yale Univ.), in “A Capitol Orchard: Botanical Networks and the Creation of a Japanese ‘Neo-Europe,’” situates ethnic Japanese colonization of Hokkaido and its Indigenous Ainu population in the broader global wave of 19th-century settler colonialism as a form of ecological imperialism. For Japanese colonial authorities, Thornton argues, Hokkaido’s capital, Sapporo, served as a colonial laboratory, importing ideas from Japan and abroad to build what became one of the nation’s most important breadbaskets. That knowledge was later exported to Japan’s colonies in East Asia. In “Base Money: U.S. Military Payment Certificates and the Transpacific Sexual Economies of the Korean War, 1950–1953,” Jeong Min Kim (Univ. of Manitoba) discusses how US military payment notes became a commonly used local currency during the Korean War, fueling an economy of illicit and informal transactions. Kim demonstrates that as soldiers, goods, and money moved through the US base network across Korea and Japan during the war, these notes were commonly used as a medium of exchange for sexual transactions between US soldiers and local women in ways that became entangled with US military expansion abroad.

A second set of articles examines global histories of gender, empire, and slavery. Megan Robb’s (Univ. of Pennsylvania) “Becoming Elizabeth: The Transformation of a Bihari Mughal into an English Lady, 1758–1822” examines the life of an Indian woman who lived and had children with a British East India Company supervisor. She would later follow him to Britain, change her name, and convert to Christianity. Robb uses material evidence from a family archive, including paintings, jewelry, textiles, and a penmanship book, to explore the embodied processes of anglicization in this imperial context. Diana Paton (Univ. of Edinburgh) unites global and gender history in the study of Atlantic slavery in “Global History, Gender History, and Atlantic Slavery: On Racial Capitalism and Social Reproduction.” Tracing the enduring impact of Roman law in shaping ideas about slavery in the Iberian Peninsula, then the Spanish empire, and finally across the French and British empires, she argues that the cultural understanding of inherited slave status in the Americas was grounded in broader European ideas that subordinated all women, compounding the exploitation of women’s reproductive work on which the generational reproduction of Atlantic slavery depended.

New episodes of History in Focus include discussions with authors and a more detailed look at the Monuments and Engaged History project.

Three articles explore colonial and postcolonial knowledge production. In “Linga’s Dream? Interpreters, Entextualization, and Knowledge Production in Central Africa,” Philip Janzen (Univ. of Florida) focuses on a young farmer named Linga and his encounter with a water spirit in Oubangui-Chari (present-day Central African Republic) in 1930. Janzen considers the telling and retelling of Linga’s encounter as the story was transcribed into Banda, translated into French, and rewritten as an ethnographic folktale, exploring how colonial intermediaries used transcription and translation and offering new methods for mapping otherwise invisible constellations of language, meaning, and colonial power. Leslie James (Queen Mary Univ. of London) argues in “Fascism Disguised: Colonialism and Fascism as Relation in the Interwar Caribbean and West Africa” that fascism became a critical subject of intellectual debate in British West African and Caribbean colonies in the 1930s. Tracing these debates in the pages of the anticolonial press, James points to the ways in which anticolonialism became central to the construction of antifascist thought and practice.

Finally, in “Making Disappearance Visible: The Realities of Cold War Violence,” Marco A. Ramos (Yale Univ.) approaches the question of who has the right to speak for victims who cannot speak for themselves by examining the different meanings conferred on the imprisonment, murder, and torture of thousands of people “disappeared” by Latin American regimes in the 1970s. Using a variety of evidence, from the forensic analysis of gravesites to psychological work with survivors, Ramos argues that material practices along postcolonial networks created layered realities of disappearance across time and place, emerging as a human rights violation in Europe, then as a biomedical syndrome, and finally as a “haunting” in Argentina.

The June issue is complemented by four new episodes of History in Focus, the AHR podcast hosted by Daniel Story (Univ. of California, Santa Cruz), which include discussions with authors of its articles and featured reviews and a more detailed look at the Monuments and Engaged History project. Story offers these interviews along with more immersive storytelling and off-the-cuff banter, pulling back the curtain on the AHR and the work of history more broadly.