We Are at War

The Italian Home Front in the Fight against COVID-19

Italian authorities have likened the fight against COVID-19 to a war. An online search for “siamo in una guerra” (“we are at war”) returns thousands of results. Cities that have been particularly afflicted by the virus are considered “under attack,” Italian politicians talk of a war economy, and volunteer doctors are called in for duty with an announcement of a “task force on the front line.” 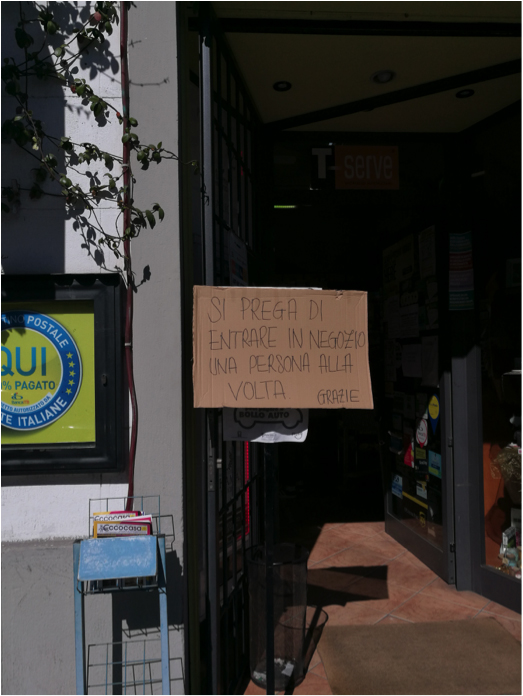 A “one person at a time” sign in front of a tabaccheria. Çiğdem Oğuz

If the fight against COVID-19 is a war and its outcome depends on civilians, then we can think of the people as constituting a home front. As a historian of the home front during the First World War, I recognize my research all around me in Italy today.

A little more than a century ago, war spread across Europe. The destruction led to the collapse of the Russian, Ottoman, Austro-Hungarian, and German empires, which had ruled vast territories for centuries. The 1918 influenza pandemic that followed killed more people than the war itself. The war brought civilians under great scrutiny; political leaders questioned how they spent their money, how they entertained themselves. The “total war” of this period contributed to a transformation in the perception of society from the masses into citizens. Likewise, the people’s perception of the state changed, with citizens expecting more support and services from their governments.

I see parallels between living on the home front during the Great War and our experiences under the current “war” against COVID-19. As I write in late March, I’ve experienced several flashbacks to my study of the First World War over the past few weeks in Tuscany. These parallels are useful, even in a different context and against an invisible enemy. The war metaphor is being used to convince people to abide by protective measures, to ask for their collaboration in preventing the virus spread, and to demand rapid preparation (at least when used by doctors). Such a comparison with the past may help us see how people in both eras adapted to the conditions of war. It also might help us to evaluate the similarities and differences in people’s basic needs and their perceptions of these needs.

I see parallels between living on the home front during the Great War and our experiences under the current “war” against COVID-19.

The first parallel I see is in people’s attitudes toward those they consider dangerous. During the First World War, the nations at war were gripped with “spy fever”—a collective anxiety about undetectable enemies within. Civilians often viewed foreigners as potential spies. During the early stages of the spread of COVID-19, some cases were reported about a similar reaction toward people from China, whom some viewed as carriers of the disease. A bar near Rome’s most popular tourist site, the Trevi Fountain, displayed a sign forbidding the entrance of Chinese tourists. In solidarity against these hostile acts, Italy’s president Sergio Mattarella paid a visit to a school attended by the children of Italo-Chinese community in early February. Over time, people have learned more about the virus and its indiscriminate spread. With mandatory one-meter social distancing and stricter social isolation, now all of us live under “virus fever.” Yet, unlike during the Great War, there is a sympathetic element to today’s fever—when people cross the pavement to keep a few meters apart, everyone recognizes that it’s for the greater social good, and not because the other person is the enemy. A century ago, it may not have been possible to deter hostility against people from China. Though blatant discrimination has been reduced, the Chinese community still feels under pressure, and thus tries to demonstrate solidarity by generous donations of masks and ventilators across Italy.

Much like during the First World War, there are now long lines in front of shops, though “panic buying”—shopping in large quantities out of fears of shortages and price rise—appears to have subsided. When the Great War broke out, no one thought it would last for years. Soldiers expected it to be over by the Christmas of 1914. Additionally, buying a lot of food requires a plan for preserving it. Refrigerators were unavailable for home use and canned food was mostly for the army.

Many accounts from the First World War describe people lining up in front of retail shops to buy essentials such as sugar, salt, and flour, which came to be known as the “three whites” after the war. Low production and lack of transportation led to a shortage of these three foods during the war. Many home front accounts tell of women spending their days going from one bakery to the next asking for bread, finding only dark bread made without white flour.

Nevertheless, the lockdowns instituted as a result of COVID-19 appear to have triggered past traumas in our society, and long queues in front of shops are now the norm. In today’s Italy, only a certain number of people can enter the supermarket at once. Some large stores have a minimum wait time of half an hour. At smaller grocery stores, only one person can enter at a time, while others wait outside. It is hard to describe the pressure on the person shopping inside (at least on me!) with so many standing outside watching. Just as people did during the First World War, we ask shops in advance about what they have in stock and what their hours are. We ask friends online to see whether they could find some items and what the best time to shop is to avoid crowds. At least in Italy, owing mostly to the use of bidets, we don’t have a toilet paper crisis like in the United States.

The lockdowns appear to have triggered past traumas in our society, and long queues in front of shops are now the norm.

As in wartime, the government has demanded a lot from its people, and the people, in return, are demanding more from their government. A century ago, people would have used petitions to communicate to the authorities. Comments on Prime Minister Giuseppe Conte’s social media accounts show that the people are as eager now to communicate with political authorities about decisions that affect their lives.

More than anything, these two home fronts share an uncertainty. Italians are staying at home and waiting for the days when we can resume our lives in this beautiful country. “War” once again invites collaboration in an attempt to take control of the situation. But though the war discourse can be useful in mobilizing society, it is also dangerous. It can legitimize all sorts of extraordinary and possibly undemocratic tendencies. It can make politicians unaccountable for the mistakes that they make. It allows austerity and cuts. Indeed, voices against this metaphor are growing based on these legitimate criticisms.

It is unlikely that “war enthusiasm,” as can be seen in the daily chanting from balconies, will last if the death toll keeps rising. Yet, seeing the solidarity among the people, I believe Italian society will overcome these difficult days, and that accounts such as this one will fade into memory. Historical perspective helps us to see how, in times of emergency, people tend to think similarly no matter how different the context. Therefore, it is always useful to examine different contexts in the past to gain a better insight about the present.

Çiğdem Oğuz received her PhD in 2018 from Bogazici University’s Atatürk Institute in modern Turkish history and Leiden University’s LIAS Turkish Studies Program. Her book Moral Crisis in the Ottoman Empire: A Social and Intellectual History of the Home Front during the First World War will be published by I. B. Tauris in 2021.