On a Sunday evening in February, the audience relaxes into old-fashioned red velvet theater seats as the lights go down. The show’s logo is projected on the back wall. The emcee and cast enter the stage, empty except for a simple podium, and over the next hour, history and improvised comedy combine for an unforgettable evening at Study Hall, the monthly comedy show hosted by the Philly Improv Theater (PHIT). 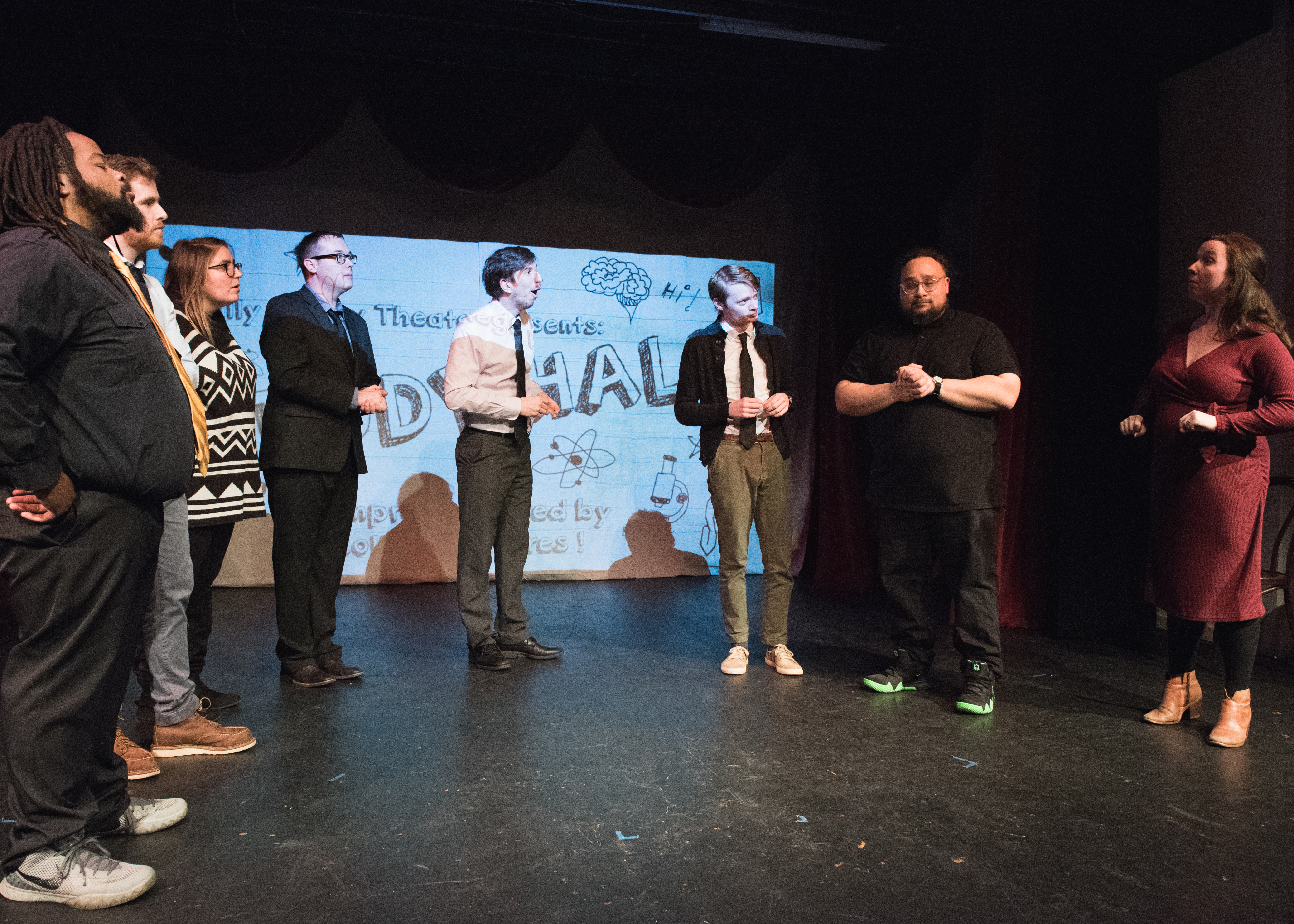 PHIT has been doing a version of these performances since 2011. They asked Michael Yudell, historian of public health and professor and chair of the Community Health and Prevention department at Drexel University’s School of Public Health, to collaborate on a comedy performance at the Philly Science Festival. He was asked to pair actors with historians to dramatize history; when he arrived at the show, he discovered that the actors were actually improv comedians. A great show followed, including a satirical performance based on the local yellow fever epidemic of 1793. Over the next three years, PHIT invited him back, and he participated in a similar performance at the local Fringe Festival in 2013. In 2014, the theater invited Yudell to be part of a regular monthly show called Study Hall.

Study Hall and the preceding festival shows are based on the Armando improv format, named for Chicago Improv teacher Armando Diaz. In this long-form game, a person performs a storytelling monologue for the audience. After the monologue, the performers improvise scenes that riff on the story.

For Yudell and PHIT artistic director Mike Marbach, also the director of Study Hall, the Armando game was a perfect way to bring together academic researchers and comedy. Marbach suggested that Yudell tell true stories from history, current events, and his own life, and over the past six years, Yudell has told more than 100 such stories on the stage.

As the show expanded, they began inviting guest lecturers. “It’s fun to have guests,” Yudell tells Perspectives.“ It brings in different historical expertise and knowledge. And it’s a unique outlet for sharing history with an audience that doesn’t necessarily pay attention to history.” Marbach agrees that Study Hall is a unique show in the theater’s schedule. “At other improv shows, you don’t learn,” Marbach says. “Or if you do, it’s by accident. The whole point of Study Hall is to educate people.”

In 2014, the theater invited Yudell to be part of a regular monthly show called Study Hall.

And educate the audience they do. At the February show, there were three monologues performed by local luminaries. WHYY host and podcaster Maiken Scott related the story of the Poison Squad. At the time, milk was watered down and whitened with chalk, and canned foods could be filled with borax or salicylic acid with no consequences. Government researcher Harvey Wiley formed a group of volunteers that, starting in 1901, tested the safety of American food. This research led directly to the passage of the Pure Food and Drug Act in 1906.

Dorothy E. Roberts, professor of law, sociology, Civil Rights, and Africana studies at the University of Pennsylvania, spoke about Dr. Samuel Cartwright, a notorious alumnus of the Penn medical school who practiced racial medicine in the antebellum South. Cartwright developed theories about illnesses that affected both enslaved and free African Americans, most famously “drapetomania,” a disorder that caused the enslaved to run away. Roberts’s lecture highlighted how the awful and racist ideas of physicians like Cartwright persist in medicine today.

Finally, Yudell contrasted the history of the tobacco smoke enema, an ineffective technique for resuscitating drowning victims and a possible etymology of the phrase “blowing smoke up your ass,” with The Goop Lab, an extension of Gwyneth Paltrow’s wellness brand on Netflix. He binged the six-episode series for the sake of comedy, laying out the specious health claims made on the show for the audience.

After each lecture, the improvisers let loose on the stage. Acting as a chef for the Poison Squad experiment, Caitlin Corkery asked if it was possible that, just this once, she could serve dinner without poisoning the meal. During a medical school interview, Keane Cobb emphasized the absurdity of racist ideas in medicine. And several cast members stood over a drowned body, arguing over who would be the one to administer that lifesaving enema. 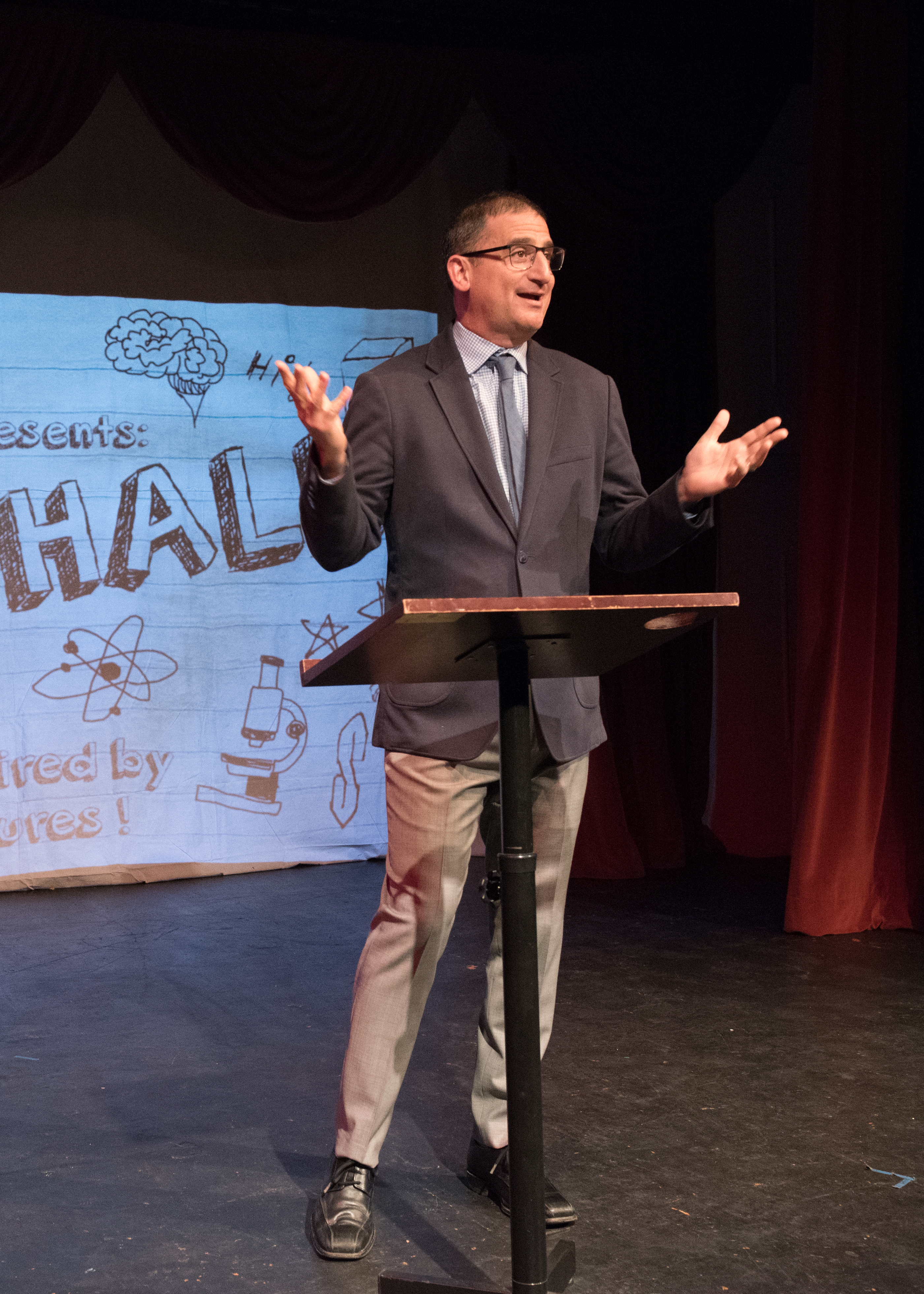 Michael Yudell started bringing historical stories to the improv stage in 2011, and has told over 100 such stories since Study Hall started in 2014. Sam Abrams Photography

The performers have a hard task. They must listen carefully to the stories, looking for points of silliness or satire they can bring to the performance. But they also must be sensitive to serious subjects. Making controversial topics funny without being offensive is a fine needle to thread. Marbach’s favorite lectures are those that make it tough on the cast, requiring them to work harder for the laughs and highlighting how good they are at what they do. When dealing with tough subjects like race, “the cast always punches up,” he says.

Historian-participants in the show confirm that the comedians handled their topics with care. Adam Rothman, historian of slavery and professor at Georgetown University, has been “increasingly interested in all of the nonacademic forms of storytelling and art that draw inspiration from history.” His response to Yudell’s invitation to participate in the show was also personal, Rothman told Perspectives: “Part of my eagerness stemmed from the fact that one of my favorite history students at Georgetown did improv comedy, and I wanted to be able to tell him that someone had found a way to combine his two passions."

But Rothman was concerned about how they would handle slavery in the show. Yudell reassured him that “they would handle whatever I gave them with intelligence and sensitivity.” During his December 2019 visit, he told the story of Henry “Box” Brown, an enslaved man who shipped himself from Richmond, Virginia, to Philadelphia—and freedom—through the mail. Rothman was thrilled with what they did with the story. “I was awestruck,” he said. The improvisers “illuminated something important in a deep and powerful, and even funny, kind of way. It was a moment of art.” Rothman hopes the troupe will visit Washington, DC, to perform at Georgetown.

Because of Yudell’s expertise and network—he’s published on genetics, race, and autism, and he coedits a book series on race, inequality, and health for Columbia University Press—medical and public health history are common themes at Study Hall. Jacqueline Antonovich, assistant professor of history at Muhlenberg College, has participated twice. Antonovich studies women physicians in the American West, so she decided to answer the one question that people always ask her in her first lecture: “Were you inspired by Dr. Quinn, Medicine Woman?” (Answer: no.) “I did a fun lecture on debunking Dr. Quinn, comparing the TV show to real-life woman physicians in the West, and telling the story of a woman physician who owned a bear named Pickles,” she said.

Historian-participants in the show confirm that the comedians handled their topics with care.

Antonovich’s second Study Hall lecture was directly inspired by her public health history course. “I had just finished a lecture on the history of STDs, and some of the early treatments for syphilis always make my students laugh and cringe at the same time. It seemed like the perfect topic” for a comedy show. She is always looking for ways to connect academic and public history and has found Study Hall a new fun way to do that. “People don’t realize that, buried within our very serious research notes, historians have lots of weird anecdotes and funny tidbits of information. These stories can be a great way to hook people into larger, more significant histories, whether that’s in front of the classroom or on a stage. Plus, humor is a wonderful teaching tool.”

Study Hall also gives scholars an opportunity to try out new material. Kelly O’Donnell, a historian of medicine and women’s health who lives in the Philadelphia area, didn’t want to choose a topic that might be too weird for a general audience, so her usual work on abortion, the menstrual cup, and the side effects of oral contraception was out. But “fortunately, I had recently published a blog post about a creepy, but historically significant, hand puppet called Pinkie.” Using images of the puppets that she had found on eBay and in the archives, she told the story of “how doctors’ wives obsessively made these for sick kids for decades and explained how this bizarre material culture object could tell us a lot about the history of health care in the mid- and late-20th-century US.” These visuals were an important part of the story. “The puppet itself is inherently funny, just looking at it, so I think it worked really well as a starting point for their improv,” O’Donnell said. She is already thinking about what topic she could cover during her next visit.

With six years of shows under their belts, Study Hall isn’t going anywhere. Yudell is always looking for historians and other experts to participate. “For anyone willing to take that leap, be vulnerable, and see their work twisted and respected at the same time—it’s a great opportunity,” he promises. The next time you’re visiting Philadelphia on the second Saturday of the month, check out the show. You’ll find some laughs and probably learn something too.