Rumors of War Arrives in the South

Richmond, Virginia, now has Rumors of War. The enormous new monument, featuring a young African American man in contemporary street clothes astride a rearing horse, was unveiled on the front lawn of the Virginia Museum of Fine Arts (VMFA) on December 10, 2019. Artist Kehinde Wiley’s response to the line of imposing Confederate leaders that tower over Monument Avenue only three blocks to the east, the statue is the latest and perhaps most profound contribution to the nation’s reexamination of the Confederate memorial landscape currently underway. 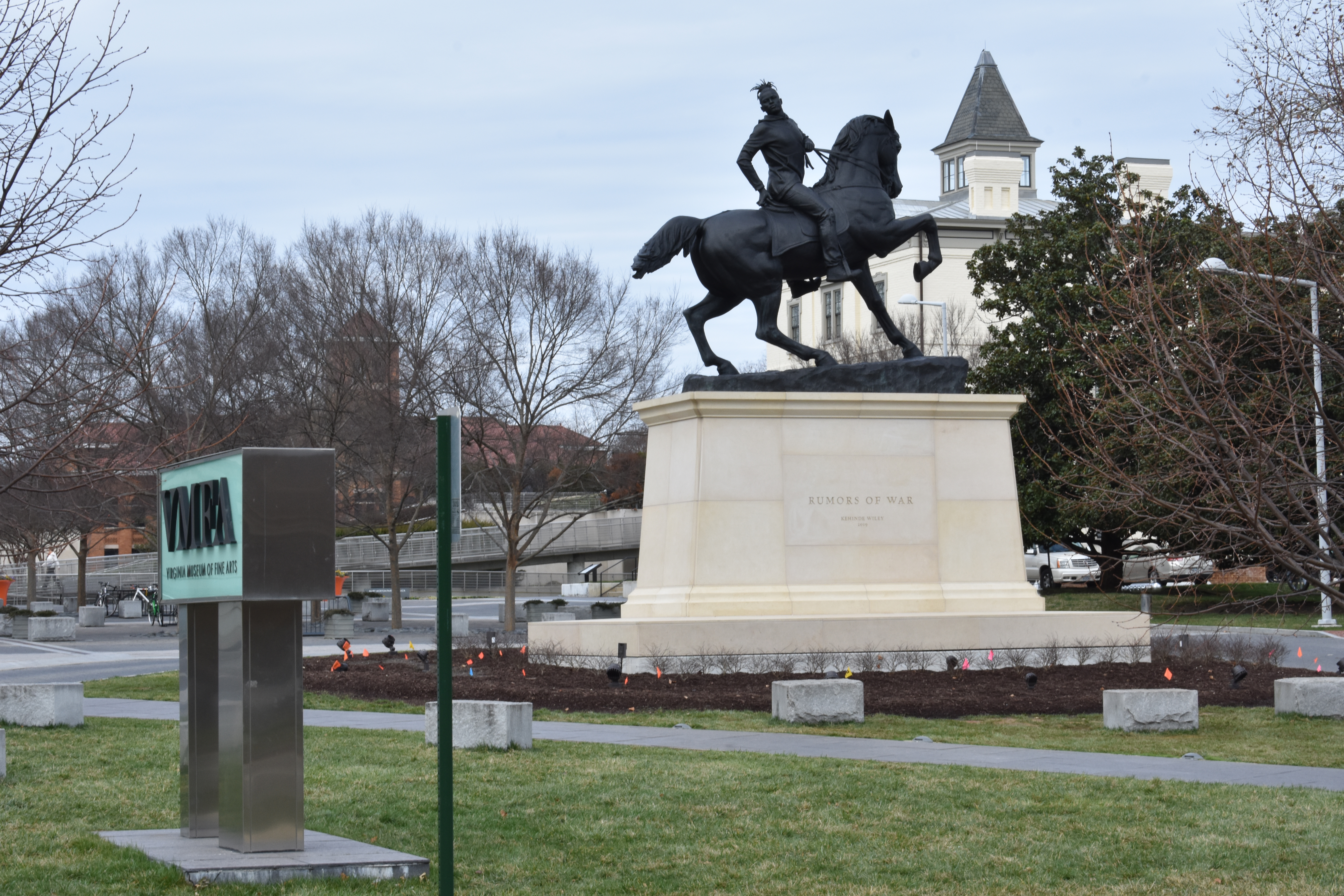 In Rumors of War, Kehinde Wiley blends a modern figure with the classic form of a mounted soldier. Ryan K. Smith

Wiley is best known for his vivid paintings of African-Diasporic subjects set within European art traditions, as well as his official portrait of President Barack Obama for the National Portrait Gallery. Rumors of War, his first monumental sculpture, grew from his time in Richmond during a major exhibition of his work in 2016. Amid debates over Confederate statues, Wiley was struck by the forceful sculptures on the city’s famed Monument Avenue. He has described them as “totems of terrorism,” which had been “designed to terrorize the black communities and to allow them to know exactly where they sat within the social hierarchy.”

Indeed, Monument Avenue’s place as a commemorative residential boulevard began a generation after the war with the unveiling in 1890 of the 21-foot-high Robert E. Lee equestrian monument atop a lavish 40-foot stone base. A sequence of similarly oversized Confederate monuments followed: the equestrian sculpture of cavalryman J. E. B. Stuart in 1907, the neoclassical memorial to Confederate president Jefferson Davis that same year, the equestrian sculpture of general Thomas “Stonewall” Jackson in 1919, and the recumbent sculpture of diplomat Matthew Maury in 1929. All were framed by roundabouts along the wide tree-lined avenue two miles west of Capitol Square. Their unveilings were accompanied by massive parades and reunions during the era of disfranchisement and racial segregation. Historians have called Monument Avenue “the centerpiece” of Lost Cause commemorative efforts in the early 20th century.

Revising that legacy would prove especially difficult for Richmond, as state law prevents localities from removing or modifying “monuments or memorials for any war” and a considerable range of opinion remains regarding their proper fate. A prologue to those conversations occurred 20 years ago, when the Richmond City Council helped arrange a tribute to African American tennis star and humanitarian Arthur Ashe, a Richmond native, at the end of Monument Avenue. The resulting portrayal of Ashe, featuring a slightly larger-than-life figure, surrounded by children and holding aloft a tennis racquet and books, challenged the monumental power of the nearby Confederates—but in a limited way.

Historians have called Monument Avenue “the centerpiece” of Lost Cause commemorative efforts in the early 20th century.

Aiming to address his campaign’s position on providing context for the monuments, Richmond Mayor Levar Stoney convened a commission in June 2017 to solicit input and make recommendations for the future of the Confederate monuments along the city’s most famous street. Only two months later, a deadly protest occurred in nearby Charlottesville over monument removal. Richmond’s commission delivered its report the following year, calling for removal of the Jefferson Davis monument (“the most unabashedly Lost Cause in its design and sentiment”), the recontextualization of the other statues, and the commission of a new monument commemorating “the resilience of the formerly enslaved,” perhaps via a work dedicated to the United States Colored Troops. On the other hand, the commission acknowledged that roughly half of those providing public feedback had expressed a desire to keep all the monuments in place in some form.

In the midst of these deliberations, local art patrons William and Pamela Royall approached Kehinde Wiley’s gallery for an update on what they had heard of the artist’s plans for a related sculpture project. They lobbied for the first piece of that project to end up in Richmond and interested the board of the VMFA in its acquisition. This would allow for its installation at the museum, next door to the headquarters of the United Daughters of the Confederacy, on the boulevard that intersects with the Stonewall Jackson statue on Monument Avenue.

Additional Confederate connections charged the museum’s grounds. In the rear of the VMFA stands a Confederate Memorial Chapel from 1887, which served the R. E. Lee Camp Confederate Soldiers’ Home that operated on the site for more than 50 years. Over the past decade, the Virginia Flaggers and other heritage groups have called on the VMFA to replace Confederate battle flags removed from the chapel’s exterior. The museum’s board declined, so protestors started a weekly practice of flying enormous Confederate flags of their own on the VMFA’s front sidewalk, leading to occasional contentious interactions with passersby. Over these same years, the Sons of Confederate Veterans lost its lease on the chapel, further inflaming tensions. Placing Wiley’s new monument on the museum’s front lawn physically positions it within the debates.

Wiley’s work engages with these controversies through creative reframing.

Wiley’s work engages with these controversies through creative reframing. He used the Stuart monument for direct inspiration, calling its active pose “convincing and stylized and evocative and strangely beautiful.” He designed a nearly identical rearing horse, mounted by a figure modeled on Najee Wilson, a 32-year-old from Charleston, South Carolina, with a composite face to represent black men at large.

The sculpture was initially unveiled in New York City’s Times Square in September 2019 during a triumphant ceremony. Three months later, its removal to Richmond and unveiling on the VMFA’s lawn before a crowd at least 1,000 strong marked a turning point in the larger conversation. Art had taken action in the face of political stalemate.

In Richmond, Wiley told the crowd, “There is something moving in the culture, and there is something changing in these winds.” He explained that he wanted his piece to be “about black men and their place in this society, but in a much broader way a society that can say yes to black men.” He hoped that “you’re able to see those people that you once considered peripheral to your society, those voices that you once considered to be incidental to the grand narrative, and you’re able to say, this is monumental.” Wiley told the Richmond Times-Dispatch that he “couldn’t think of any better place to have this than the former capital of the Confederacy, in a place where we see America at a crossroads.”

The unveiling did not go off without a hitch. As the crowd gathered and a marching band played, attendants hired by the United Daughters of the Confederacy next door worked to keep attendees off its lawn. And at the moment of unveiling, the monument’s tarp became stuck on the figure’s upswept hair, requiring a firefighter to cut it loose.

Art had taken action in the face of political stalemate.

Still, excitement has remained high. The monument’s title, Rumors of War, points to the words of Jesus in the New Testament: “You will hear of wars and rumors of wars, but see to it that you are not alarmed” (Matthew 24:6). As such, it speaks directly to times of change and anxiety. That change is embodied in the statue’s bronze form, which rises 27 feet high on its granite pedestal. The figure wears jeans, a hoodie, and Nike sneakers, a recognizable assemblage. Its general correspondence to the Stuart monument is uncanny. The Richmond Times-Dispatch has created a digital tool that allows viewers to see how closely aligned are the form and pose of each monument’s horse. But the rider provides all the difference, making the racialized nature of the earlier statue plain.

Rumors of War is not alone in changing the city’s landscape. The Boulevard in front of the VMFA was renamed Arthur Ashe Boulevard in the summer of 2019. Only two years earlier, a statue of pioneering African American banker Maggie Lena Walker was dedicated on Broad Street, the city’s main commercial thoroughfare. Throughout town, activists have been working to recover the thousands of African American graves in cemeteries that until recently had been lost to vandalism, development, and overgrowth. The city’s historic slave-trading district has drawn national attention for its commemorative potential. Two city schools with Confederate or slaveholding namesakes have been renamed, including Barack Obama Elementary School, formerly J. E. B. Stuart Elementary.

Looking forward, in January 2020, the Richmond City Council formally asked the state for control over the fate of its Confederate monuments, while the state legislature voted to eliminate legal restrictions that prevented local municipalities from removing such statues. And councilwoman Kim Gray is seeking to implement the Monument Avenue Commission’s recommendation that a new monument to the United States Colored Troops be raised. In all these ways, the city is situating itself differently from other locales like New Orleans and Baltimore, which have removed prominent Confederate statuary, and communities like Charlottesville and Chapel Hill, where political unrest has driven the conversation.

Even so, the city and so many others like it remain mired in the high rates of poverty, murder, incarceration, segregated housing and eviction, and disproportional educational opportunities that continue to afflict black residents and other minorities, despite the changes in the monumental landscape. Noted Richmond columnist Michael Paul Williams observed when Rumors of War was unveiled that “art, which on Monument Avenue and elsewhere has divided us, has the potential to heal. But that will happen only if we seize the moment to bring tangible meaning to the symbolic force of Kehinde Wiley’s striking statue, and fashion justice and equity out of a legacy of injustice and inequality.” In Richmond, the black rider atop a rising horse viscerally bridges past and present while pointing a challenging way forward.