In October 2019, University of Louisiana at Lafayette undergraduate student Shydee Johnson introduced her history class to her hometown. Enrolled in a course that collected oral histories and interacted with the community around the state, Johnson was excited to bring her classmates and their historical research to the music festival organized by her family’s radio station, Louisiana Proud KBON 101.1. Johnson loved being able to connect her university and home lives. “Not only was it tremendously successful, with over 100 visitors,” Johnson said, but “my classmates and Dr. Skilton were introduced to a huge piece of my life and heart, a 22-year-old radio station that continues to defy the odds.” 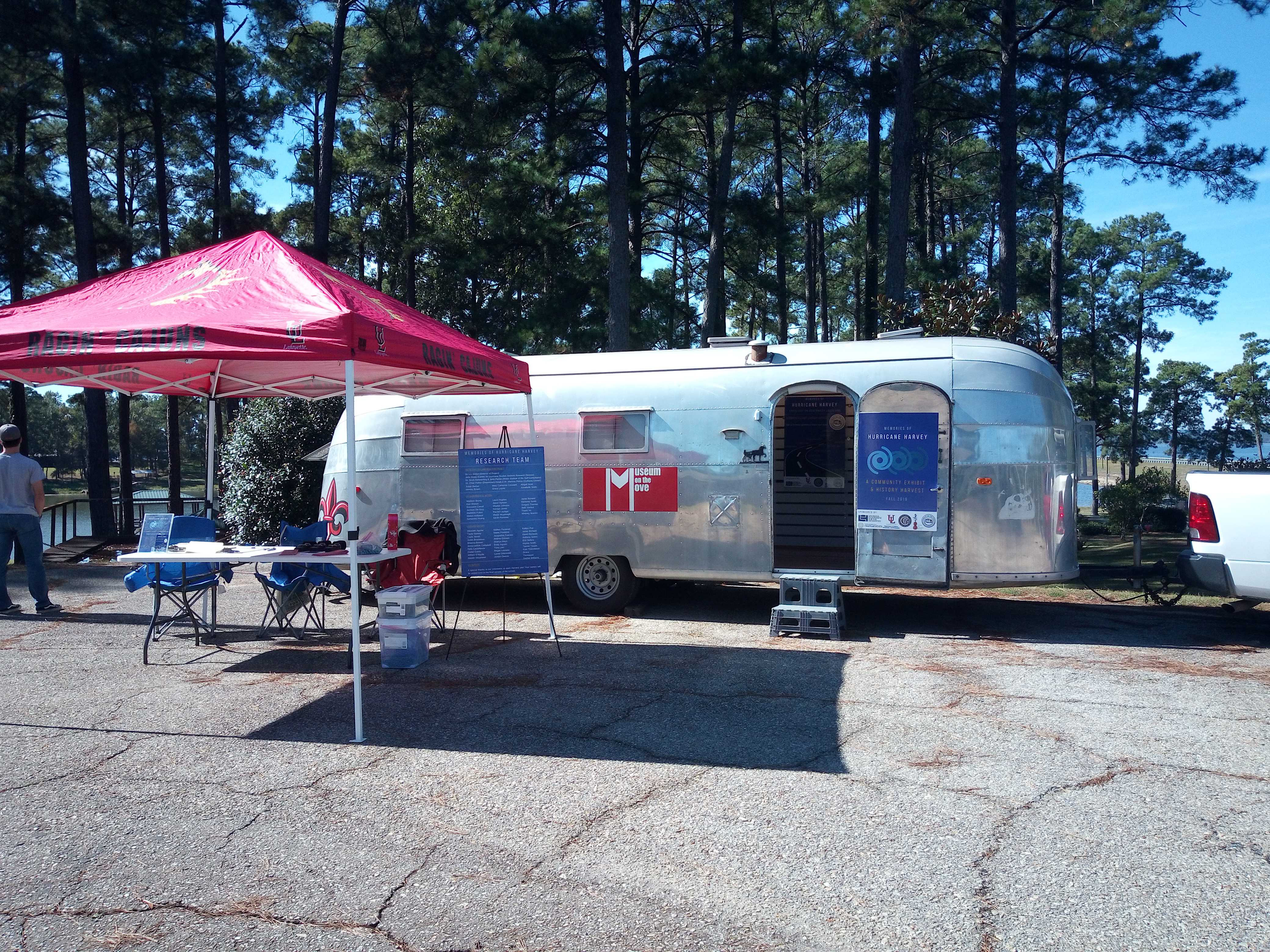 The Museum on the Move, housed in a 1954 Airstream trailer, accompanied Liz Skilton’s history students on trips around Louisiana. Each week, students reworked the exhibit to reflect the information gathered in previous trips. Courtesy Liz Skilton

Over the last four years, Liz Skilton and her history students at ULL have created the Recent Louisiana Disasters Oral History Project. They have traveled around Louisiana to record local experiences of disaster, visiting 36 of the 64 Louisiana parishes since 2016. Covering the Lafayette theater shooting, the 2016 Louisiana floods, and Hurricane Harvey, they have created an archive of materials on gun violence and climate change in the 21st century.

During community events, using the History Harvest model, Skilton’s students interview Louisianans about these disasters, asking questions such as: How do individuals and communities experience disaster? What was the immediate and long-term response? How did they rebuild? In courses like fall 2019’s The Historian’s Craft and Louisiana History, the students learn directly from the community about the importance of local history and the uses of oral history.

In 2019, the project added a new component: a Museum on the Move. The museum—housed in a 1954 Airstream trailer owned by the Lafayette Department of History—was used previously for exhibits on the history of Louisiana women, the oil industry, and Mardi Gras. With this addition, students conducted two types of interviews: oral histories of Hurricane Harvey and participants’ impressions of the museum. The museum itself evolved throughout the semester and was constantly updated to reflect the new information learned in interviews.

Skilton began the Recent Louisiana Disasters Oral History Project by collecting the stories of those affected by the 2015 mass shooting in Lafayette. On July 23 of that year, a gunman killed two people and injured nine others at an evening showing of the comedy film Trainwreck. The shooting led the film’s screenwriter and star, Amy Schumer, to become a gun-control advocate; she has appeared with her second cousin and now Senate Minority Leader Chuck Schumer to call for stricter laws and increased mental health services.

National attention quickly moved on, but researchers wanted to know more. As part of a team funded by the National Science Foundation, Skilton’s role “was to document and provide data on the historical effect of the mass shooting in the community.” As in many places that survive such gun violence, “there was an outpouring of response to the mass shooting incident, such as the creation of the #LafayetteStrong movement,” Skilton said, “and I wanted to measure this at different moments post-incident.”

Covering the Lafayette theater shooting, the 2016 Louisiana floods, and Hurricane Harvey, Skilton’s students have created an archive on gun violence and climate change in the 21st century.

Teaching in Louisiana offers a unique opportunity for a historian of disaster like Skilton. In 2017 and 2018, she turned to collecting stories of the 2016 Louisiana floods, centered on the one- and two-year anniversaries of the flooding. This research resulted in a podcast created by two of her undergraduate research assistants. With storms like Hurricanes Katrina and Rita devastating the state, Louisianans have experienced varying levels of catastrophe, and each has a story about these events. And it is likely that climate change will lead to stronger storms, increased damage, and the further loss of American lives in this low-lying state.

“Sometimes a community is interested in talking, but other times it is not,” Skilton has learned. “But I do find that communities where we have an established field-work record are more apt to work with us in the future, and even at higher rates of participation.” And Skilton’s understanding grows with each new oral history project. She’s learned how to answer a number of questions over the last four years. “Do you set up at a festival or a library? How do you advertise it? How do you make sure you’re getting a wide range of the population to come out?”

The 2019 project, collecting on Louisianan experiences with Hurricane Harvey, was the most ambitious yet. Funding from the Louisiana Endowment from the Humanities, part of a larger rapid-response grant to study the effects of Hurricane Harvey from the National Endowment for the Humanities, helped Skilton and her students hit the road. Between September and November, the students piled into a van each weekend and, accompanied by the Airstream museum, visited all 12 parishes that were declared federal disaster zones when Harvey made landfall in August 2017. Students learned that just because a disaster zone was declared, that doesn’t mean the area was decimated by the storm. Though most associate Harvey with devastation in Texas, these Louisiana parishes played a huge role in the disaster response. One parish was the site of a mega-shelter for evacuees from across Louisiana and Texas, and stories from first responders became a major focus of the 2019 collection events.

An immense amount of work went into planning and implementing 12 trips around the state. Graduate assistant Annabelle Smith was pleased to see their hard work pay off at their first site visit. Along with undergraduate assistants Mary Catherine Constant and Wesley Brown, Smith was responsible for some of the early organizing, contacting site hosts in the early stages of planning and spearheading the publicity for these events. “The first time I saw the museum completely put together and in the field for our Natchitoches history harvest,” Smith said, “it was incredibly rewarding to see all of our hard work come together and see people’s interest in what we were doing.”

All materials from the Recent Louisiana Disasters Oral History Project will be donated as an archival collection to the Center for Louisiana Studies.

Constant concurred: “I was showing someone our mobile museum in Acadia Parish, and as we were walking out, they told me that what we are doing for Harvey is really important, and they are glad that we are doing it.” She is proud of their work: “These disasters affect our communities, and they have the power to change someone’s life irrevocably if we aren’t knowledgeable about them.”

The oral history aspect of the classes was new for many of the students. Brown interviewed the mayor of Lake Charles, Louisiana, learning “how a mayor of a large city deals with a hurricane during and after the storm; what actions are taken by the government on the local, state, and government levels; what condition the community is in after the hurricane; and the steps taken to achieve change.” Conducting oral interviews and transcribing them were new skills that Brown learned in the course that could be useful in many professional fields.

Students also created their own historical interpretation of these recent events. Those in the Louisiana History class created podcasts, using local history research and their interviews to build a picture of each parish they visit. The Historian’s Craft students were tasked with updating the museum exhibits and interactive elements displayed in the Airstream on each site visit. The exhibits changed with the information they gleaned from previous site visits, making the museum itself as much a part of the collection project as the oral histories.

Along with the oral histories themselves and student creations like podcasts, Skilton’s team has been building a series of maps that visually show disaster across these different projects. Students used data collected at site visits to map individuals’ experiences during the hurricane against rainfall and electricity outage data using GIS modeling. All materials from the Recent Louisiana Disasters Oral History Project will be donated as an archival collection to the Center for Louisiana Studies.

Skilton hopes that these collection events will continue in future years, and she is still figuring out how to use all of these new sources. “One of the things that we find,” Skilton said, “is that people want to know that their story was not only preserved, but that it was used and used quickly.” Academic publishing can take a long time, so she and her students are “thinking through how we can better participate, in a digital age, in ways that allow for analysis of these sources we’re collecting, but that also process and present the material in rapidly.” Podcasts have been one way of analyzing the material quickly, allowing people to listen and participate in the analysis.

Using their 2019 data, the students created one last exhibit. According to Skilton, they got to “take our research (which was structured and changed with their input) and analyze and present it in the final form.” The resulting museum exhibit, “Reflections of Hurricane Harvey in Louisiana,” is on a local tour through spring 2020.