Reflections from the 2014-15 AHA/NASA Fellow in Aerospace History, Brian Jirout

Maps are everywhere. They can be found on street corners in cities, in our history classrooms, and perhaps most recognizably, on the Internet in the form of Google Earth and MapQuest, among others. These two web-based platforms provide geographic information that covers the entirety of the planet’s surface. Data of this sort, however, has not always been readily accessible. Before 2008, Earth imagery was very expensive to collect, process, and distribute via satellites and data centers; and it was subject to national security controls, federal budget restraints, and legislators and policymakers keen to privatize space operations. For example, much of Google Earth’s base imagery comes from a multibillion dollar series of seven Earth remote sensing satellites called Landsat, a US Geological Survey (USGS) and NASA program that began in 1972. 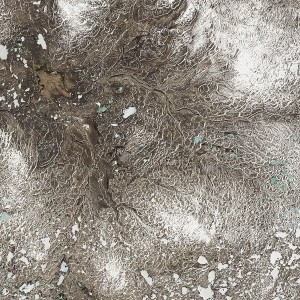 As the AHA/NASA Fellow in Aerospace History, I researched the history of the Landsat satellite program, tracing its evolution from an experimental satellite to an internationally situated commercial venture and finally into a public-private partnership managed by USGS and NASA. In 1966, William Pecora, then director of USGS, proposed the program and later in 1969 President Nixon gave a speech to the United Nations General Assembly pledging that the US would share its satellite data with the world. The US government intended for data to be accessible to all potential users; however, data became increasingly expensive in the 1970s and 1980s, and very few users had access to the necessary computers. Also, national security restrictions limited the satellite’s resolution. Data became particularly difficult to access in the late 1980s as the program became commercial, and prices rose to prohibitive levels ($1,000 for certain data) for many in academia and municipal government. Landsat 5 experienced difficulties in the 1980s and 1990s, and a failed Titan II launch of Landsat 6 suggested the Landsat program was near to its end. In a landmark decision in 2008, Secretary of the Interior Dirk Kempthorne announced that Landsat data would be free of charge to the public and available via the USGS’s website. The result has been millions of downloads and scientific investigations around the world.

This research took me from Atlanta where I have been completing my doctoral work to Washington, DC. I knew I wanted to live in DC since it is a vibrant, intellectually stimulating place to work, but also I had many archives and government agencies I wanted to visit. I went to the National Archives in College Park, the National Academy of Sciences (NAS) archive, the NASA History Office, and the USGS Headquarters. I also went to New York City to visit the United Nations Archive. Each place was hugely helpful, but it was the people I met that made these experiences so illuminating. Three experiences stand out in particular. The staff of the NASA History Office tirelessly helped me find records and make connections with individuals in other NASA centers who could inform my project further. I owe Raymond Byrnes of USGS similar thanks since he put me in contact with many people, allowed me to read his extensive collection of Landsat records, and took time ensuring that I understood and appreciated the nuances of the satellite program’s politics, policies, and technical details. Janice Goldblum at the NAS Archive also was very resourceful, finding records of committees that discussed the various techniques used by scientists to gather data of the planet’s surface in ways I had not imagined. My project requires knowing the roles and policies of several government agencies, so it was an incredible experience visiting those agencies where I could meet the civil servants who have ensured Landsat continues to operate and the archivists who know these agencies so well. My experience in Washington leads me to encourage those in our profession to reach out to not only archivists but civil servants who know their programs in such fine detail.

I offer my sincerest thanks to AHA and NASA for awarding me the Fellowship in Aerospace History.

Applications for the 2015-16 AHA/NASA Fellowship are due on April 1. Visit the AHA Grants and Fellowships page for more information about the NASA and Jameson Fellowships.

Tags: AHA Today Grant of the Week History of STEM